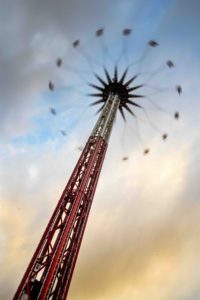 The summer of 2017 saw three towering StarFlyers by Funtime take flight across North America. The rides, which all offer breathtaking views of their respective properties, have quickly become icons in their new locations.

“North America continues to be a great place for us to grow,” said Hannes Lackner, general manager at Funtime. “We have sold a lot of tower rides in North America since 2011 and look forward to more in the near future.”

In Colorado the classic Elitch Gardens was spinning seventeen stories about the city skyline. The park was able to squeeze it into a small open area near their iconic Twister II roller coaster.

“The addition of Star Flyer Gardens gave parkgoers the opportunity to experience an all-new thrill ride combined with breathtaking panoramic views of their favorite park attractions, the Denver skyline and the Rocky Mountains,” said Karl Traeger, the park’s marketing director.

At Valleyfair outside Minneapolis, Minnesota, the 230 foot (70 m) North Star installation turned heads. As the second-tallest attraction at the park it looks great and added to the park’s skyline. In addition, the 44 inch (112 cm) height requirement means that a wide demographic was able to ride. Fearless kids were often seen encouraging their parents to take a trip over 200 feet (61 m) in the sky, a unique reversal in traditional amusement park family dynamics.

“North Star is the only ride of its kind in the upper Midwest,” noted Brad Marcy, general manager at Valleyfair. “Guests love experiencing the beautiful views of the Minnesota River valley from 230 feet and North Star’s lighting package brings the Valleyfair skyline to life at night.”