Everything changed in 1994. With the launch of the Space Shot, the world’s first vertical amusement ride, S&S Power, now S&S Worldwide, took the outdoor amusement industry to new heights. Here’s an update on the company’s recent activities, including its new kiddie ride collection.

Happily for S&S, parks are continuing to buy big rollercoasters. “We currently have under contract and are continuing to contract several high-thrill air-launched coasters and our third 4th Dimension coaster,” reveals CEO Rich Allen.

Yet the company is also aware of present market conditions. “S&S is very sensitive to the challenges of the current economic climate,” acknowledges Allen. “Given that the demand for big coasters will fluctuate, we’ve developed a number of other exciting coasters that are affordable for almost any park, including Free Fly, El Loco and a new retro mine train coaster. We also have new collection of family rides.”

The Huli Hu, for example, is a brand new ride concept. The prototype will be called Monkey Madness (or Mini-Hu), part of S&S’ new Critter Collection of kiddie rides (see panel, left). Passengers ride a catapulting, spinning coconut tree accompanied by mischievous monkeys. The near miss perception of the cars spinning past one another and the tropical theming create an exciting ride experience for all ages.

The ride itself comprises two arms, each of which swings 180 degrees from a central hub. Four passengers are seated in each teacup-style car, facing inwards. As the ride reaches speed, the arms rise vertically and then continue to horizontal in an opposite orientation. Each of the ride vehicles can freely turn or spin as the passengers turn the wheel in the centre.

Three kiddie rides from S&S’ new Critter Collection were exhibited for the first time at IAAPA Attractions Expo in Orlando. The rides have been designed and engineered as true family attractions, with seating for children over 0.9 metres (36 inches), but parents and grandparents will also be able to ride. 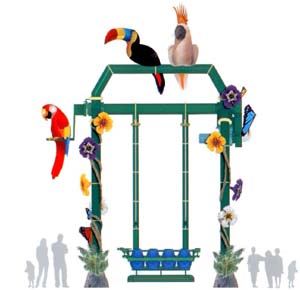 As well as Monkey Madness (see “New Concepts,” below) there is Jungle Swing (pictured below), plus a new version of S&S’ popular Frog Hopper. Each has been designed as a standalone piece, but the entire collection also provides a unique, well-themed, complementary set of rides for any amusement facility.

The new small rides division at S&S is being headed by Kathy Archer, under the general direction of Kevin Rohwer. S&S anticipates that these affordable and innovative new rides, manufactured with the quality upon which the company has built its reputation in the amusement industry, will be a successful addition to the company’s product portfolio.

S&S has a number of exciting new projects nearing completion. In the next 12 months, the company will launch the long awaited Ring°Racer coaster in Germany, three launched coasters in China, a Screamin’ Swing at Dollywood, a 4th Dimension coaster in China, an El Loco coaster in France and several large tower projects.

When Ring°Racer opens in 2011, at Ring°Werk in Nürburg (alongside the Nürburgring race track), Allen promises, “our incredibly smooth launch system will astound and delight adrenaline junkies from around the world. While there has been much talk in the industry about coasters claiming to be the world’s next fastest, we are deferring the announcement about Ring°Racer’s operational speed to be made by the Nürburgring at the time they deem appropriate.”

As for the EL Loco coaster in France, it will open at Fraispertuis City in Jeanménil, between Nancy and Mulhouse, in mid-June. The park’s owners, the Fleurent family, had been looking to add a new coaster for several years, but it was only last month, at Euro Attractions Show in Rome, they signed the deal with S&S. Similar versions of the ride can already be found at Indiana Beach in the United States (where it is called Steel Hawg) and Flamingoland in England (Mumbo Jumbo). Although the model going to Fraispertuis City is the same, it will feature an even steeper first drop – 113 degrees – setting a new world record.

Check out the company’s new look website at: www.engineeringexcitement.com 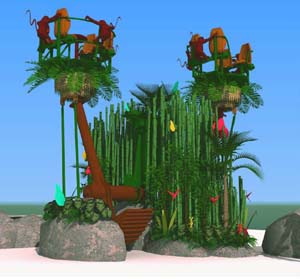