S&S Worldwide has issued a statement in response to a local newspaper report from Dongguan, China, confirming that the American company is responsible for the delivery of the country’s first “4th Dimension” Coaster.

The article, which was published in Dongguan Today, suggested that a local company was “making” the coaster for Changzhou Dinosaur Park, however S&S stresses it is merely a subcontractor.

“This coaster is so amazing that it is not surprising that a vendor might want to take credit for it,” says S&S’ vice-president of sales and marketing, Kevin Rohwer. “However, it is important to the integrity of the amusement industry that S&S immediately correct any misconceptions that may have been caused by the false and misleading news report in China. We are very excited about this project and are looking forward to the opening of this great attraction for the people of China.”

The full statement from S&S reads as follows:

S&S Worldwide Inc is the sole owner of the 4th Dimension Coaster technology (through the company’s 2002 acquisition of Arrow Dynamics). Under a contract with Dinosaur Park in Changzhou, China, S&S Worldwide is currently building a 4th Dimension coaster, arguably the most technologically advanced coaster on the planet. As is typical with coaster and amusement ride projects, S&S is contractually responsible for all aspects of the 4th Dimension coaster, including design, engineering, fabrication, and installation oversight and supervision. It was falsely reported that the coaster is being built by Guangdong Qiguang Group Co Ltd.

The 4th Dimension coaster is unlike traditional coasters, where trains only parallel the track, as the 4th Dimension seats extend off of the track to the sides of the vehicle and allow the passengers to be independently rotated head over heels and forward and backward. The passengers go screaming around a 3,600-foot maze of steel track aboard massive wing-shaped trains, and the ride’s 360-degree rotating seats move the passengers independently, creating head-first, face-down drops, and unique “don’t know what to expect next” excitement.

The ride is scheduled to open later in 2011. 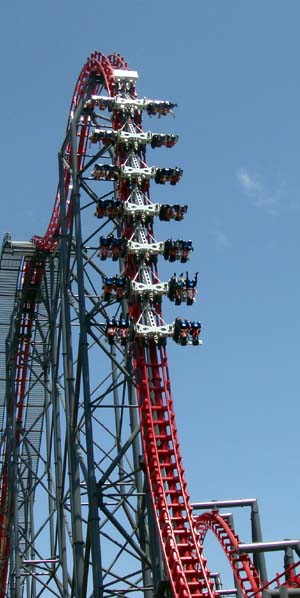