Located on the top floor of the Khalidiyah Mall in Abu Dhabi, Sparky’s Family Fun Park is the first leisure project in the United Arab Emirates for the Al Hokair Group.

The FEC chain is already strong in Al Hokair’s native Saudi Arabia, where the group operates over 70 amusement venues including the Smart Kids, Fun Town, Movie Town, Fun Studio, Digital Kids, Happy Land, Happy Farm and Oceanica brands.
Located in the densely populated Al Khalidiyah area of the UAE capital, Sparky’s debuted in Abu Dhabi in 2008, one year after the Khalidiyah Mall opened to the public, and caters for up to 3,500 guests a week.

Operations manager Tony Azzi concedes that there are already many other FECs in the area, including Fun City, Fun Zone and Wanasa Land, but that at Al Khalidiyah Sparky’s aims to offer value-for-money entertainment for a largely local crowd. “This is not a destination mall,” he highlights.

Brokered by Westech, the FEC’s key rides and attractions are all Italian-built, including several pieces by SBF/Visa. Featured are a Roller Coaster, Family Coaster, Coconut Drop (tower), Jamaica (Miami/Trapeze), Jolly Jump, Magic Plane and bumper cars. As might be expected, the Roller Coaster, which weaves its way through most of the building, is the most popular attraction. Additional FEC features include a 4D cinema, bowling alley, ice rink, soft play, and of course coin-operated games and amusements.

Al Hokair was due to open a second Sparky’s in Abu Dhabi at the Mazyad Mall. The group also operates a number of hotels throighout the UAE including a Golden Tulip-branded property in Dubai. 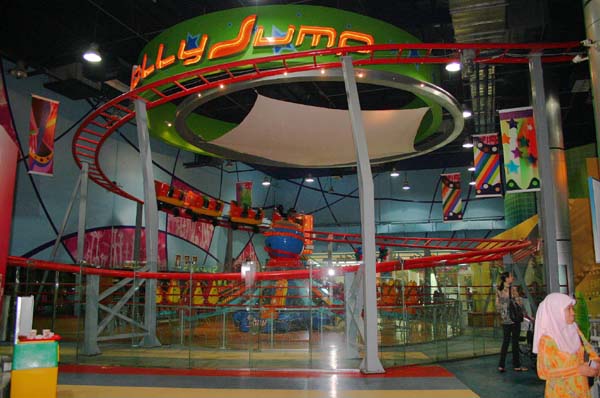