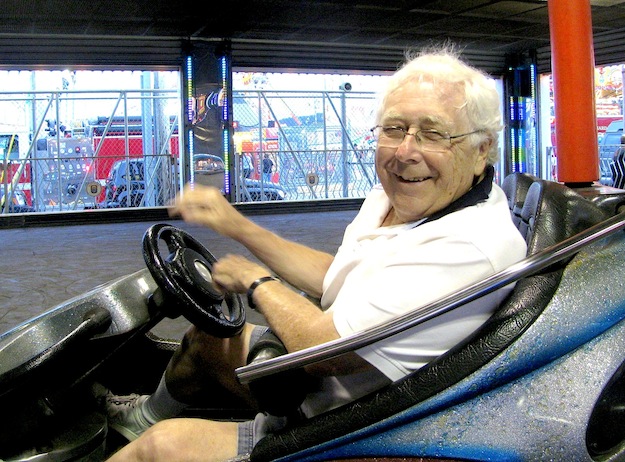 The winter of 2014/15 brought an unusually large amount of snow to North America. And with the snow came scenes on my television screen of automobile carnage on the slippery snow-covered roads.

Some accidents are avoidable, when drivers forget to adjust to road conditions. Others are not, like when a sheet of ice suddenly blankets the road. I imagine it was a profitable winter to own a collision repair shop. There was a lot of business. I’m always shocked by the cost to repair a small dent in my car. It’s never just one part that needs to be replaced, but a sequence of adjacent parts, too. Too bad they can’t make automobiles like they make bumper cars. That is, sturdy.

This year is the 94th anniversary of the bumper car (and also of the Battle of Dumlupınar, the final battle of the 1922 Turkish War of Independence. Turks like bumper cars, too). Bumper cars are one of the cornerstones of any amusement park. Can you think of a park or carnival without bumper cars? I can’t; they’re ubiquitous.

You and me, we’re bumper cars
The more I try to get to you
The more we crash apart, no
Round and round we chase the sparks But all that seems to lead to
It’s a pile of broken parts

An American invention, the original Dodgem (dodge ‘em) bumper car was a rear-steering monstrosity invented in 1922 by Max and Harold Stoehrer of Methuen, Massachusetts. During their heyday (late 1920s through 1950s), the two major bumper car brands were Dodgem and the Lusse Brothers’ Auto- Skooter, now both defunct. For many years the French company Reverchon was a leading manufacturer. That too has gone, but a variety of suppliers worldwide (notably in Italy, and increasingly China) continue to build ‘em, because the public continues to ride ‘em.

Although the idea of the ride is to bump other cars, safety or litigation conscious operators often put up signs reading “One way only” and “No bumping.” But these signs are often ignored by bumper car riders, especially younger children and, um, at least one senior rider.

Bumper car rides are delightfully chaotic. Drivers come with the full range of skill levels, and everyone on the floor is fair game to be hit. I’m pictured on the bumper cars at Palace Playland in Old Orchard Beach, Maine, having the time of my life. Strategy and skill both play a part in successful bumper car manoeuvring. Nose-to-nose collisions are unnecessary. If you aim your car to impact behind the centre of gravity of the car you are targeting you can turn it around while you continue on your merry way. Done with a smile, this is socially acceptable road rage.

Bumper cars have given generations of drivers, passengers and onlookers an acceptable and relatively safe outlet for automotive mayhem. With new styles and variations appearing often, their appeal remains strong. Amusement park guests won’t be dodging them any time soon.

SongSong Town – the FEC that made a shopping mall sing