Opening summer 2011 at the Mall of Arabia in Jeddah, Saudi Arabia, Snow Village will mark the realisation of a decade-long dream for Dutchman Kees Albers.

The 5,000 square metre facility will feature around 10 attractions pitched at families with children including snow tubing, snow mobiles, snow diggers, a snow ball zone, curling, a high ropes course and bumper cars on ice. The mall already boasts attractions including an ice rink and a small FEC, but its owners, the Al Hokair Group, hope Snow Village will help drive footfall to a forgotten corner. Developer Unlimited Snow is projecting an annual attendance of around 300,000.

Albers, owner of Unlimited Snow, first dreamt of creating an indoor snow park around 10 years ago, and twice came close to realising the project, first in The Netherlands and then in India, but ultimately his investors went cold (excuse the pun). Since them, several other developers have created similar projects, giving Albers time to watch and learn.

“I always thought the market for this would be theme parks but now there is a lot of demand from shopping malls, where rival operators want something to make them stand out,” he tells Park World. “However, if you look at Ski Dubai [at the Mall of the Emirates], 90% of the money went into sport, whereas 85% of revenue comes from play. That’s because people in Europe like to go skiing to practice for their holidays, but that is not the case in the Middle East.”

Unlimited Snow’s core competency is “in the plant room” (snow-making), but the company is working with up to 50 other firms to realise the park’s facilities, in many cases adapting existing products and technologies for the ice-cold environment.

Albers adds that he is in conversation with a further two shopping malls in the Middle East, as well as exploring opportunities in the UK, USA and India. His company also has a larger concept called Arctic World Resort (as pictured above), where skiing does play a major part. As well as a number of interconnecting slopes, each resort would also include snow play, igloos and guest accommodation.

Pictured below: A concept drawing for Snow Village at the Mall of Arabia 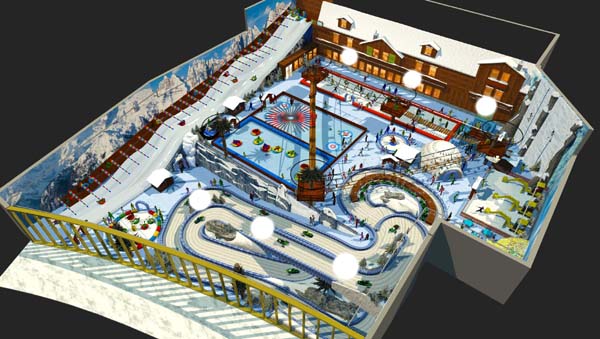 Choosing snow boots for beginners? Find out more at https://www.globosurfer.com/best-ski-boots-for-beginners.