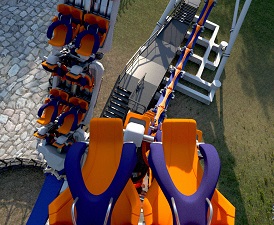 Skyline Attractions unveiled the lead vehicle from their newest ride, Skywarp, at the recent IAAPA Attractions Expo in Orlando, Florida. The ride, which will debut at Six Flags Discovery Kingdom in 2018, caps what has been an exciting year for the Florida-based company.

“To see Skywarp go from concept to thrilling riders in 18 months is exciting for us,” said Evan Souliere, founding partner at Skyline Attractions. “We have created Skywarp Eclipse, an even taller model, and Skywarp Horizon, a smaller concept that works well for indoor parks and malls.”

The team’s smaller attractions also are growing in popularity. In 2018 a Crazy Couch will debut as part of Adventureland, Altoona, Iowa, new Bernie’s Barnyard children’s area. Themed to ‘Pig Out’ the family ride will be natural fit in the park’s new country corner.

“We continue to receive a lot of inquiries about the Crazy Couch and Strike-U-Up,” said Chris Gray, founding partner at Skyline Attractions. “Clients are looking for kiddie and family rides from a U.S. manufacturer and we are thrilled to offer that option.”

Last fall Skyline sold their first international ride, a Crazy Couch, to Toy Town in Saudi Arabia. The indoor FEC had an immediate positive guest response to the attraction. In addition, a Strike-U-Up will debut at a new North American park in 2018. During the summer of 2016, the Strike received national attention as it was the centerpiece of a west coast advertising campaign by Credit Karma.

In addition to rides, Skyline has been hard at work on custom engineering and fabrication projects. In Branson, Missouri, the team engineered a new passenger vehicle for an observation tower at Parakeet Pete’s. They also designed and fabricated a shade structure, queue rail and fencing for Six Flags America’s new-for-2017 StarFlyer.

One of the company’s successful endeavors is the partnership with Great Coasters International. Skyline enjoys a unique position as the exclusive designer of GCII-built wooden coasters and wooden coaster equipment, and we are also at GCII’s exclusive service to provide design support and upgrades to wooden coasters around the world. Several of their designs opened this year, possibly the most notable being Mystic Timbers at Ohio’s Kings Island. The ride stands 109 feet (33 m) tall and features 3,265 feet (995 m) of undulating wooden track.

Ride Entertainment is the sales partner for Skyline Attractions.