Las Vegas’ Stratosphere Hotel & Casino has opened one of the world’s tallest SkyJump attractions. Located 855ft above the Vegas Strip, the attraction is best described as a controlled freefall.

Wearing jump suits, riders throw themselves of the tower while attached to a “descender machine” that regulates their speed to 40mph. Just before hitting the landing pad at the bottom, the jumper is slowed down for a controlled landing.

“SkyJump is a must-do for anyone looking to experience the ultimate adrenaline rush,” says Frank Riolo, CEO of American Casino & Entertainment Properties, which owns and operates the Stratosphere Tower. “It’s really not about the speed. The speed is actually nice because you get a chance to look around but you still feel like you are falling.”

SkyJump Las Vegas costs $99.99 per person and riders must be 14 years old to jump. Riolo has done so six times. Guinness World Records has declared the attraction the world’s highest commercial decelerator descent, breaking the previous record set by SkyJump at Macau Tower in China, which descends 764.4ft.

The 1,149-ft Stratosphere Tower is the tallest free-standing observation tower in the United States, featuring the Top of the World restaurant and highest view of the Las Vegas Strip from its observation deck. As well as SkyJump, it is also home to three other exhilarating attractions, Big Shot (an S&S tower ride) and X-Scream and Insanity by Intercative Rides. All three exploit the tower’s height and play with riders’ emotions. A notice on the elevator doors, for example, asks riders if they have brought spare underwear. 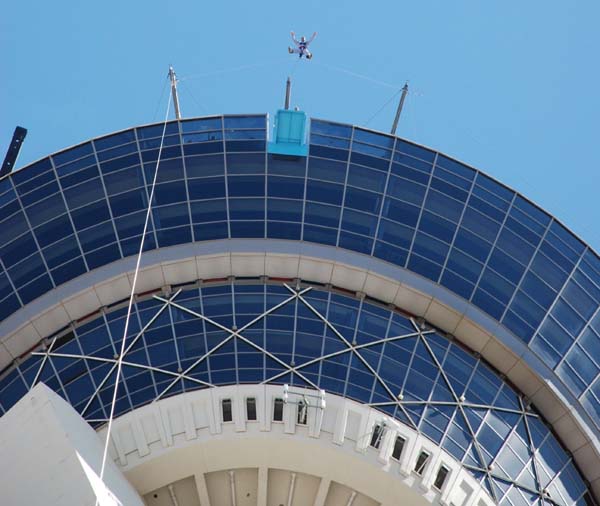