The English county of Cornwall is well known for its pirating heritage but now, for the first time ever, visitors to Land’s End can enjoy swashbuckling adventures in 4D form thanks to a Simworx Effects Theatre.See an exclusive video about the Land’s End 4D experience here.

Land’s End, as the name suggests, is one of the country’s furthest outposts, located at the south western tip of England. Unlike John O’Groats, which sits at the other end of the British Isles in the far north of Scotland, tourists here are catered for by a variety of attractions, operated by Heritage Great Britain.

Unveiled just before Easter with the help of a Captain Jack lookalike, Skull Rock 4D is part of a £600,000 ($915,000/€685,000) investment being this year at the Land’s End site. The 100-seat theatre, which includes a pre-show area, also features extensive theming, with rockwork and sea-faring figures to capture the public’s imagination.

The choice of the film Curse of Skull Rock, by Red Star Studio, was an obvious choice for Heritage Great Britain given the Cornwall coast location. The effects theatre replaces Return to the Last Labyrinth, a show dedicated to the heritage of Land’s End but which, after 21 years, was becoming something of a historical exhibit itself.

“The team down at Land’s End were enthusiastic about turning the Labyrinth into a 4D attraction,” notes Simworx managing director Terry Monkton. “The potential to promote each season with a new feature film, and thereby launch a new attraction each year, was very appealing to them.”

“It has taken five months of hard work, but we were delighted to open the theatre on schedule,” confirms Land’s End general manager, David Bryan. “All the guys from Simworx have been fantastic in terms of commitment and hard work.”

According to Bryans, “the bit that gets the biggest reaction is where the skull from Skull Rock comes on screen for the first time. The reaction from the crowd and the seat movement attached to it is just unbelievable!”

The theatre’s grandstand seating includes LED stair lights, carpeted floors and brushed aluminium handrails. Each seat is finished in black with a red headrest, and there are four seats at the front with wheelchair access. The very latest high definition Christie projectors are used, together with surround sound, a 3D screen and a show control system incorporating CCTV cameras.

It is this package – together with the added theming – that leads Monkton to make the modest claim, “I believe this is the finest 4D attraction in the UK.” 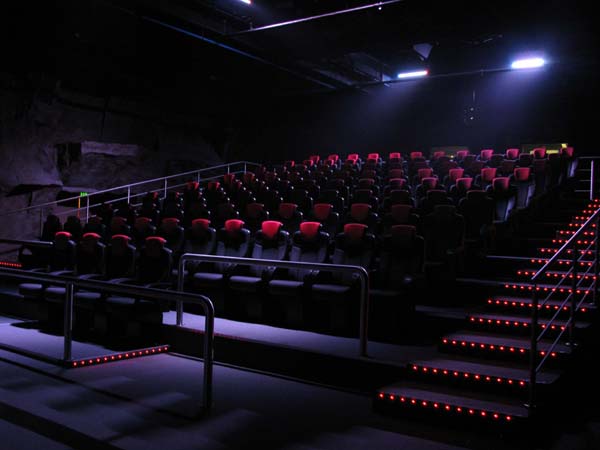 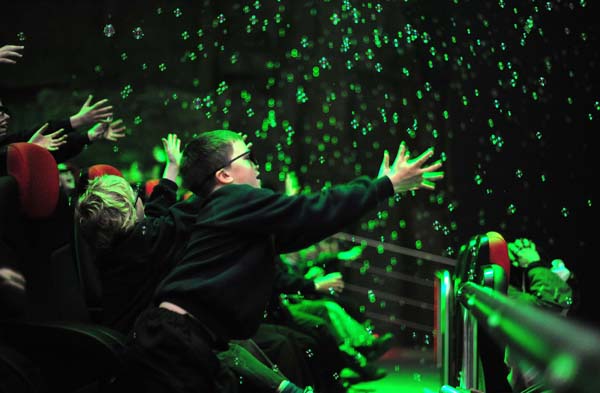 “We are very pleased with the response to the cinema so far,” adds Bryans. “It appeals to children and adults alike, and gives us another all-weather family attraction. We’re confident that it will have a positive impact on visitor numbers this season.”

Certainly the schoolchildren invited to watch Skull Rock during the launch event were enthusiastic. Asked for his thoughts about the effects theatre shortly after opening, one young audience member replied: “I have been to one in America, but I preferred this one!” Praise indeed.

Visitors making the trip to Land’s End are greeted by a variety of attractions. The End to End Story offers free admission and is devoted to those who have made the journey south from John O’Groats to Land’s End, or vice versa.

Visitors to the area can also stock up on souvenirs from West Country Shopping Village, enjoy a drink inside the First & Last Inn, or perhaps stay the night at the Land’s End Hotel.

The Land’s End site is one of the top tourist destinations in the South West of England, attracting over 400,000 visitors a year. In 2009 it posted a 15% increase in visitors, and now Heritage Great Britain hopes for even greater numbers thanks to the addition of Skull Rock 4D.

Pictured below: The 100-seat theatre by Simworx