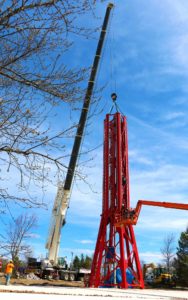 “As a shining beacon of Six Flags Darien Lake, this monstrous tower will serve as an iconic new landmark, calling out to thrill-seekers everywhere,” said Park President Chris Thorpe. “Soaring high among the clouds with majestic views of the park and surrounding countryside far below, guests will take to new, record-setting heights in New York State this season.”

By night, Six Flags SkyScreamer’s bold, synchronized light package will light up the skies. It is a soaring 24 stories tall and will accommodate 32 riders, sitting two across in open-air swings. It will spin in a 98 foot (30 m) circle at 35 mph (56 kph). Six Flags SkyScreamer is scheduled to open by the middle of this month.