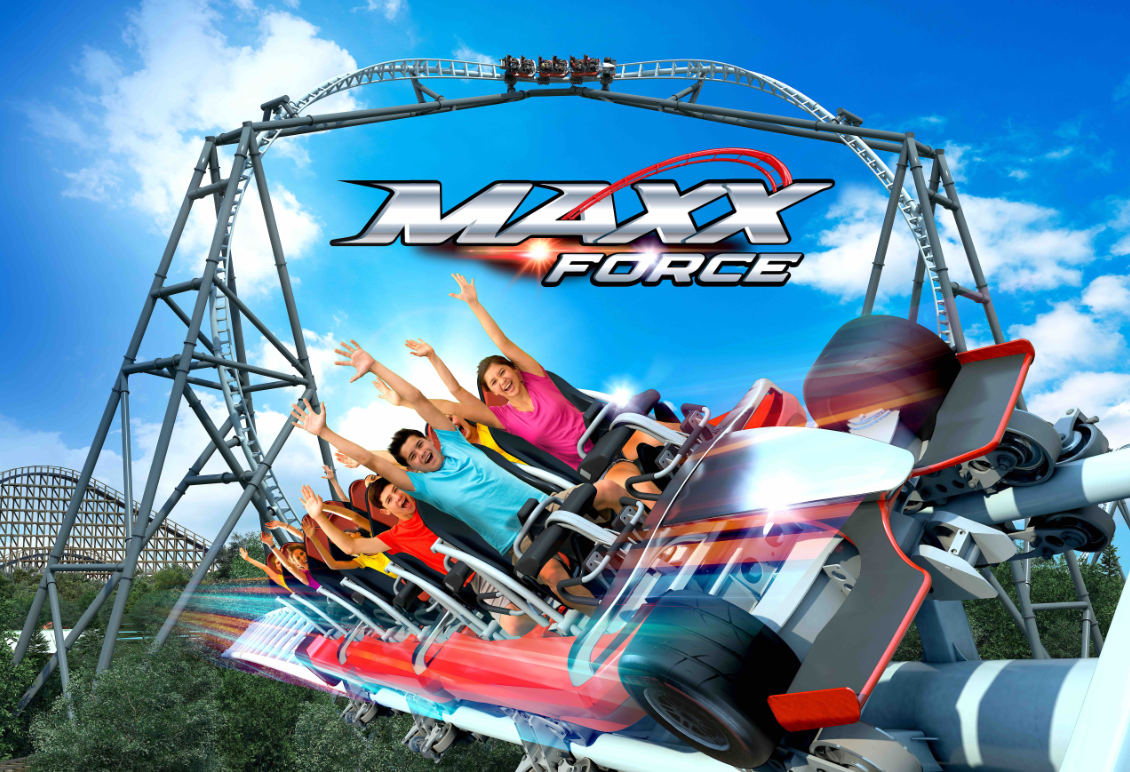 A collection of world record-breaking roller coasters and family attractions headline the 2019 Six Flags Entertainment Corporation lineup. There are also massive planned park upgrades and rebrands on the way, and Six Flags Season Pass Holders and Members can look forward to even more guest benefits and incredible new rewards next year.

“Year after year, Six Flags raises the bar to deliver unparalleled, world-class thrills for guests of all ages. Our 2019 lineup is by far the most comprehensive package of innovative rides, record-breaking attractions, and superior guest benefits in the industry,” said Six Flags chairman, president and CEO Jim Reid-Anderson. “The addition of five new parks greatly extends the company’s national footprint and gives our ever-growing Season Pass and Membership base more opportunities to visit our parks to experience the world’s biggest and most thrilling rides.” 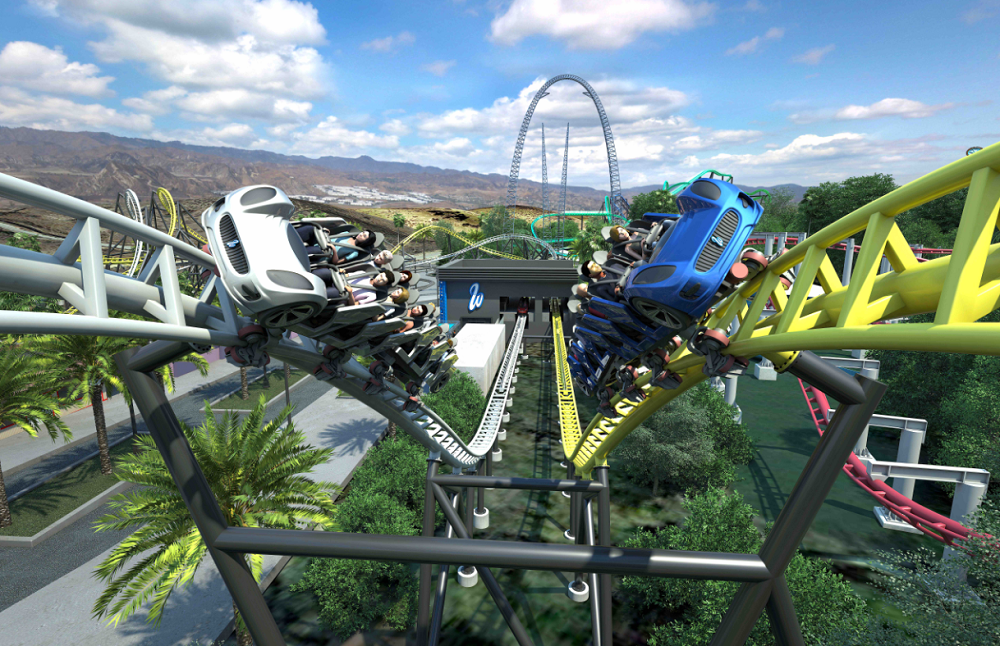 Thrill-seekers and fans of Six Flags Parks have much to look forward to in 2019. West Coast Racers, the world’s first racing launch coaster, will be opening at Six Flags Magic Mountain, Valencia, California. Designed in partnership with West Coast Customs, this one-of-a-kind racing coaster from Premier Rides will feature two side-by-side tracks with four individual high-speed launches. The race covers two complete laps, multiple airtime hills, extreme high-banked turns and exhilarating over/under near misses. A highlight of the ride is an immersive real time “pit stop” exclusively designed and produced by West Coast Customs. West Coast Racers will be the park’s 20th roller coaster, which is more than any other theme park. 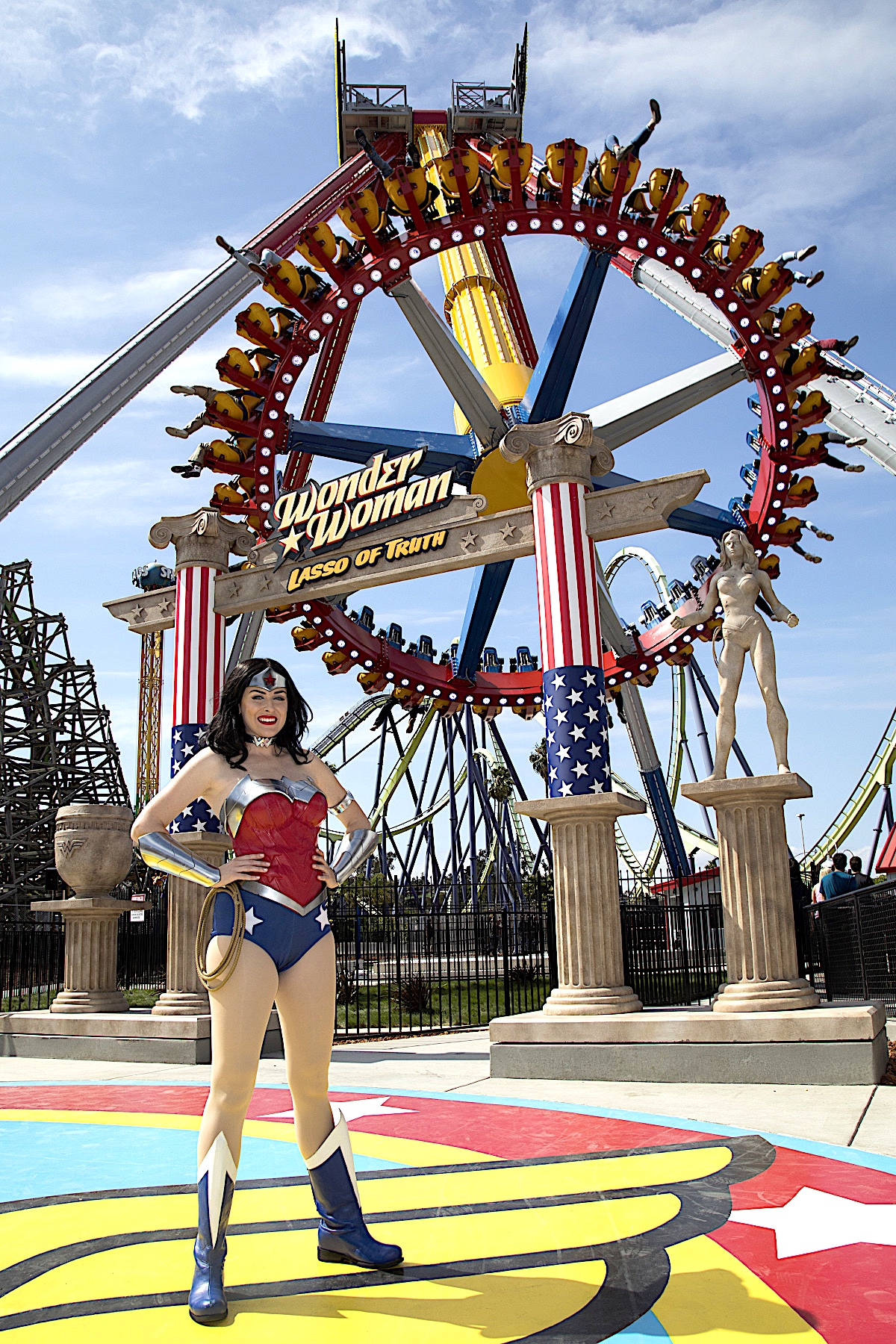 Six Flags Great Adventure, Jackson, New Jersey, will premiere one of the world’s tallest pendulum rides, Wonder Woman Lasso of Truth. Measuring in at a staggering 17 stories tall, this Zamperla Giant Discovery will reach speeds up to 75 mph as it spins and swings back and forth to breathtaking heights. The massive pendulum propels 40 riders in counterclockwise circles with feet dangling from floorless seats as they whirl through the air.

Six Flags Great America, Gurnee, Illinois, will debut a revolutionary, triple record-breaking, new roller coaster for the 2019 season. From S&S – Sansei, Maxx Force will be the fastest launch coaster in North America, accelerating to 78 mph in less than two seconds. Maxx Force will feature the fastest inversion in the world with a Zero-G roll more than 60 mph and the highest double inversion of any roller coaster in the world at 175 feet above the ground. It will also feature one-of-a-kind custom coaster trains modeled after Formula 1 racing cars. 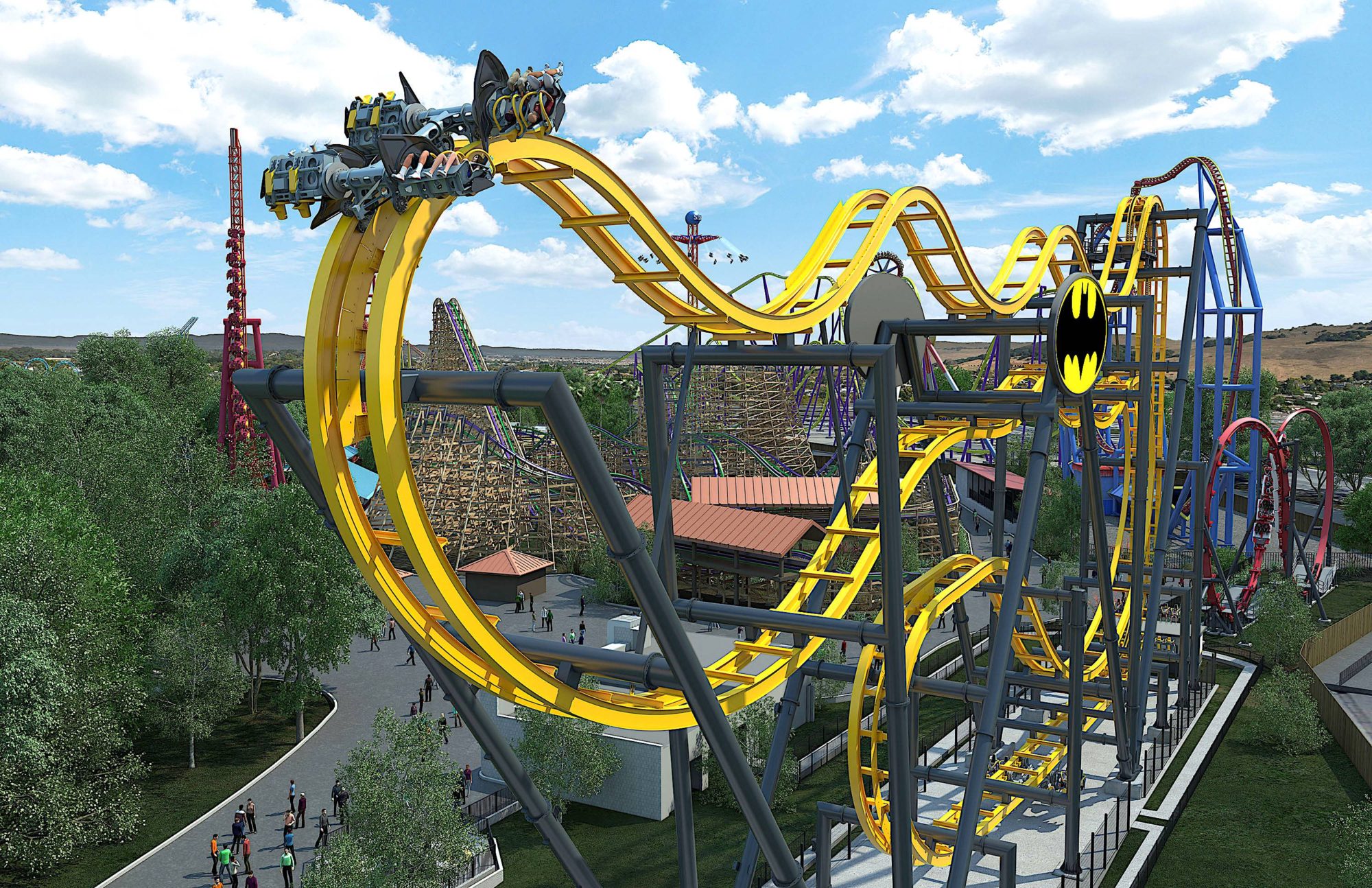 Six Flags Discovery Kingdom, Vallejo, California, is adding to its thrill arsenal with the park’s most innovative new coaster to date, Batman: The Ride, themed after one of the world’s most iconic DC Super Heroes. Riders on this 4D wing coaster from S&S – Sansei will experience a sensory overload as they flip head-over-heels at least six times along a weightless, tumbling journey with unexpected drops and vertical free-falls. 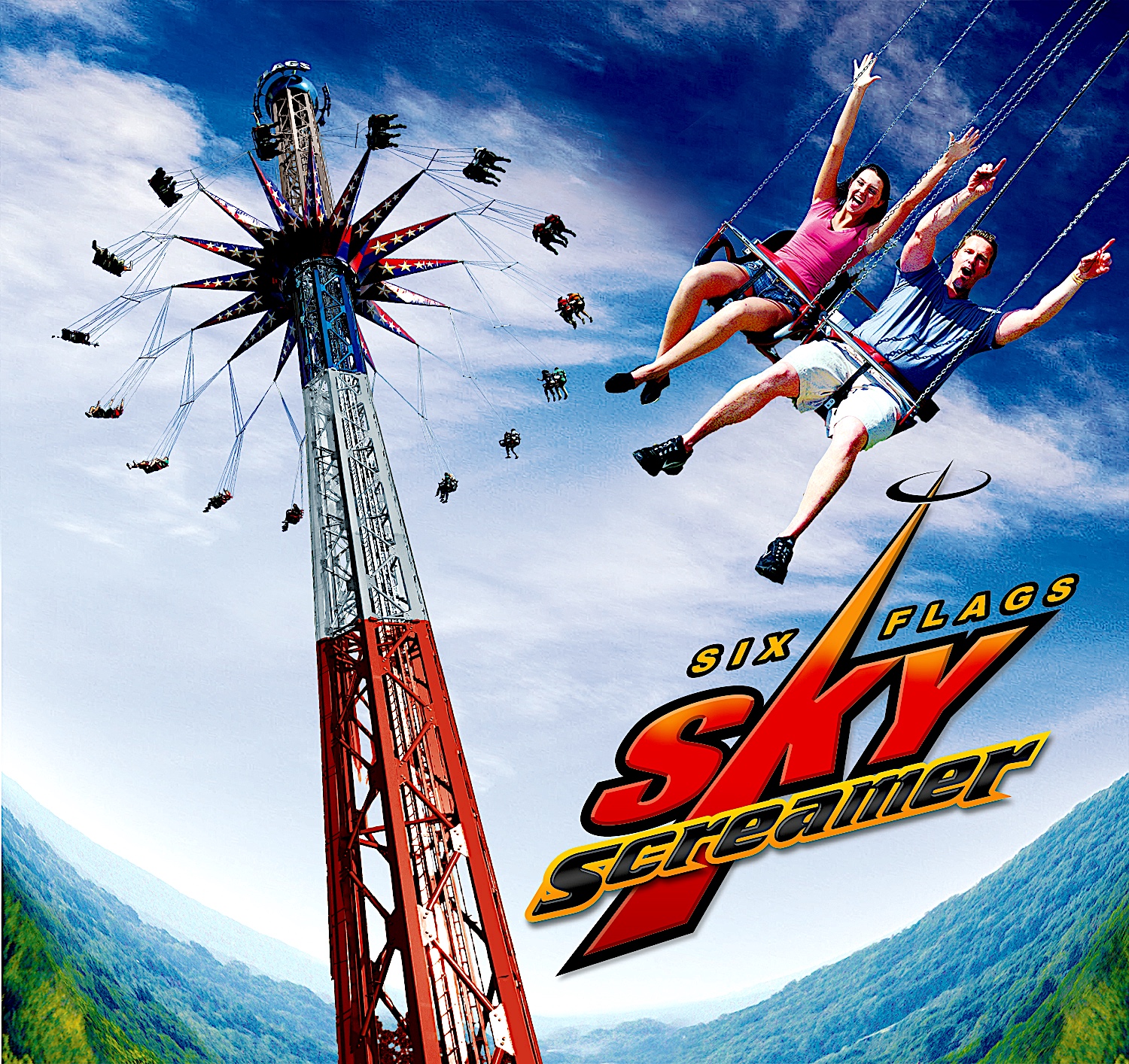 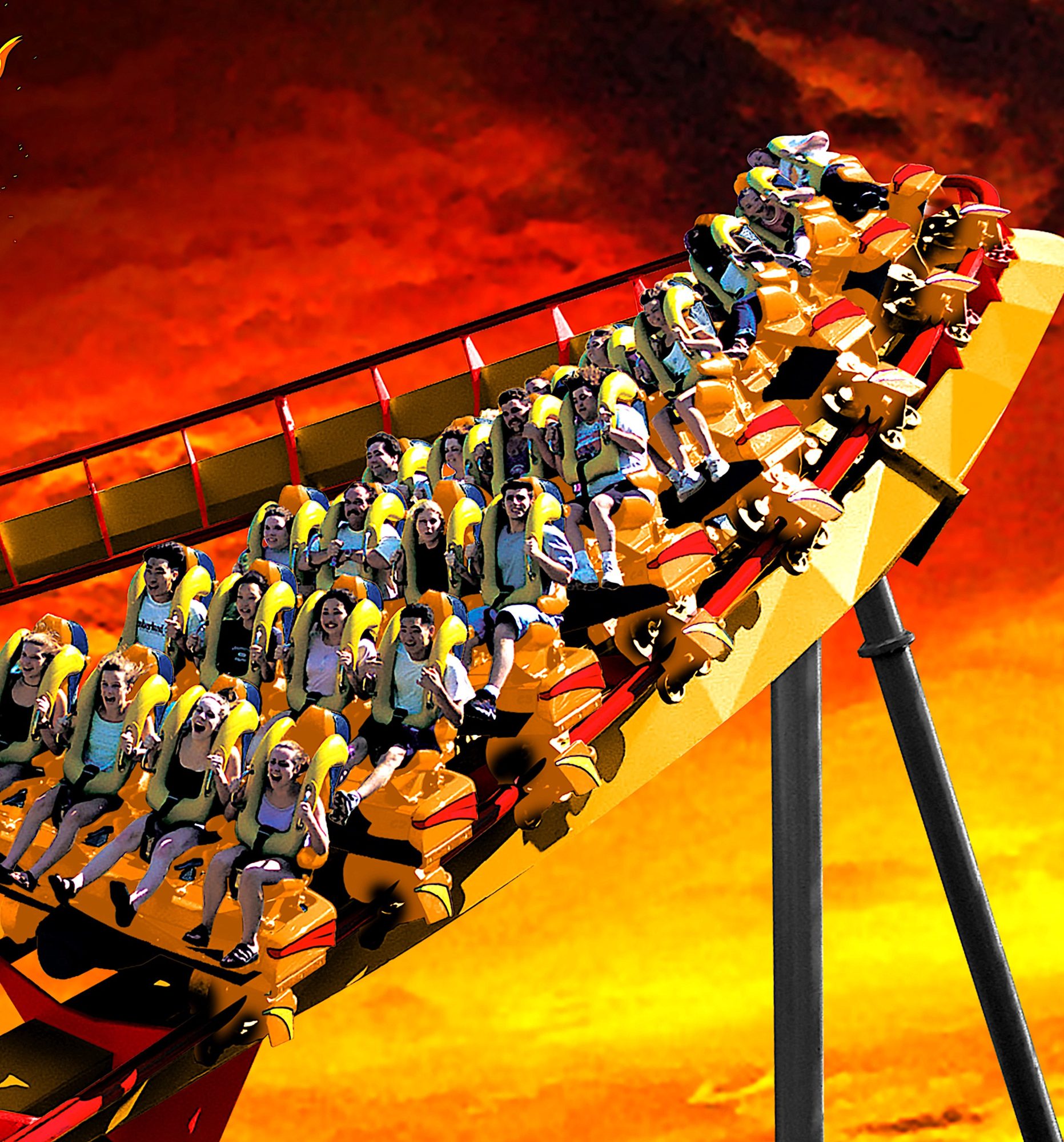 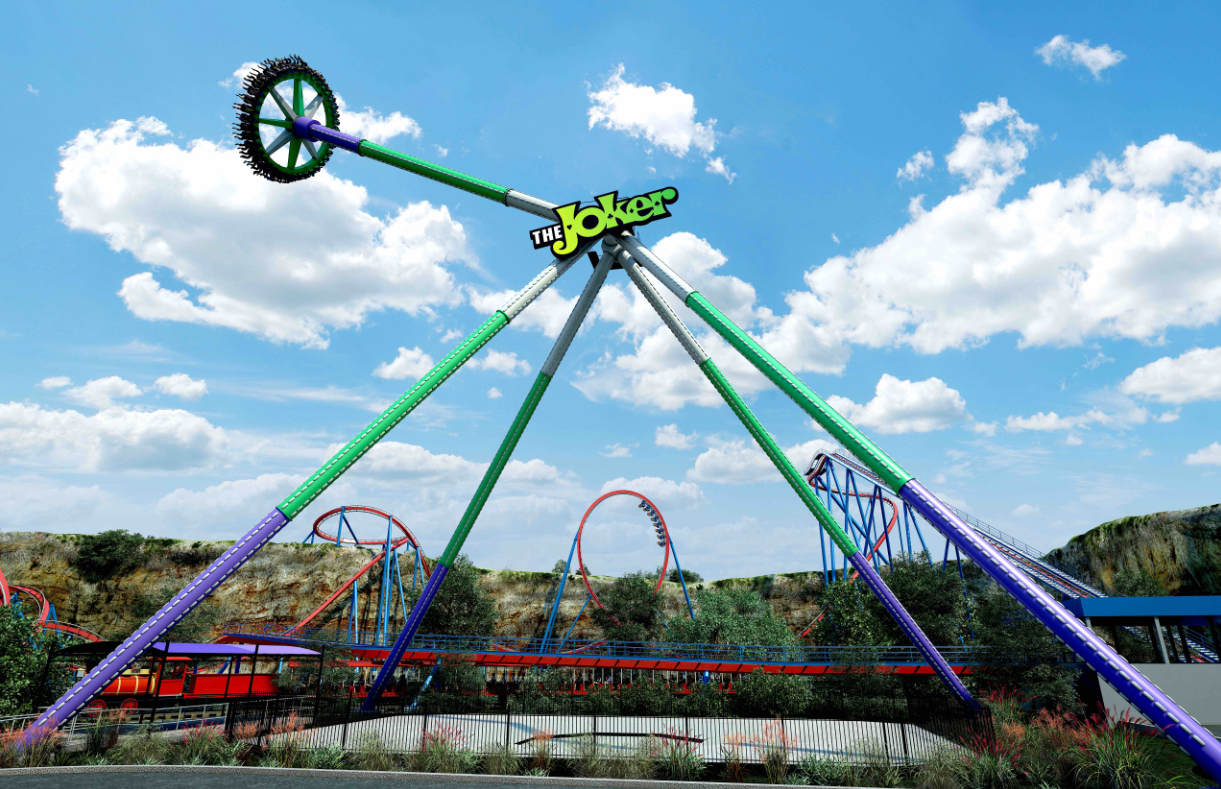 Six Flags Fiesta Texas, San Antonio, Texas will debut the tallest and fastest spinning pendulum ride in the world. Named after the world’s most iconic Super Villain, The Joker Wild Card delivers a unique brand of chaotic, dizzying fun for extreme thrill-seekers. Towering a record-breaking 17-stories tall, this Zamperla Giant Discovery will reach speeds up to 80 mph as it whips back and forth, and higher and higher, to give riders a spectacular view of the world below them. The Joker Wild Card will become the centrepiece of a newly themed DC Universe area. The park is also announcing year-round operation, adding winter weekends and holidays to its regular operating season.

Six Flags Mexico, Mexico City, is announcing fun for the entire family with the arrival of DC Super Friends and Bugs Bunny Boomtown. These colorful, imaginative new sections will feature 14 rides and attractions, including six brand-new themed attractions. These kid-friendly zones are destined to become the region’s most popular family destination spot and the perfect launching pad for thrill-seekers-in-training.

Mexico’s Six Flags Hurricane Harbor Oaxtepec will introduce a visually stunning and intense racing slide, King Cobra. From Polin, the slide’s unique configuration enables two tubes to race through a circular path with dynamic twists, turns and surprises, snaking through both enclosed and open sections of the slide. Riders will race until the heart-pounding finish, when they appear to disappear inside the massive mouth of the cobra. 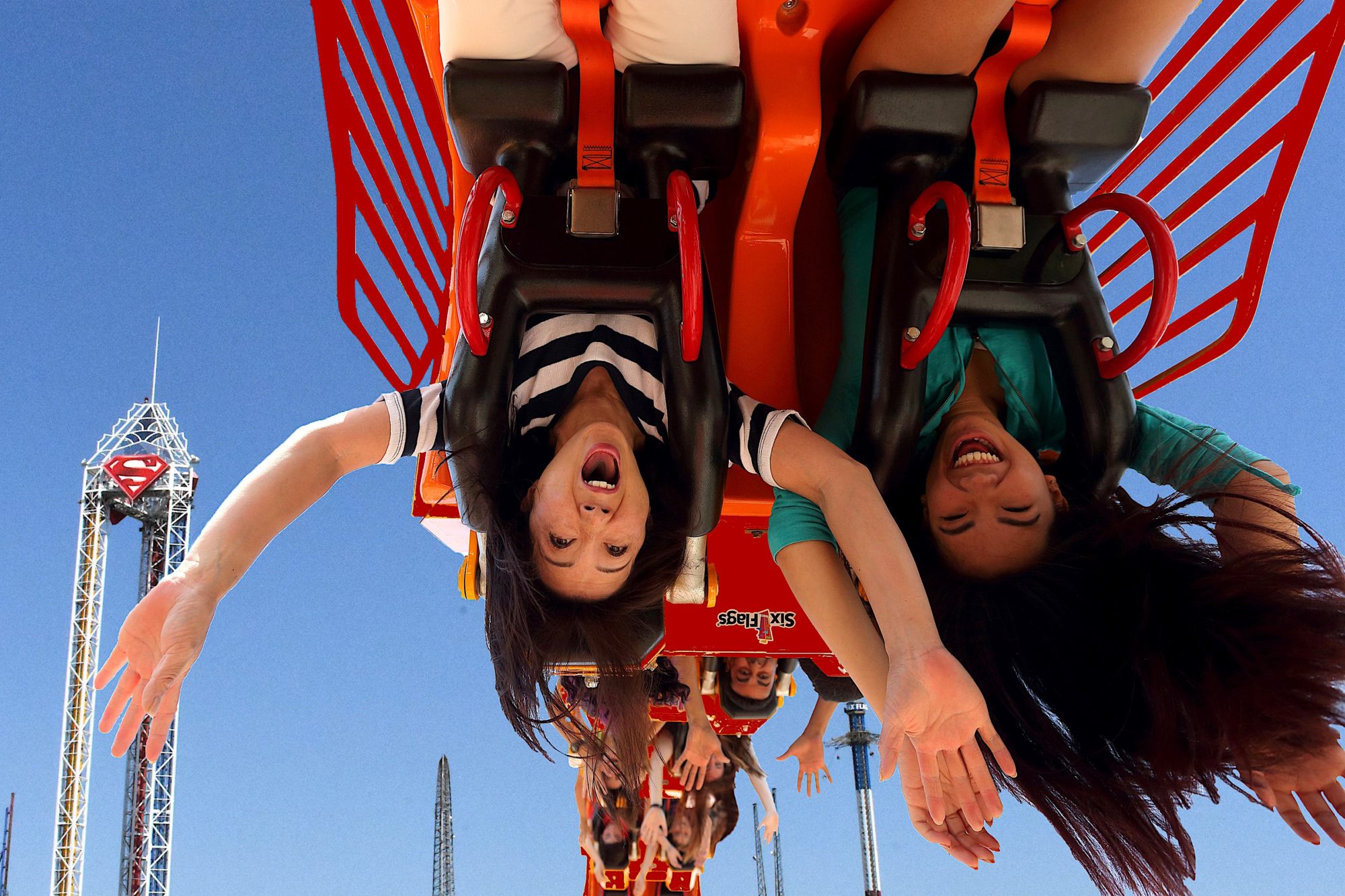 Six Flags Over Texas in Arlington will welcome the world’s largest loop ride, Lone Star Revolution. From Larson International and towering at 100 feet in the air, this exhilarating, record-breaking new ride takes riders forward and backward on a gigantic loop before suspending them upside down for extended hang-time. Thrill-seekers will travel in unique “face-off” seating positions and swing through a long series of 360º revolutions before reeling downward in the opposite direction. Lone Star Revolution is a Texas-sized loop ride with Texas-sized thrills.

Six Flags New England, Agawam, Massachusetts, will debut the hi-tech Cyborg attraction, inspired by the DC Super Hero. A Chance Rides’ Free Style, the Cyborg attraction is an extreme new dark ride experience. Cyborg invites guests to S.T.A.R. Labs to witness a new technological device when the sentient cybernetic system called The Grid hacks into the mainframe and takes control of the entire lab. Riders find themselves caught up in the battle, spinning and whirling mercilessly through the air, while Cyborg wrestles to regain control of the enormous machine. This exciting, new attraction offers 360º of immersive fun.

Six Flags Great Escape Resort, Queensbury, New York. will rebrand its outdoor waterpark as Hurricane Harbor for the 2019 season, offering guests a bigger, better and wetter experience. The park will undergo a major expansion with more to see and do than ever before, including two brand-new, family attractions: Bucket Blasters, a Zamperla Watermania where riders will spin around in barrels for a good old-fashioned water gun battle, and Shipwreck Cove, a fun activity pool with interactive water sprays, geysers, and fountains for hours of water play entertainment that is being done by Wizard Works Design Group. 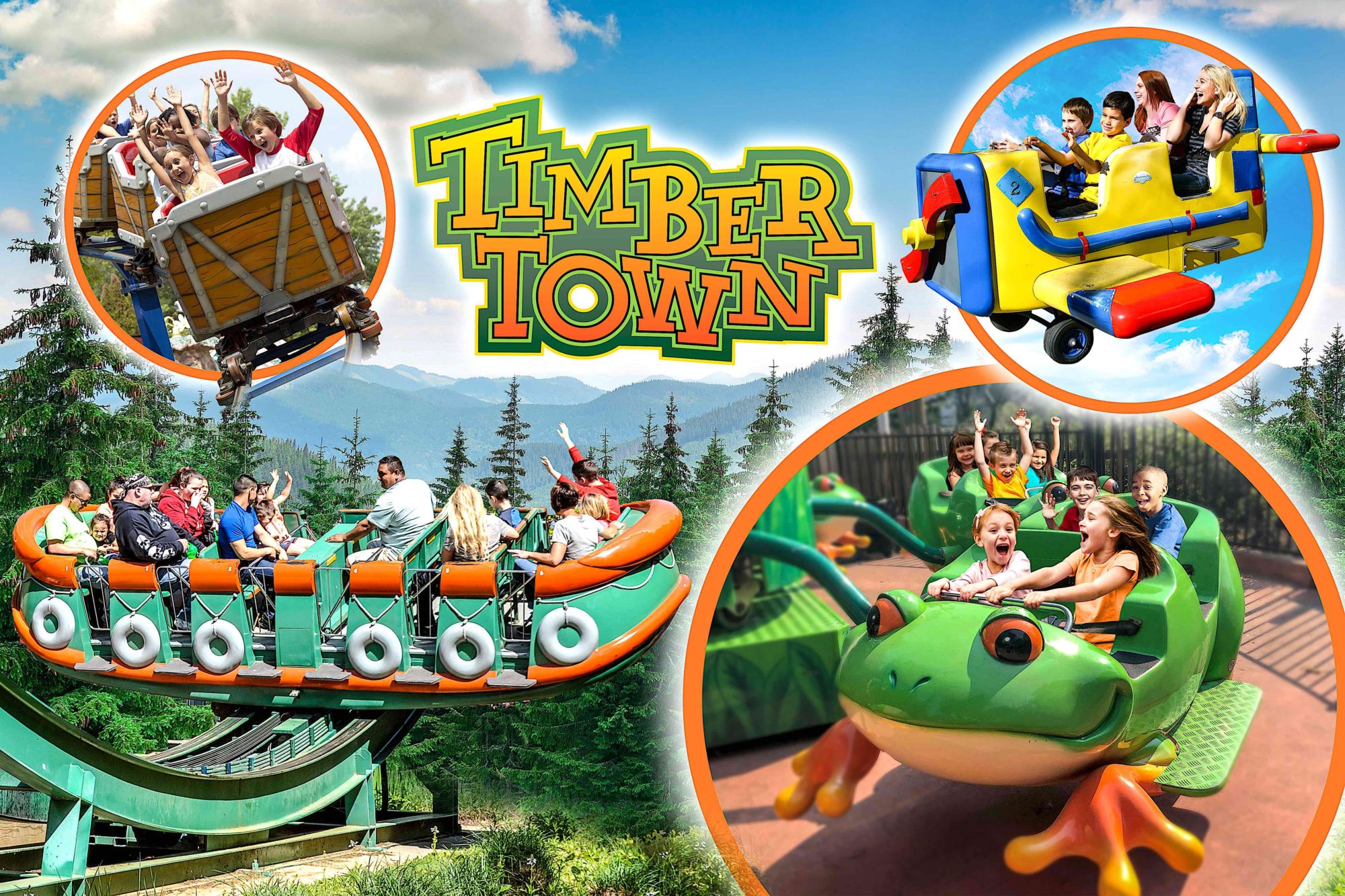 Frontier City in Oklahoma City will introduce an interactive new kids’ area that will be home to adorable new characters. The all-new Timber Town will feature four new, innovative attractions by Zamperla designed especially for the young thrill-seekers, plus enchanting new theming and fresh, re-imagined updates of the original children’s rides. Lovable characters like Bucky the Beaver, Hootie the Owl, and Bubba the Bear will be on hand for lots of pictures with young guests. 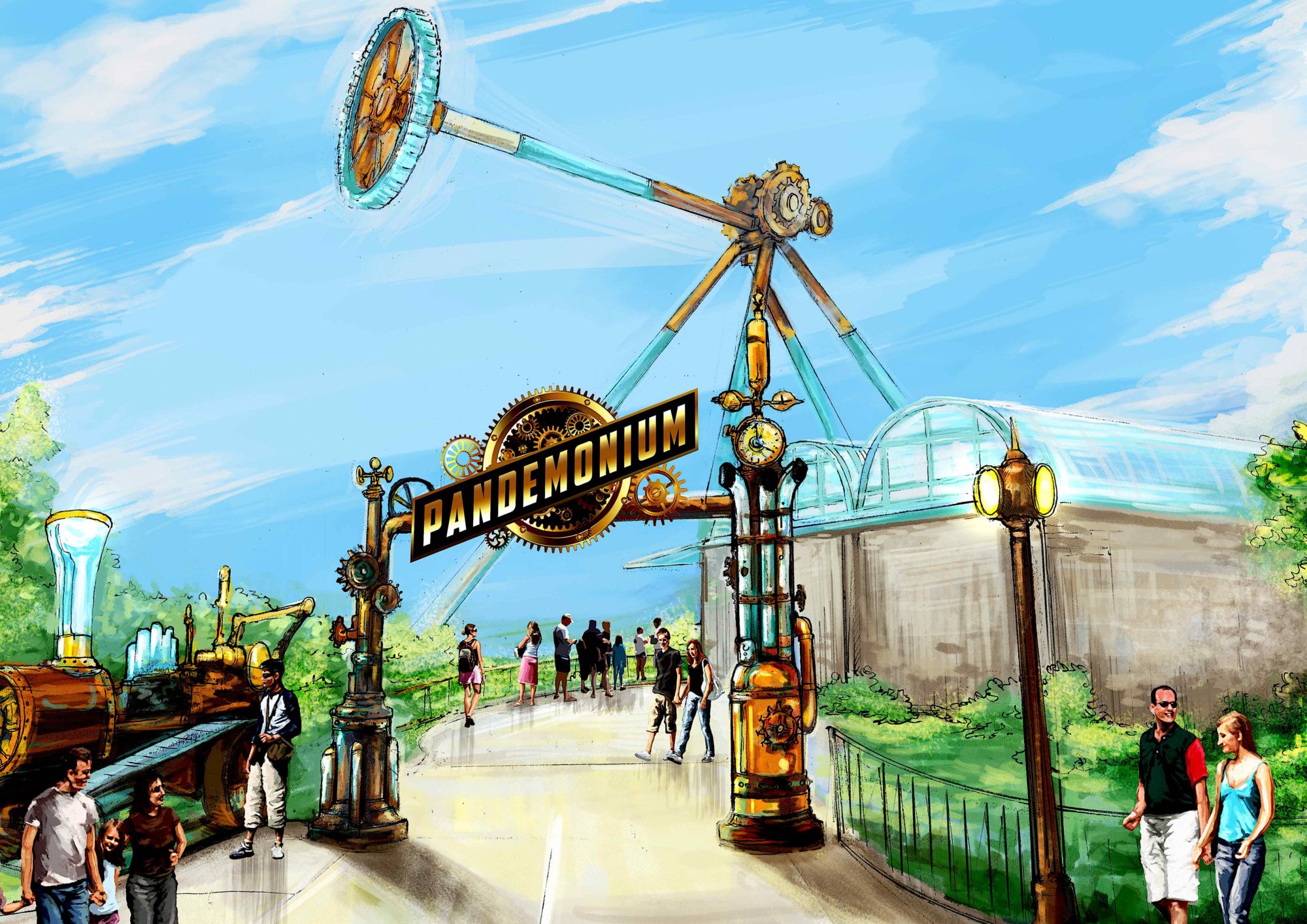 Six Flags Over Georgia, Austell, Georgia, will launch an exciting, new high-flying attraction, Pandemonium, the tallest swinging pendulum ride in the Southeast. Swirling through the clouds at an astonishing 15 stories, this Zamperla Giant Discovery will reach speeds up to 70 mph (113 kph), as it whips back and forth, higher and higher, giving guests an exhilarating ride experience as they soar high above the Atlanta city skyline. Pandemonium will be the centerpiece of the park’s new ScreamPunk themed area, featuring revamped food locations and shopping experiences. ScreamPunk is a special Six Flags twist on the popular Steampunk subgenre.

Six Flags St. Louis, Eureka, Missouri, will take guests on an adrenaline-charged flight on the new Supergirl attraction as they soar nearly seven stories high in open-air vehicles. Drawing on DC Super Hero Supergirl’s powers of stamina and strength, thrill-seekers spin and tilt while suspended from the massive, whirling wheel, an Endeavour by Zamperla. The ride is raised into the air by a giant arm as riders launch into a high-speed spin, with feet dangling as they spin round and round…higher and higher.

And, just in time for the holiday season, Six Flags Great America and Frontier City will join eleven other Six Flags properties ringing in the holidays with Holiday in the Park. This popular, time-honored Six Flags tradition offers a winter wonderland of all the beloved sights and sounds of the season. Holiday in the Park features festive holiday-themed shows and delicious seasonal treats, along with select rides and attractions, set against the backdrop of millions of twinkling lights.

The Year of Pixar