The base for the week’s events will be the Hard Rock Hotel at Resorts World Sentosa (RWS), the “integrated resort” that opened last year on Sentosa island, featuring a casino and Universal Studios Singapore theme park. More than 4,000 industry professionals are expected, where they will be able to see around 200 trade show exhibits, sit in on over 10 education sessions and network at a variety of social events and tours to local attractions

The 2011 AAE programme begins on Tuesday June 21 with a day-long IAAPA Safety Institute, promising an overview of current standards and regulations within the industry. Presenters will include Jim Seay from Premier Rides and ASTM, Disney’s Greg Hale and Kevin Cheong of the Association of Singapore Attractions.

The trade show then kicks off on Wednesday morning with a 9.30am Opening Ceremony. During the day, three seminars will be held including a session on Employee Engagement with Universal Studios Singapore’s John Hallenbeck, Reducing Your Attraction’s Carbon Footprint with speakers from Carbon Care Asia and Ocean Park in Hong Kong, and Indoor Entertainment Centres by Tim Newman-Morris from Lollipop’s Playland in Australia.

Straight after the show, at 5.30pm, an Opening Night Event will be held at Universal Studios Singapore. After the reception, guests will receive a Universal Express Pass to explore the park until closing. Tickets are US$90 for IAAPA members. This will be followed by the Young Professionals Reception at_Hotel Michael, usually a popular hangout for “thirsty” trade show attendees.

On Thursday morning, a Leadership Breakfast will address the topic of Sustaining and Growing the Attractions Industry with a panel including Tom Mehrmann from Ocean Park and Darrell Metzger, now director of Themed Attractions and Resorts in Malaysia. The session will be chaired by IAAPA’s third vice-chair, Mario Mamon from Enchanted Kingdom in the Philippines, and followed by the presentation of the Asian Attractions Awards. Additional education sessions on Thursday include Reinventing Wildlife Reserves Singapore with speaker Fanny Lai and Marketing Strategies Everyone Can Use with Paul Pei from Ocean Park and Wildlife Reserves Singapore’s Isabel Cheng.

An afternoon behind-the scenes tour of Singapore Zoo will be followed in the evening by a Singapore Zoo Networking Event & Night Safari, tickets from US$100.

A second Leadership Breakfast is scheduled for Friday morning Sentosa Leisure Group’s Mike Barclay addressing The Future and Current Impact of Integrated Resorts. Further discussion on the same theme will feature in a discussion entitled Integrated Resorts: From Theory To Making It Happen. Around lunchtime, representatives from industry trade associations across Asia will take part in a National Associations Roundtable Discussion. The final AAE education session for 2011 will tackle Risk Profiling and how to conduct a risk assessment, with contributions from Cameron Hay of MYR Consulting in Australia and Ocean Park’s Matthias Li.

The trade show then comes to a close at 3pm on Friday, after which a Resorts World Sentosa Behind-the-Scenes Tour is scheduled, including an intimate look at Universal Studios Singapore, WaterWorld aquarium, Maritime Xperiential Museum and the resort’s hotels. Tickets are US$55/60.

As well as the facilities at RWS, other Singapore attractions include the Singapore Flyer observation wheel and the Marina Bay Sands hotel/casino including its new nightly Wonder Full multimedia spectacular and “Sky Park.” Visitors to Singapore can also enjoy the city’s amazing culture, museums, botanical gardens, luxurious spa facilities, shopping and nightlife. However, due to several other major events taking place in Singapore at the same time, IAAPA is recommending travellers book their hotel rooms early.

Asian Attractions Expo 2011 takes place from June 21 to 24. To register, for fees and more information visit www.iaapa.org/expos/asian AAE 2012 has been confirmed for Hong Kong 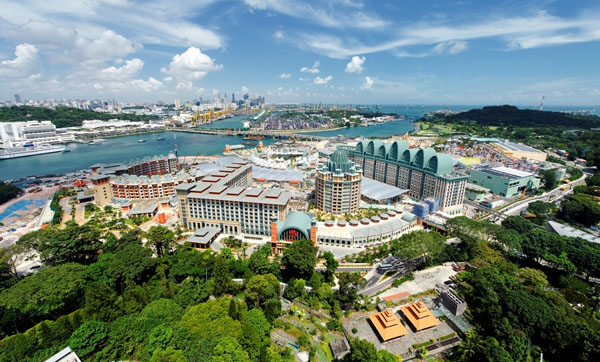