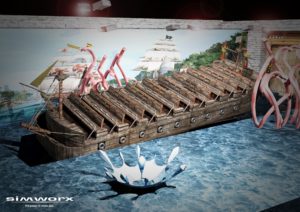 UK-based dynamic media attractions specialist Simworx has announced that it is to provide a brand new version of its Immersive Tunnel attraction for the first phase of the new Amikoo Resort Destination Theme Park (Amikoo), located on the Riviera Maya between Cancun and Playa del Carmen in Mexico.

The concept behind Amikoo is based on Maya cosmogony, and the theme includes the creation of over 40 characters as IP for the exclusive and dedicated use of the brand, franchise and attractions.

Piratas de Bacalar will be based on the history of pirates in Mexico and will provide an adventure in the Caribbean Sea defending the San Felipe Bacalar Fort, along with a grand exhibition about the events involving piracy in Mexico. The attraction will be a new version of Simworx’s Immersive Tunnel which will utilise a single, 60-seat, 3DOF motion base (as opposed to the 30-seat motion bases found in other versions of the ride) themed as a pirate galleon.

A real water basin around the galleon will help to simulate a journey on the sea while special effects such as wind and water spray will add further to the experience.

“Simworx will be the main supplier for the attraction but we have brought on Jora Vision for the theming elements,” explained Simworx sales director Edward Pawley. “It will be a standalone attraction within the resort and will be a 50 minute experience in total, with a series of pre-shows leading up to the main ride element.”

The first phase of the Amikoo project is scheduled for the end of 2018 through March 2019.