Media attractions specialist Simworx has partnered with water ride specialist Interlink to create a brand new attraction concept which will see a motion base and immersive screens added to a flume ride for a world first experience.

Using 16-seater boats and a conveyor loading system on the attraction, riders will leave the loading/unloading station and sail through a dinosaur themed area before entering an immersive tunnel section where their boat will stop and huge immersive screens on either side of them will come to life to provide a dinosaur adventure element. Movement of the boats in synch with the action on the film/visuals will also be incorporated to add further to the experience.

Having escaped the dinosaurs, the ride will then continue through another dinosaur themed section before entering a 12m vertical lift featuring further theming and various special effects. On exiting from the top of the lift, riders will plunge into the final splash pool before heading back along another section of the ride to the station. Large screens accommodating 3D, 4K projection will be used in combination with an audio system to place riders at the centre of the action.

Interlink commercial director John Davies said: “The Immersive Superflume will take the ride to another level and will add an exciting and entertaining new element to this type of attraction. We are looking forward to working with Simworx on the project and to developing what I’m certain will be a very popular ride with guests to the park.” 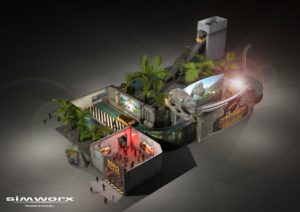 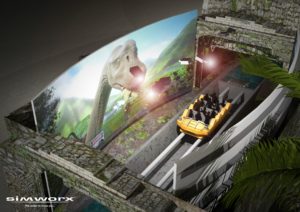 The first example of the new attraction is due to open in December 2019 at a new shopping mall being developed by Trans Studio in Cibuber, outside Jakarta, Indonesia.