Showzam! brightens up winter in Blackpool

Thanks to its annual illuminations, the British seaside resort of Blackpool enjoys a season longer than most – right through until the beginning of November. But now the season starts earlier than ever too, and a relatively new event is providing people with another reason to visit over the winter.

A 10-day celebration of circus, magic and variety, Showzam! takes place at various venues around the town during the “half-term” school holidays each February. This year a record 20,000 visitors descending on the festival hub, Showzam! Central at the Winter Gardens (pictured below) to see an intriguing selection of fairground side shows, live acts and curiosites. Meanwhile, at the same venue, AtmosFEAR Entertainment staged a two-day scare attraction called CarnEvil of Horrors.

Elsewhere in the town there was a full programme of fringe shows, street theatre and events including Variety by the Sea, Circus Bollywood and a Burlesque-style Carnival Ball at Blackpool Tower. Behind-the-scenes tours were offered at the the Tower, Pleasure Beach and Grand Theatre, while Carnesky’s Ghost Train provided a chilling twist to half-term.

Now in its fifth year, Showzam! grew out of a 2007 project called Admission All Classes, which looked to revive and celebrate Blackpool’s proud tradition of populist entertainment. The event is curated by Professor Vanessa Toulmin from the National Fairground Archive at the University of Sheffield. Research collected at this year’s event suggests Showzam! is becoming a nationally recognised festival, also attracting overseas visitors from as far a field as the USA. 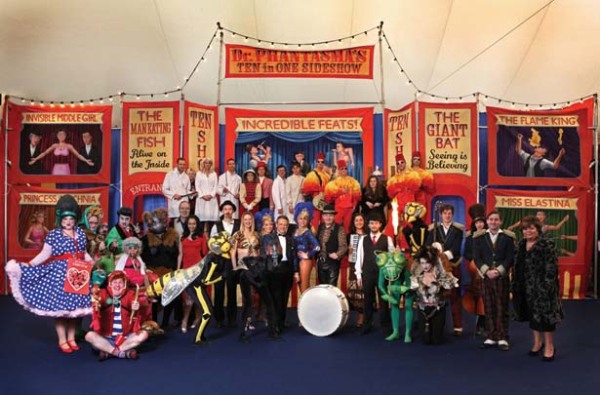