Cedar Point’s new Shoot the Rapids is a flume ride on steroids. The newest ride at the Sandusky, Ohio, amusement park and resort opened earlier this summer, and has been drenching guests ever since.

Shoot the Rapids is a wild river adventure for the whole family. Built at a cost of $10.5 million (€8.3m), it is the most expensive water ride ever at Cedar Point. Supplied by IntaRide, the North American affiliate of Intamin, the boats appear seaworthy, but guests quickly learn otherwise.

“Every great amusement park should have a flume ride,” contends Cedar Point vice-president and general manager, John Hildebrandt. “Cedar Point introduced its first flume ride, the Mill Race, in 1965. In 1969 we added Shoot the Rapids in Frontier Town, which made way for a new flume, Whitewater Landing, in 1981. When we took down Whitewater Landing to build Maverick [an Intamin coaster] in 2006 we knew we would be adding another flume at some point. It turned out 2010 was the year.”

“Water rides have always been very popular at Cedar Point,” he continues. “We had great seasons when we introduced Thunder Canyon, our rapids ride, in 1986, and Snake River Falls, our splash ride, in 1993. But Shoot the Rapids is different; it has two lifts. It crosses over a lagoon. The first lift is the higher lift, which is a bit unusual, but it works.”

The new attraction provides an impressive hourly capacity for 1,200 guests. Up to 10 passengers can board each of the 10 fibreglass boats, where they are restrained with over-the-head lap bars with handgrips. The boats navigate through meandering rivers along the Frontier Trail and Millennium Island. The real thrill begins when the boats climb the first of two lift hills and shoot through whitewater rapids and rockwork.

The first hill is 85-feet-tall (26-metres), one of the tallest water ride hills in the world, while the second crests 49ft (15-metres) above the ground. At the bottom of the first 45-degree hill, boats are travelling nearly 50 mph (80kmh). Riders will get very wet as they encounter numerous water features and special effects throughout the three-minute trip. Guests who want to stay dry can launch bursts of water at unsuspecting riders from an observation deck.

“Our guests really do enjoy the ride,” smiles Hildebrandt. “I can say that with authority because I’ve already logged a lot of hours watching people ride and talking to them as they exit. The ride experience is terrific. And you do get wet. I was one of the first riders. Front seat, of course. I think the best part of the ride is dropping down the first hill and that first big splash.” 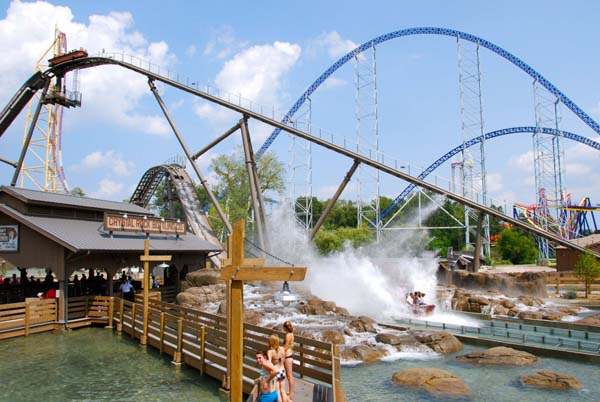 Shoot the Rapids uses more than 730,000 gallons (2.7 million litres) of water. The 2,100ft (640-metres) journey carries riders through a dark mist-filled tunnel and in between canyon walls with spraying water before sending the boats skim across churning rapids at the bottom of the second hill.

“We certainly expect that Shoot the Rapids will increase attendance,” believes Hildebrandt. “It’s a major investment. It will increase traffic along Frontier Trail and in the back of the park. It gives us three great, but different water ride experiences: Shoot the Rapids, a traditional flume; Thunder Canyon, a river raft ride, and Snake River Falls, a splash ride. It’s a family ride with a 48” height requirement – 46 inches with a parent – so this is a ride parents and children will ride together. For us, that was a very important consideration.”

Building Shoot the Rapids was not easy. “It was a challenge to build because of its location,” Hildebrandt explains. “The construction site was extremely tight. We had to drain a lagoon, build a bridge to an island, then take out the bridge and re-fill the lagoon. Despite these challenges, the ride looks beautiful on the site. The Cedar Point & Lake Erie Railroad passes in front of the ride, and our boat ride, Paddlewheel Excursions, passes directly underneath the first hill. In the background are the sweeping curves of Millennium Force. The ride makes a great first impression.”

IntaRide/Intamin is already responsible got some of Cedar Point’s most popular attractions, including Millennium Force, Wicked Twister, Top Thrill Dragster and Maverick. “We are very familiar with their capabilities and work style,” offers Hildebrandt, “which helped as we worked through the commissioning process to get the ride open.”

With the opening of Shoot the Rapids, the park now boasts has 75 rides, including 17 rollercoasters, more than any park in the world. In addition to the new water ride, Cedar Point has introduced five new shows to its entertainment package this season, ranging from country classics to a real-life version of MTV’s Rock Band video game. 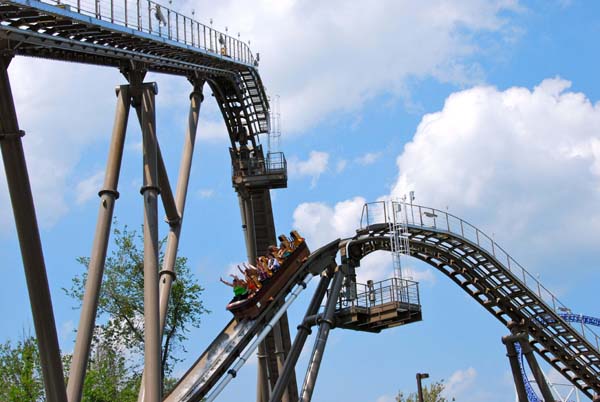