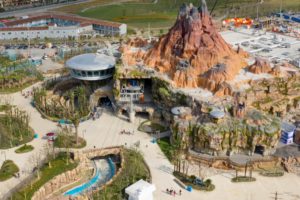 The Legacy Entertainment-designed Shanghai Haichang Ocean Park has just been named “Best Theme Park” at the 2019 China Cultural & Tourism Development Conference (CAAPA), which was recently held in Beijing. The park won a “Ferris” Award from the CAAPA for “Best Theme Park” for its scale, theming, quality, and high construction standards.

Since its opening on November 16, 2018, Shanghai Haichang Ocean Park has been dedicated to presenting flagship tourism products with rich content, novel display forms, high technology content, experience and interaction, and wonderful performances. The park’s theme is “Love as a Happy Ocean Journey.”

Regarding the honour, Taylor Jeffs, president and chief creative officer of Legacy Entertainment, said, “Working with the team at Haichang, we all shared the goal of elevating the standard of what a domestic Chinese theme park could be – and this award is a testament to our partner’s commitment to that vision. We hope this recognition will inspire others to reach for the same standard of animal care and guest experience that Haichang has achieved in Shanghai.”

According to Jeffs, some 330 million people live within a three hour drive of Shanghai Haichang Ocean Park – a venue which represents the first marine attraction in the region. Normally, the major aquariums and sea life attractions in China are located in the south – and while the north-east of the country is the area of greatest population density, it has, up until now, lacked a world-class marine attraction. Shanghai Haichang Ocean Park represents the first time that hundreds of millions of people are now able to see whale sharks, orcas, beluga whales, and many other species which are presented there.

Legacy started working on Shanghai Haichang Ocean Park in 2013 on behalf of their client Haichang, which operates aquariums throughout China. “We saw what they did and were very impressed, so we really wanted to work with them. What we didn’t know at the time we first began our relationship was that they’d also already hired three other firms to design different concepts for Haichang Ocean Park,” Jeffs said.

The project had a lot of attention on it from the start, and Haichang wanted to make sure they got it right. According to Jeffs, plans for the park involved one of the largest private land acquisitions for 20 years in China. The land was in a prime location, around a 30-minute drive from the Shanghai Disney Resort, and the Chinese government was intent on building the region into a tourism centre. “Unbeknown to us, there were originally three different concepts,” Jeffs continued. “So we presented ours, and, luckily, the government chose it. We then spent the next year-and-a-half or so designing the park, finishing the concept and schematic design in 2015.”

“When we were working on it, the original attendance estimate was going to be 3.2 million people per year,” Jeffs continues. “They have since raised that estimate up to 6 million people per year, because Shanghai Disneyland is doing so well. And they are offering the general admission price at a 30% to 40% lower cost than entry into Shanghai Disneyland.”

“In addition to the amazing sea animals displayed there, the park also has a great Intamin launch roller coaster aimed at families, and the world’s longest rapids ride, which is really neat. There’s a train ride, there is an aerial skyway gondola ride, and there a variety of other family rides as well. So overall, Shanghai Haichang Ocean Park is much more than just a sea life park – it’s a highly dynamic venue offering multiple interactive adventures and experiences,” Jeffs concludes.