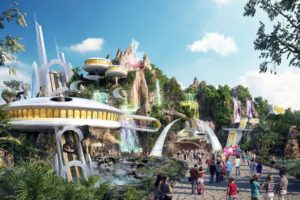 Shanghai Haichang Ocean Park will open on September 28 announced park chairman, Wang Wei. The announcement was made during an event at Shanghai’s Intercontinental Hotel, where additional park details were also revealed.

Positioned less than 30 minutes from Shanghai Disneyland by car, the 73-acre theme park is expected to draw over 3m visitors during its first year of operation.

“Working alongside our friends at Haichang, our goal was to create the world’s greatest marine life park,” said Mardy Ma, managing director of china for Legacy GGE. “Parks like Sea World evolve in small pieces over many years, whereas we had the luxury of designing the entire park from the ground up. This allowed us to seamlessly integrate the latest design trends and animal care technologies.”

In addition to six pavilions and three theatres, the new park will also be home to a number of non-sea life related attractions, including an Intamin launched roller coaster, and the world’s longest Spinning Rapids Ride, provided by WhiteWater.

The project is the latest in a long line of large-scale marine life destinations by Legacy GGE, beginning with the Georgia Aquarium in 2005.