Set for an official opening on 28 May, Seven Dwarfs Mine Train is the crowning jewel of Walt Disney World’s New Fantasyland expansion at the Magic Kingdom in Florida.

That familiar tune from the 1937 Disney animated classic Snow White and the Seven Dwarfs resonates in your head as you depart the Seven Dwarfs Mine Train. The attraction immerses Magic Kingdom guests in the lovable world of Sleepy, Doc, Grumpy, Bashful, Sneezy, Happy and Dopey, sending passengers on a playful musical adventure into the mine “where a million diamonds shine”. 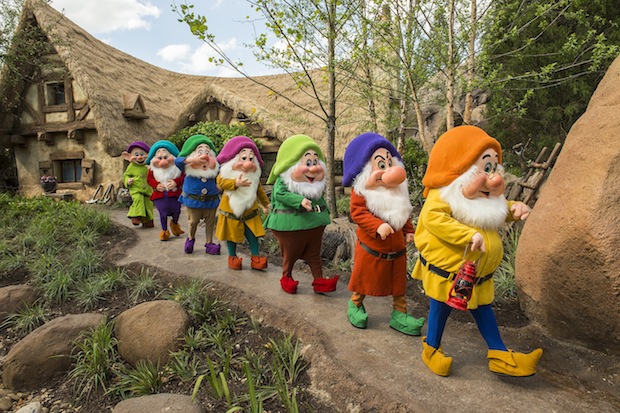 “Seven Dwarfs Mine Train is both literally and figuratively the centrepiece of New Fantasyland, so we knew it had to be something special,” says Walt Disney Parks and Resorts chairman Tom Staggs. “The attraction appeals to everyone in the family and provides just the right blend of heart, humour, and thrill while keeping with the charm of this special land.”

The attraction is both a rollercoaster and a dark ride. It features an innovative new ride system using six 20-passenger trains of five cars each. The system allows each of the four-passenger cars to pivot back and forth during the twists, turns, hills and drops of the ride, including drops of 41 and 31 feet (12.5 and 9.4m). Guests reach a top speed of 34mph (55kmh). Along 2,000ft (610m) of track, passengers pass through magical mountain scenery studded with red poppies and live oak, cedar and birch trees. At the midpoint of the attraction, the train slows and enters the dark ride portion, a mine aglow with gems and scenes with animatronic dwarfs and frolicking forest creatures. Music from the film accompanies the journey. At ride’s end, the cottage of the dwarfs, replicated from the animated movie to exacting detail by Walt Disney Imagineers, comes into view with a dancing Snow White visible through a window. A final surprise finds the Evil Queen, lurking outside the cottage disguised as an old hag, with a poisoned apple in hand. 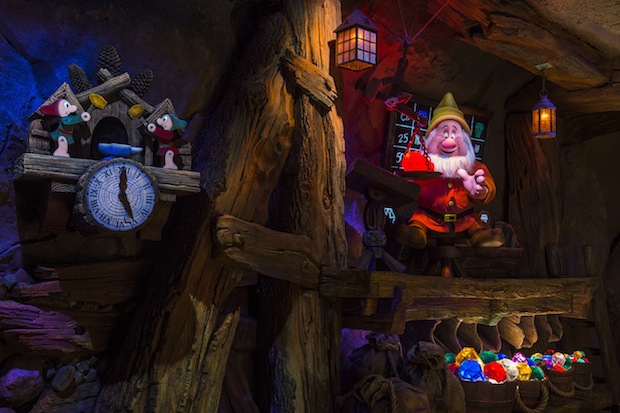 Staggs was joined at the ride dedication ceremony on 2 May by Snow White and all seven dwarfs who proudly brought their freshly-mined gems. “It’s my honour to dedicate the Seven Dwarfs Mine Train, which we think will become an instant classic in New Fantasyland,” said Staggs at the ceremony.

Vekoma Rides Manufacturing supplied the ride system. “We have a great family rollercoaster,” reports Walt Disney Imagineering (WDI) project manager Chad Stachnik, “one the whole family can enjoy. Vekoma was asked to recreate the mine train with swinging buckets, and they were a great partner in this project. We continue to do great coasters with them. We partner with many vendors, and this was something they could do well.”

Stachnik was also rightly proud of the ride’s audio-animatronics. “In the animatronics we take the animation from the movie and bring it to the attraction and do it cleanly. This is the best we’ve done to transfer the animation you see in the movies into the parks.” 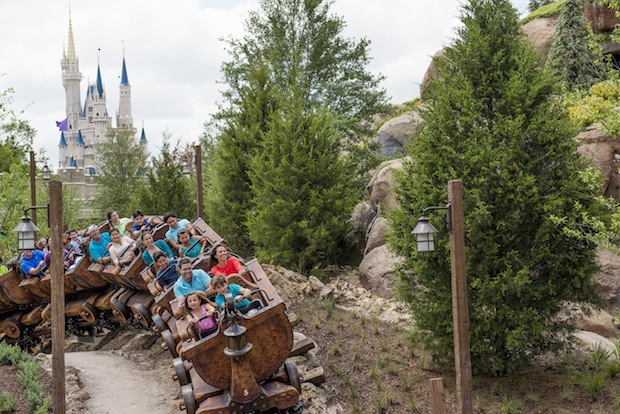 The Seven Dwarfs story begins as guests cross a stone bridge and walk, towards the attraction entrance, through a forest with the dwarfs’ cottage in the distance.

“We start the story in the queue line,” Stachnik confirms, “early on in the forest before entering the mine. We have three interactive digital [game] elements, a jewel washer, a jewel sorter, and barrels of jewels that project characters onto the ceiling as guests spin the barrels.”

Time spent in our queue line is used to immerse our guests in the story,” contends associate show producer Pam Rawlins. “You don’t even have to know the story. There are unbelievably lifelike dwarfs that are working and showing guests what they do – dig dig digging all day long.”

After passing through this interactive pre-show, guests proceed towards the mine train itself. Riders board the specially-designed mine cars and launch into their journey through the mine. The substantial-looking cars are designed to reflect similar vehicles that appear in the Seven Dwarfs film, as if handmade from wood and shaped by an axe by the dwarfs. 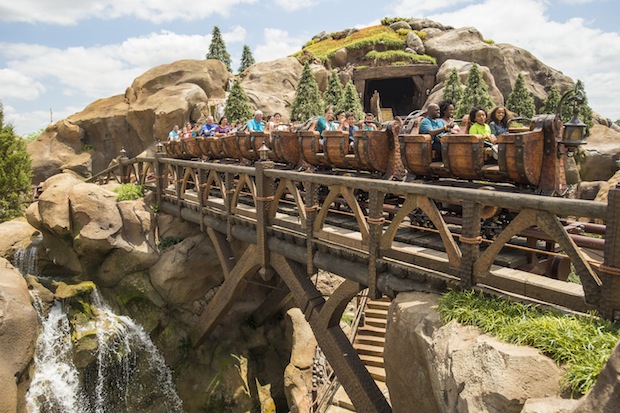 Departing the station, the train rolls through some curves begore climbing the first lift hill. Mining tools are scattered beside the tracks. Riders negotiate some mild twists and drops that cause the cars to swing before slowing to enter the mine.

Entering the mine is alone worth the price of admission. it’s a joyous visit, and the animatronic dwarfs working away in the mine must be seen to be believed. They are a combination of animatronics and projection with life-like precision for cartoon characters. The mine is well-lit and the songs from the original Disney film add to the experience.

Exiting the mine, the train climbs to the top of the second lift, where guests have a brief moment to enjoy views across New Fantasyland towards Belle’s cottage and the Beast’s Castle above Be Our Guest Restaurant, and beyond. Then, the track drops precipitously, passing under a trestle and looping around the mountain crossing over the same trestle. The vehicle picks up speed as it careens down the mountain, twisting and turning, with its cars swinging back and forth. At the foot of the mountain, the mine train loops back to cross a pool at the bottom of a waterfall. 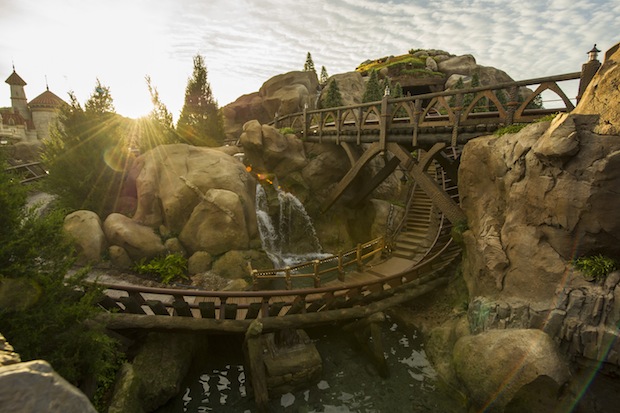 Time to tell the story

“Guests will enjoy this ride because of the new technology, the animatronics, the dwarfs; there’s something for everyone,” smiles Stachnik. “The ride is smooth, it slows down in the mine so people can see the animation and the dwarfs mining the jewels. There are a couple of thrills with two lifts and drops out the mine shaft, and there is time to tell the story. Guests will be singing along with several of the songs from the movie.”

“We collaborated with our feature animation people to make the animatronics even more lifelike,” Rawlins added. “The attraction has three unique elements: the ride vehicles, audio animatronics, and a full-scale replica of the cottage.”

For those who like to pay attention to the richness of Disney detail, WDI Imagineers added an item atop the mine train’s first lift hill. There’s a jib crane upon which two vultures are sitting. These birds first appeared in Snow White’s Scary Adventures, one of the Florida park’s original attractions that closed in May 2012. In the mine and elsewhere one can find shovels, picks and barrels, the dwarfs’ names carved into the wood, and even a carved wooden clock like that from the film. 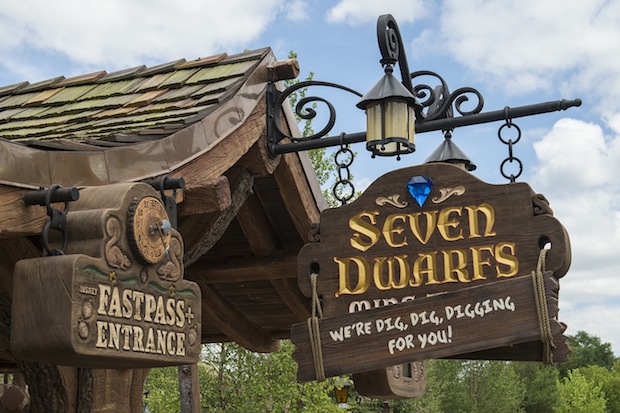 Representing the largest expansion in the history of the Magic Kingdom – the world’s busiest theme park ­– New Fantasyland features several other attractions, dining and retail opportunities. Located just beyond the existing Fantasyland, in the shadows of Cinderella Castle, a new train station links Fantasyland to other areas of the Magic Kingdom via the Walt Disney World Railroad.

Under the Sea – Journey of the Little Mermaid is a dark ride that takes guests on a journey with Ariel and her friends against a musical soundtrack taken from Disney’s animated </span>Little Mermaid movies. Then there’s the Barnstormer featuring the Great Goofini family rollercoaster, Casey Jr Splash ‘N’ Soak Station waterplay area and not one but two flying Dumbo rides at Storybook Circus. Opened last autumn/fall, Princess Fairytale Hall is the new home where Disney princesses greet their loyal subjects. Shopping is found at Bonjour! Village Gifts and Big Top Souvenirs, while food and drink is available from the Be Our Guest Restaurant and Gaston’s Tavern. The new expansion now doubles Fantasyland in size.

● To convince themselves the ride system would work, early on in the attraction’s development Disney Imagineers built a plywood box that could swing, mounted it in the back of a pickup truck, and drove it around the Walt Disney Imagineering parking lot in Glendale, California.

● The shadows of the dwarfs seen marching homeward along the track on the lift inside Seven Dwarfs Mine Train were rotoscoped from the scene in the original film where the dwarfs march across a log bridge, singing “…home from work we go.” Rotoscoping is a technique where the movements of a figure in original live or animated footage are copied, or traced, frame-by-frame.

● At the jewel washing station within the attraction’s pre-show, a melody from the classic film can be created by moving from spigot to spigot. There are 12 spigots, corresponding to the notes of the musical scale.

● In the original Snow White tale by the Brothers Grimm, the seven dwarfs were unnamed. When Walt Disney and his animators decided to name them to correspond with their character, scores of names were rejected including Wheezy, Jumpy, Baldy, Hickey, Sniffy, Stuffy, Burpy, Tubby, Shorty, Deafy and Dizzy.

● The original Fantasyland debuted when the Magic Kingdom opened in 1971.

● The total cost of the New Fantasyland expansion is $425 million.

● The Magic Kingdom is one of four theme parks at Walt Disney World in Lake Buena near Orlando, Florida, and attracts over 17 million guests a year.