Port Aventura in Salou, Spain, is one of the latest theme parks to open a Sesame Street-branded area aimed at young guests.

Open since the start of the season back in April, Sésamo Aventura represents the park’s sixth themed land. The 13,000 square metre area is packed with 11 individual attractions and represents a €15 million investment, the most ambitious expansion of the park since it debuted in 1995. To reach the new land, which is located next to Polynesia, guests can take advantage of a new station on Port Aventura’s in-park railway.

Theming was completed by artistic director Claudio Mazzoli and is very different from that found elsewhere in the park, although it does bear certain similarities to Fantasy Kingdom at Gardaland in Italy.

A focal point of the new area is the 12-metre-high El árbol mágico (Magic Tree), where guests can meet and greet their favourite Sesame Street characters, or climb inside for a elevated view of the park. Running through the new area is a plane-themed monorail called Coco Piloto by SBF/Visa, while opposite is Mariposas Saltarinas (Bouncing Butterflies), a custom-themed interactive Magic Bikes by Zamperla. Magic Fish is a Jetski water ride by Zierer, El Salto de Blas is a combination of two Heege towers, while La Granja de Elmo (Elmo’s Farm) is an SBF/Visa tractor ride with crazy animated cows, pigs and goats along the route, in addition to a lively soundtrack. 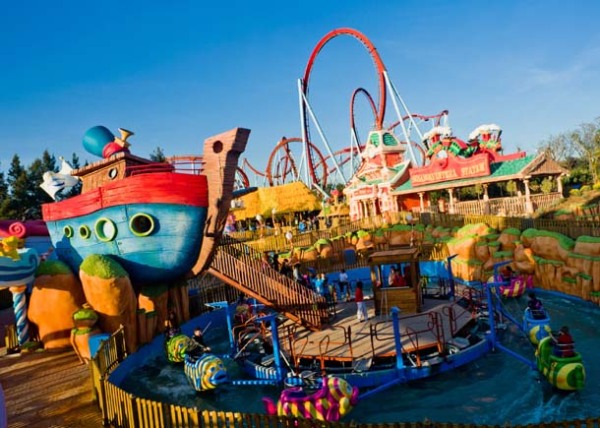