The world’s first Sesame Street dark ride launched on March 1 at Universal Studios Singapore. Bringing the world’s longest-running and most beloved children’s television programme to life, Sesame Street Spaghetti Space Chase features inside the New York-themed section of the park at Resorts World Sentosa, together with themed facades typical of the show.

The indoor experience takes families on an outer space adventure with Elmo and friends, featuring a zany plot coupled with signature Sesame Street comedy and music. Travelling through the attraction on four-seater suspended rocket-like ride vehicles, guests become fully immersed in the multiple scenes and special effects featuring many of their favourite Sesame Street friends – and a few new ones.

Kick-starting the story are the fresh characters Macaroni the Merciless and his partners-in-crime, Zester and Shredder. Created especially for this ride, these gluttonous super villains are on a quest to steal all the spaghetti and noodles on Earth. With the help of Super Elmo and Super Grover, passengers must try and stop them and return all the pasta to the planet’s children. We told you it was a zany story!

To herald the new attraction’s arrival, a Sesame Street Carnival was held at Universal Studios for the first three days of March. Characters from the show have featured at the Singapore park since last May, as part of a live show, meet-and-great opportunities and in retail opportunities including Big Bird’s Emporium.

“The launch of our Sesame Street shows at Universal Studios Singapore last year were a tremendous success,” notes Dennis Gilbert, senior vide-president of attractions at Resorts World Sentosa. “We look forward to continuing the Sesame Street experience with the launch of this new ride, packing in even more fun and excitement for the whole family.”

Completing the Sesame Street experience at Universal Studios Singapore, an all-new Sesame Street Character Breakfast is to be held this year during weekend and holiday periods at Loui’s NY Pizza Parlor. Guests taking advantage of the promotion, which costs S$44 (US$35) each for adults and S$32 (US$36) for children on top of regular park admission get the chance to board Sesame Street Spaghetti Space Chase before the park opens. 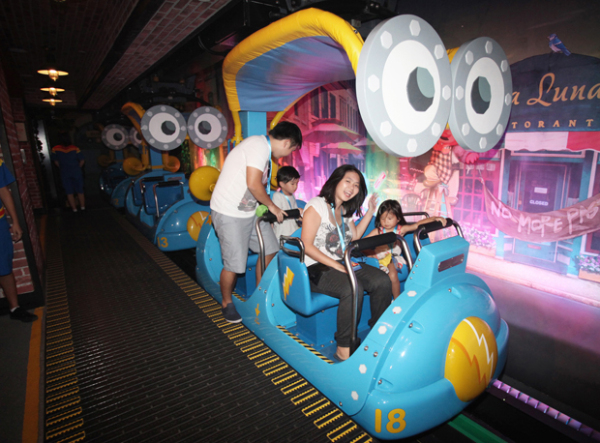