Gary Kyriazi visits Hawaii’s only marine life park to discover why, despite its stunning location, the attraction has to work hard to get its share of the tourist dollar.

In the 60 years since the Hawaiian Islands became a popular tourist destination, and in the 53 years since Hawaii became a US state, Oahu has remained the most frequented of the eight islands. It is also, locals assert, the most beautiful; the most dramatic, varied, and the most beautiful. The crystal clear ocean, the beaches, the volcanic mountains, the waterfalls, the accommodation, the amenities, and the sea life keep the visitors coming.

So Sea Life Park, Hawaii’s only oceanarium, offering up-close and personal contact with Pacific Ocean life, right at the source, and a mere 20-minute breathtaking coastal drive east from Honolulu, should be able to just relax and watch customers flow in, right?

“Well, I wish it was that easy,” general manager Jerry Pupillo, 45, shakes his head and smiles. “But we have to compete the same way everyone else in the industry does. While we’re not competing with any other ocean or wild animal parks here, we’re competing with the visitors’ time. They’re in Hawaii for a fixed number of days, and we have to get them here for part of one of those days.” And Sea Life Park is competing for more than just their time. “While our admission fees are relatively modest ($29.99 for adults, $19.99 ages 3-12), we’re also competing for their money. After all, the beaches are free, the ocean is free, the mountains are free.”

Plus there’s the factor that with oceanariums and aquariums all over the world, Hawaiian tourists would most likely have frequented at least one of them prior to their visit. So why should they go to Sea Life Park?

“And that’s where we believe we’re unique,” Pupillo smiles again. “Our dolphins, sea lions, Hawaiian rays and shark encounters are longer and more personal than anyone else’s. You can get in the water with all of them. This is where our modest attendance is a benefit. Unlike the larger sea life parks that have larger numbers to move, we have more one-on-one time with the animals.” For additional fees, guests can get in the water with sharks, play with the sea lions, snorkel with the rays, and swim with and kiss a dolphin. 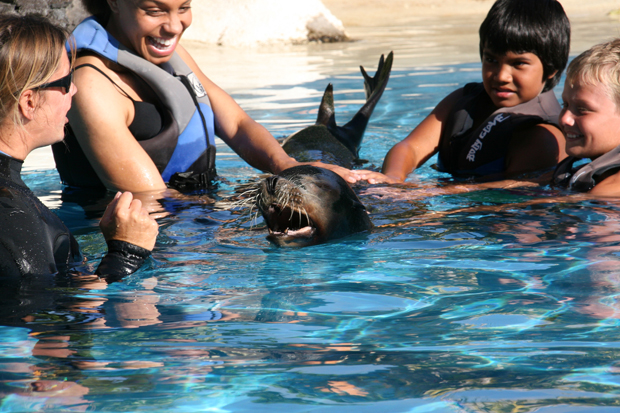 When Sea Life Park opened in 1964 it was less a park than an aquarium, much as are most of the namesake attractions operated around the world by Merlin Entertainments. As the sixties led into the seventies and eighties, and a softer, family feel arrived with the advent of theme parks, the various owners of Sea Life Park had the challenge of bringing its rather institutional look up to date.

The current owner, Palace Amusements/Parques Reunidos, acquired Sea Life Park in 2008. The following year it also acquired the Kennywood Corporation, including Kennywood Park, Lake Compounce and Idlewild Park, and with it the responsibility of moving Sea Life Park confidently into the 21st Caentury.

“There’s been a lot to do, and our budget is strict,” Pupillo concedes, “so we have to be creative with our upgrades, picking and choosing carefully. Our current emphasis is updating the facilities, softening the former institutional look, making such changes that customers may notice but don’t really think about.”

Indeed, old concrete buildings and outdated restroom facilities are what cause customers to review any amusement park as “old” and “run-down.” Sea Life Park has added simple, affordable touches like painting the walkway curbs blue, which against the green plentiful flora, maintains an aquatic feel throughout the park. Asphalt walkways have been re-paved and highlighted with aquatic-coloured tile. Purchasing supplies is another challenge.

“Hawaiian locals can tell you that one of the disadvantages of living here is the cost of receiving parts from the Mainland US, or from anywhere. For example, we needed new garbage cans, but the shipping cost was almost $400 per can. So again we got creative, stripping down our old cans and covering them with vinyl outdoor advertisement wrap similar to those used on commercial vehicles.” They look like bright, brand-new waste receptacles, user-friendly and park-friendly, and money was saved. 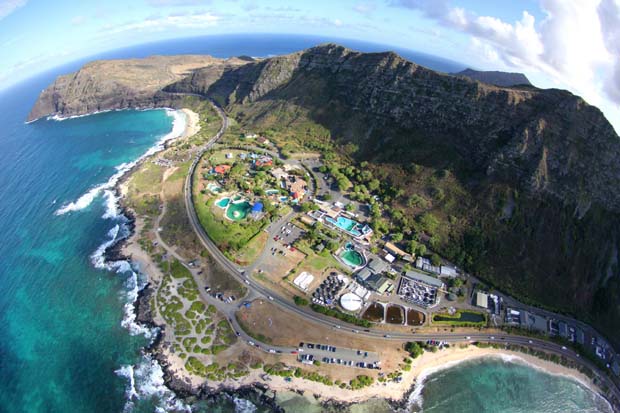 “Also, there’s no down time at Sea Life Park. The fact that we’re open year-round means we remodel and build while we’re open, and that too is a challenge. We do as much as we can after closing hours, but that’s considerably more expensive than daytime labour rates.”

The food facilities were updated with the opening of the spacious, patio-style Sea Lion Cafe in 2011. Its success gave Sea Life Park the confidence to enter into one of its most profitable enterprises, and a must for any visitor to the islands: a luau (Hawaiian-themed party/feast). The park contracts out for the entertainment (Hawaiian musicians and hula girls), but otherwise the food is catered in-house as an expansion of the Sea Lion Cafe.

“We started in 2012 offering luaus three nights per week, and it was so popular that we now offer it 4 nights per week,” details Pupillo. “In fact, we’re the only luau in Hawaii where the pig you see roasting in the pit is the one you actually eat.”

A luau, plus interaction with sharks, rays, sea lions, and dolphins; after all that, what is the greatest advantage that Sea Life Park has over other similar attractions? Like the legendary original oceanarium, Marineland Of The Pacific in Southern California (1954-1987), Sea Life Park is appropriately at the source: the ocean. Watching a dolphin show or enjoying a luau with a breathtaking view of the Pacific Ocean as a backdrop, creates an unforgettable experience. In fact, guests spend a considerable part of their four-hour stay just walking the cliffside path that borders the park, enjoying the view.

“We have plenty of space to expand,” Pupillo says, “but unlike some of the other animal parks, we won’t be adding rollercoasters or thrill rides.” He glances eastward at the infinite expanse of water. “The Pacific Ocean itself is our greatest draw. Sea Life Park is in a strong position, guest-wise and location-wise, to do whatever we need to do.”

With such strong tourism in Hawaii, only 30% of Sea Life Park’s attendance is local. While the locals don’t participate in the interactive animal programmes as much as the other visitors, it is the educational side of Sea Life Park they pursue. “This is a great place for kids to learn, and to see and appreciate just how Sea Life Park contributes to our ecology,” notes general manager Jerry Pupillo. “Our greatest contribution is with sea turtles. We have 500-700 hatchings a year that we release into the ocean.”

The story of The Smiler