Located along the boardwalk, the new four-ride Scream Zone is part of an ongoing effort to revitalise Coney’s amusement area by the NYC authorities, which signed a 10-year lease with CAI after purchasing 6.9 acres of land in 2009.

The city has now spent more than $6.5 million (€4.5m) to support the opening of both Scream Zone and Luna Park, which opened last year on the former Astroland site. Its 19 family-friendly rides helped draw 450,000 people to Coney Island, more than in any summer since the old Steeplechase Park closed 46 years ago. CAI is investing $12 million (€8.4m) in Scream Zone, bringing its total investment in the two parks to $30 million (€21m).

“Last year we brought the fun back to Coney Island, and now it’s time to scream,” says CAI president Valerio Ferrari. “With brand new thrill rides at Scream Zone adding to the 19 attractions at Luna Park and other amusements throughout the neighbourhood, we are confident that Coney Island’s place as America’s Playground is once again secure – and I want to thank our partners at the City of New York for helping make our dream a reality.”

The four new rides at Scream Zone comprise the Soarin’ Eagle, a Zamperla Volare coaster that suspends riders in a horizontal position, sending them on a series of dives and inversions. Steeplechase, a Motocoaster by the same manufacturer, pays tribute to an iconic ride from Coney’s past as it launches riders around a track on horseback. The 100-feet-tall (30-metres) Zenobio, a Zamperla Turbo Force propeller ride, sweeps riders through the air at speeds of over 60mph (97km/h). From Funtime, the Sling Shot launches riders more than 150 feet (45-metres) into the air.

“Last year, with the opening of Luna Park, we targeted the family market,” acknowledges Ferrari. “This year we are going after the teenage market with more thrilling rides. While still early in the season, the reaction to the Scream Zone has been very good and the excitement level has been high.”

Scream Zone and Luna Park are part of NYC’s Coney Island Revitalization Plan, which will preserve and grow the historic amusement area, while creating a mixed-use neighbourhood with new retail and housing. There remains one piece of land at Coney Island that CAI will develop next year. After that, Ferrari expects there will be some ride exchange and replacement as they continue to improve the experience for their guests.

As well as its other interests at Coney Island, Central Amusement International has also won the right to operate the Coney Island’s legendary Cyclone wooden coaster, across the street from Luna Park.

“It is an integral part of the Coney Island experience,” offers CAI president Valerio Ferrari. “It makes sense that we operate it, and will complete our guests’ experience. We have done some track work in preparation for the season and put new padding on the coaster train.”

Previous operator Carol Hill Albert was unable to make the ride pay after the closure of her Steeplechase park at Coney Island. 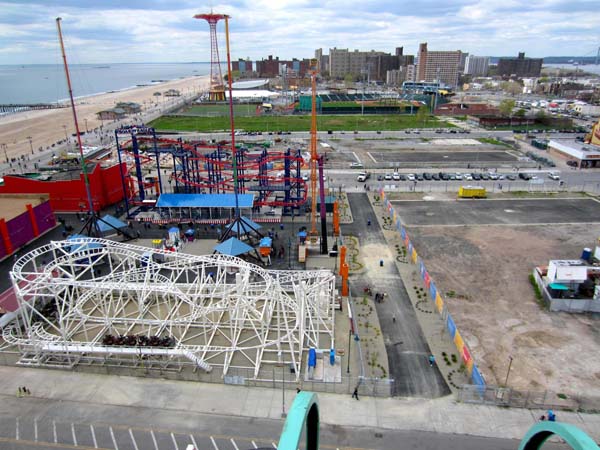