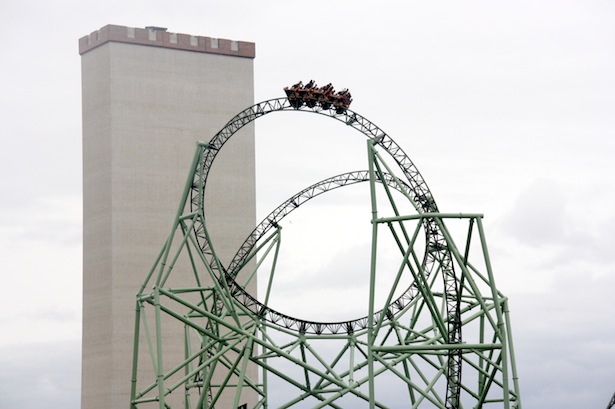 With Der Schwur Des Kärnan we wanted to take some of the best elements of other popular Hansa Park attractions, make them even better and add some new elements. Our guests already gave us a great response to Fluch von Novgorod, our first Gerstlauer rollercoaster added in 2009. That ride features a lot of different elements, including a dark part, which is always exciting.
Kärnan also starts inside a building, and what people do not see is the reverse freefall inside the tower. The thrill is not the actual backwards drop but the expectation as you are going up the vertical lift. It’s even more of a mystery to the people standing outside, wondering what is making the riders scream inside the tower. Eventually the train shoots out of the bottom. 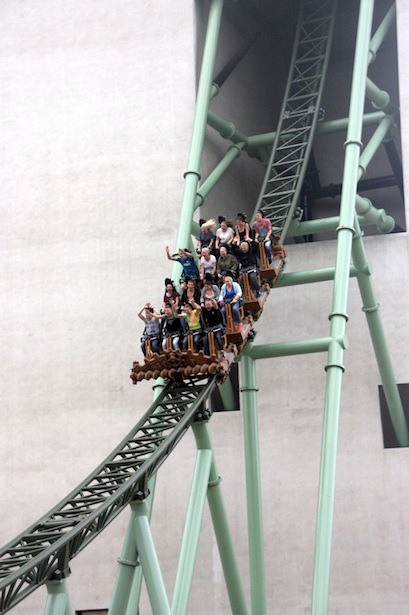 So many parts of the ride are unique it would be difficult for me to pick a favourite. The backwards fall is a strange sensation, the first drop is impressive, and I love the heart-shaped element. It’s the combination that’s so exciting. I also love the heartline roll at the end of the ride, it’s relaxing hang time that you experience there before you have your picture taken; a nice little surprise.

We kept the reverse freefall a secret right up until the day before we opened Kårnan on July 1. It was actually a miracle nothing leaked out. There were lots of people constructing the ride and everybody kept the secret!

Everything went well with construction. We had a mild winter, thank heavens. We had a couple of delays inserting the chain into the tower, the winds being strong not only in the winter but also the summer, but we had other work already done so shifted things around according to the weather. The tower was actually built first, before the lift, starting last summer. You can see all this documented, including a neat little video showing how the tower was built, on our building blog at kärnan.de 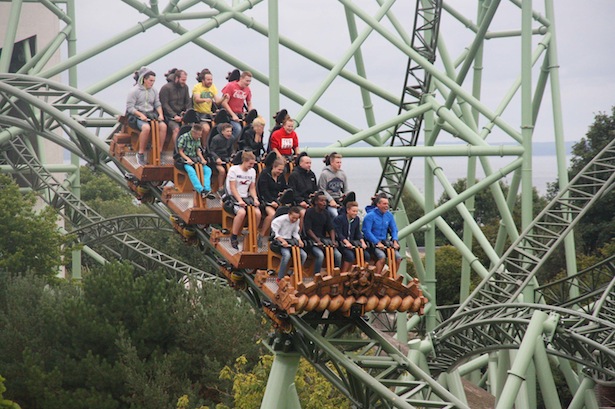 You know, we were not nervous at all about adding this attraction. It may be Gerstlauer’s first hypercoaster but Büro Stengel designed it, they calculated everything and so were a very well-known addition to the team. Why not build a hypercoaster together? The time was right, we were ready, Gerstlauer was ready, all the technical requirements were set, everything was just yelling out to us do it.

In fact, we have a great relationship with Gerstlauer. They were the only manufacturer who would implement our ideas and make them real. We’ve already got Novgorod and Schlange von Midgard by them; why change the winning team? 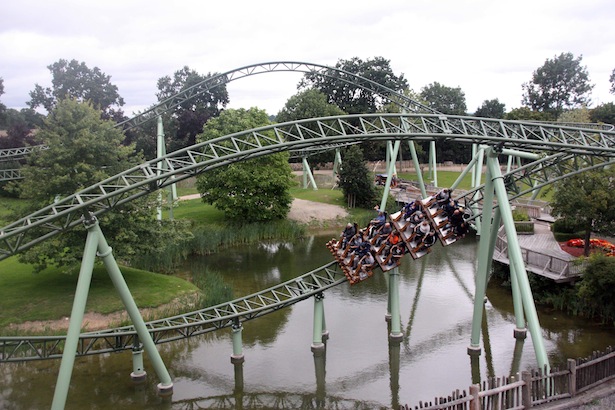 Previously we had a freefall tower in this part of the park (Montezuma by Maurer Söhne, installed in 2000). This is the area of the park where it is permitted to go high. We could not have built Kärnan in other parts of the park, nevertheless at 79m the tower is much higher than Montezuma (48m), and actually quite a lot taller than the original Kärnan tower (30m) in Helsingborg, Sweden.

There is lots of authenticity to the story of the Oath (Schwur) of Kärnan, which like all our new attractions in recent years in based upon legends from the Hanseatic League. It is true that Erik of Denmark was a cruel king, but maybe we added a little licence when it came to the oath being the reason why his castle was never defeated. 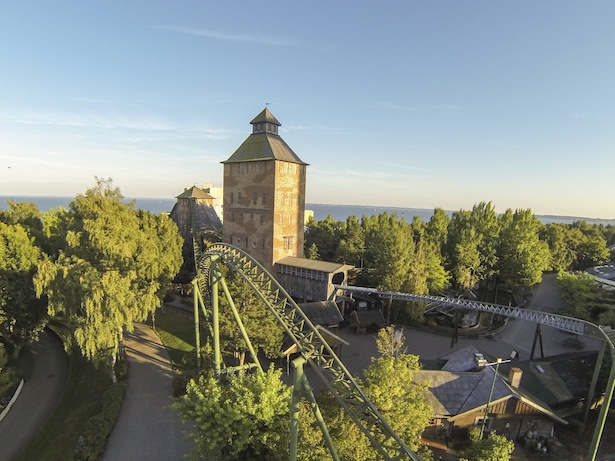 What’s so neat about our general theme, the Hanseatic theme, is that it is so timeless. If we had something like ‘Future World’ or whatever, that would eventually grow old but the Hanseatic League and the historical buildings, they are still there today; I love that.Hansa Park’s two other Gerstlauer coasters –Fluch von Novgorod and Die Schlange von Midgard (left)– both also features a lift inside a tower

We did have an opening date in mind for the new coaster, and of course we were keen to get the ride open as soon as possible because we knew that our guests wanted it, but we did not want to put too much pressure on everyone involved in the construction of Kärnan, including the TÜV. Safety always comes first. We just wanted to make sure it operated safely and reliably, and we were happy to open on July 1.

The park will remain open this season until November 1, so it is kind of early to judge the visitor effect already. We have a very short winter coming up before we open again for the 2016 season on March 24, so it does not give us much time to complete the theming, but obviously the tower and the building will be a large part of it. We have an experienced team here at the park that also themed Fluch von Novgorod. Eventually we hope that the effect will be greater

Clauida Leicht was in conversation with Owen Ralph 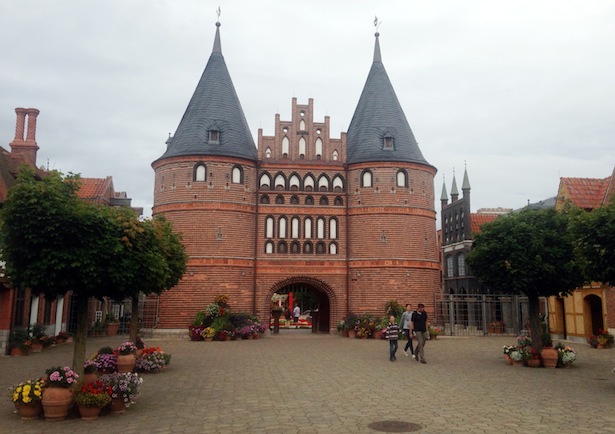 With its 79m-tall tower and signature heart-shaped element high above the ground, Der Schwur Des Kärnan has become a major new feature on the skyline of the Ostsee (East Sea) coastline on which Hansa Park sits. The 1,235m (4,050ft) of track that escapes from the concrete structure also provides plenty of action for the ride’s adventurous passengers.
The coaster’s 73m (240ft) vertical lift, complete with reverse freefall, is preceded by a dark ride section and riders also get to experience a vertical drop, non-inverting loop, heartline roll and several terrain elements as the train races close to the ground and over water. During the 3.5 minute ride, the ride’s 16- seater trains reach speeds of up to 127km/h (79mph).
Each of the three trains is composed of four rows of four seats with lap bars rather than over-the- shoulder restraints. The minimum rider height is 1.3m. Although there is a separate line for single riders, there is no line for the front row and passengers are allotted their seats at the loading platform according to Kärnan’s spell in the pre-show.

As they pass through the ride building, guests’ are immersed in the world of Kärnan with the aid of specially-composed soundtrack commissioned from IMAScore and recorded using a 64-strong orchestra and a 40-strong choir in Budapest.

Located in Sierksdorf, Schleswig-Holstein (Germany’s most-northerly
state), Hansa Park enjoys a reputation as the country’s only amusement park by the sea. Once a Legoland park, its rides and attractions have been rethemed over the years and all new additions are realised in keeping with legends from the Hanseatic League, the powerful confederation that once dominated maritime trade from the North Sea to the Baltic. Other family attractions within the immediate vicinity of Hansa Park include the Ostsee Therme thermal baths complete with waterslides, Sea Life Timmendorfer Strand aquarium and even Sierksdorf’s own banana museum! 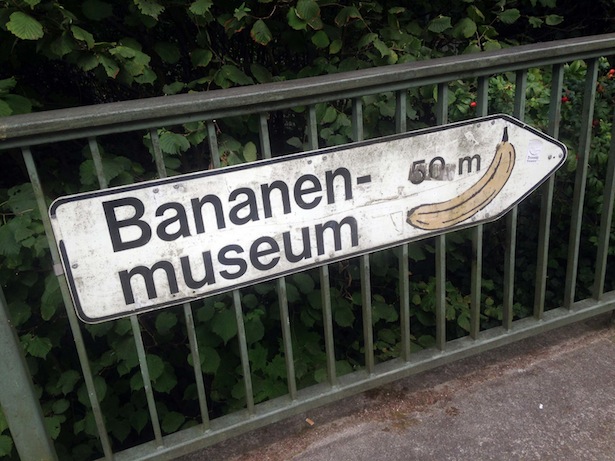 The Oath of Kärnan

Der Schwur Des Kärnan – the Oath of Kärnan – takes its name from a fact-meets-fiction story involving Erik, king of Demark, who took to the throne at the age of just 12 following his father’s untimely death in the early 14th Century.

He swore on his coronation oath, and every oath thereafter during his reign, “ved alle hellige maend” (by all the holy men). Young King Erik lived in tumultuous times. His father’s slayers had been banished and became pirates who terrorised the coastal towns and villages of Denmark. But the young king was oblivious to the problems and worries of his subjects. Instead, he spent his time hosting costly and pompous tournaments and dreaming of conquering faraway countries.

“Our enemies are lurking in the shadows and beyond our borders, but we will build a castle for ourselves and for Denmark — a fortress so strong that our enemies will never be able to invade and destroy it! We swear, by all the holy men.”

The master builder commissioned to build the castle – Kärnan – pondered what to do next. He hurried down to his archives and searched through the writings of his predecessors. He was looking for a special formula that would protect the tower while at the same time punishing the king for his cruelty.
“Once read out loud, a powerful spell will be cast over the tower that will hit all those who intend to attack, threaten, or approach Kärnan,” the builder informed Erik. “My King, though this magic formula would make the fortress invincible, it comes with a high price!”

“I will pay it. I shall raise the taxes,” the king said. He had hardly finished speaking when he looked as if he had aged by 20 or 30 years. Erik died soon afterwards, but in death he had fulfilled his oath and given the kingdom an unconquerable fortress. The castle’s original tower still stands in what is now Helsingborg, Sweden, but an even more imposing version is now available for the exploration of Hansa Park guests, bringing the oath of Kärnan to a whole new generation. Hopefully it too will stand for many years. 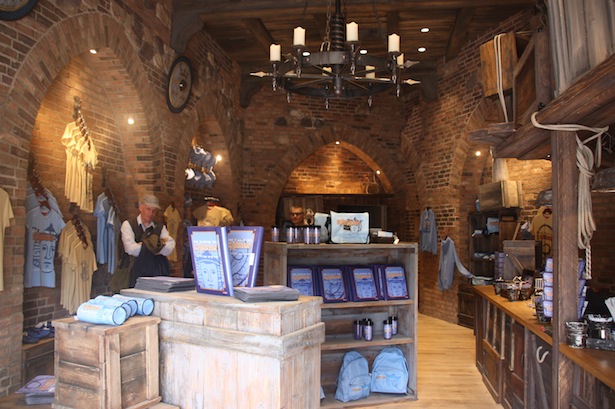