Europe’s only conference and trade show for the scare attractions industry returned this May at a new venue in the UK. Owen Ralph reports.

Now in its forth year, ScareCON remains a relatively intimate affair, but as organiser Michael Bolton noted in his closing address there are more and more haunted attractions opening each year across the UK and Ireland, not just at Halloween. Organisers from five seasonal events were invited to speak at the one-day conference on May 12 at the Village Hotel in Dudley.

Last October Broadditch Farm in Kent attracted between 12 and 15,000 visitors when it held its latest Hauntfest, including five separate haunts. As well as “old favourites” such as an attic, library and toilet scenes, Broadditch added a unique smell to its Spooky Castle last year by placing pig’s heads in the attraction and letting them rot! As well as gruesome tips such as these, speaker John Harris also highlighted the very tight window within which it’s possible to operate Halloween events: “Once you get to November 1 people switch off and don’t want to know about Halloween any more,” he remarked. An appearance from Hauntfest’s clown character – complete with obligatory chainsaw – then brought the conference alive!

Husband and wife Helen O’Driscoll and Altaf Majeed from the Tartan Experience in Scotland decided to avoid Halloween altogether for their debut event Ghosts of Christmas which ran in Glasgow for 23 nights last winter. The couple’s twisted visions of the festive season included evil elves, scary toys and a girl intent to kill her parents because she didn’t like her Christmas presents! Presenting in a session entitled “Scaring on a Budget,“ Helen and Altaf revealed how they had set up their attraction without buying a single prop, and had also been able to lean on local students and actors to help staff the attraction. Yet the harsh weather hindered their efforts as party-goers stayed at home, and the couple lost money. They will be hoping for better fortunes this autumn when they present “Hollywood Hellhouse” at two UK film festivals. 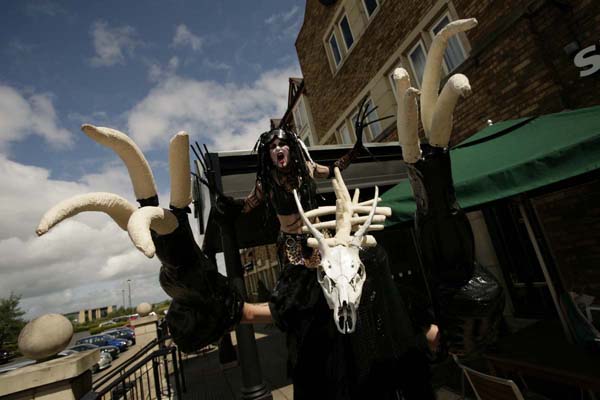 A more family-friendly event was revealed to delegates by Andrew Willis from the Crich Tramway Museum in Derbyshire, which each October presents a Halloween event called Starlight. “Have any of you thought about having a less scary event,” Andrew asked the audience, to which he was greeted with a stony silence. He received more feedback, however, when he asked for ideas, and most seemed to agree the one-night event – which brings in several thousand pounds for the museum – could be expanded to a either at least a full weekend, and may even command a higher admission fee.

Gary Oke of the AtmosFEAR! Entertainment Group, which presents the annual Scream Kingdom in Lancashire amongst other events, spoke after lunch on the subject of marketing and promotion. As well as setting up “personal” Facebook pages for its characters, AtmosFEAR! also sends them out in full costume to distribute leaflets, with fantastic results. The company also produces its own video, which has featured not just on TV, but also several newspaper websites, who are always looking for content.

Representing Alton Towers, the resort’s live performance manager Adam Bayliss discussed its annual Scarefest season, which includes both park inclusive and paid-for walk-through attractions. The latter, Adam admitted are, “a contentious issue, but most guests are more than happy to pay.” Talking about staffing and training, he went to on to state, “The more ownership you can give an actor over an attraction, the more likely they are to turn up,” observed Adam, before adding, “remember your actors are humans and not robots.”

In his closing address, Michael Bolton went ton to highlight not just the growing number of scare attractions across the UK (elsewhere in Europe they seem to be limited to events within theme parks), but also the variety. He singled out, for example, an event called 2.8 Hours Later – a giant Zombie chase through the streets of Bristol, as being particularly innovative. Michael also raised the issue of health and safety and stressed that as the industry got bigger it was important for operators to pull together to present a more professional front. Perhaps, concluded Michael, it was time for the British Association of Scare and Haunted Attractions (BASHA) to reform.

Among the handful of exhibitors on the day was Michael’s own scare consultancy, a couple of make-up artists, a theatre company and provider of scare actors, plus a budding film director looking for investors to back a horror movie.

In the evening delegates were treated to a light-hearted Zombie Science show, delivered by “Doctor Austin” from the University of Glasgow, who hopes to provide attractions operators with a fun but credible insight into the undead. Many of those stopping on for the night put on their must macabre fancy dress for the ScareBall, before retiring to bed. For some, however, there was very little sleep (see panel).

ScareCON will return to the UK next May, venue to be decided.

Anyone stupid enough to book themselves into a “ScareRoom” rather than one of the regular guest rooms at the Village Hotel was in for a sleepless night after ScareCON. This new initiative for 2011 subjected willing participants to a series of “visits” throughout the night as the clock ticked over from Thursday and into Friday the 13th.

“We bombarded people with scares all through the night and will be looking to do more of this sort of stuff soon!” revealed ScareCON organiser Michael Bolton.

Participants were asked to put out a special “Do Not Disturb” when they had had enough and out of 10 participating rooms only three people made it through until dawn! 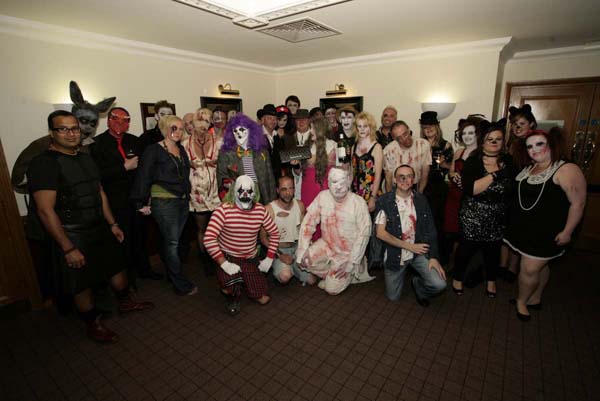