After gaining a loyal following for its Storytelling, Architecture, Technology and Design (SATE) conferences in the United States, the Themed Entertainment Association (TEA) took the concept to Europe for the first time with a two-day event recently in Amsterdam. 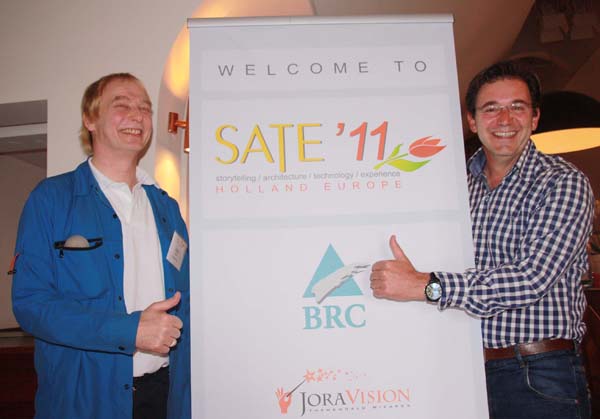 Just short of 100 delegates participated in the two-day proceedings (Thursday 16/ Friday June 17), staged within excellent facilities on the top floor of the Heineken Experience. The result was the one of the best TiLE events that never was.

While SATE Europe was essentially an evolution of previous TEA seminars and get-togethers in Paris and Vienna, it also bore several similarities to the old TiLE (Trends In Leisure and Entertainment) conference which, incidentally, is due for a return in its pre-longed format this October in Florence. None of this should come as much of a surprise as TiLE and the more recent TiLEzone events have always been well supported by the TEA and its members.

One of those members, Jora Vision’s Jan Maarten de Rad, was instrumental in bring SATE to Europe, with Kees Albers from Tape My Day/Unlimited Snow doing much of the work on the ground in Amsterdam. Additional input came from president of the TEA’s Europe and Middle East Division, Phil Hartley. The seminar programme was presided over by conference chairman Reinoud van Assendelft de Coningh, with individual chairs assigned to each of SATE’s four key themes.

The organisers pulled off something of a coup by persuading Walt Disney Imagineering stalwart Marty Sklar to attend as keynote speaker. Now semi-retired (no one ever retires in the amusement industry), he imparted wit and wisdom gleamed during a 56-year theme park career, during which he became the only man to be involved with the opening of all 11 Disney parks worldwide.

“Save you money, don’t enter our business,” Walt Disney was told by travelling carnival operators at the time when he started work on Disneyland in the 1950s, but of course many of his “crazy” ideas have become standard industry practice, including storytelling within attractions, pay-one-price entry and catering to “guests” rather than “customers.”

During his speech entitled, “The Best Advice I Ever Heard!” Marty shared many more quotes and anecdotes before instructing delegates, “Don’t avoid clichés. They are clichés because they work.” If the staying power of some of the attractions he highlighted is anything to go by, then maybe he had a point. 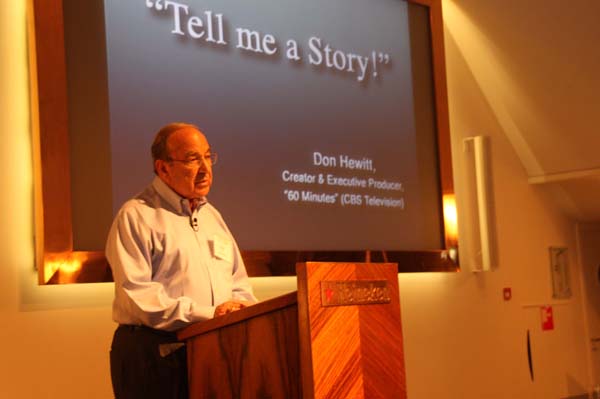 “No Story, No Glory,” was the mantra from Hester Kloosterboer in her introduction to the Storytelling session, before introducing BRC Imagination Arts founder Bob Rogers, who discussed his firm’s work reinventing the Heineken Experience. Since 2009, the venue has rocketed from 302,000 to almost half-a-million annual guests (there’s that word again), and is now facing impending capacity issues. A nice problem to have for what is now Amsterdam’s top-rated tourist attraction, arguably more compelling in content than a certain beer is brimming with taste.

Representing Dolfinarium Harderwijk, Steve Hearn and John Ruisch highlighted their dolphin show Droomwens (Dream Wish), which has become a very popular addition to the park by integrating a story into the performance. A competition to find a girl to star in the show attracted 30,000 applicants, while yellow alarm clocks are now one of the park’s top-selling retail items thanks to featuring in the show.

Driving over the border just 48 hours before the launch of his new attraction Van Helsing’s Factory, Movie Park Germany general manager Wouter Dekkers discussed the role of intellectual property (IP) in amusement parks. When it lost its Warner Bros licence in 2005, the park was forced to find some new IP. After an unsuccessful attempt developing its own “moviecals” the park has enjoyed success with new brands including Nickelodeon and Shrek 4D. Although major licences like these cost money, Wouter pondered, “Outside of the really big parks, how many successful IPs have actually been started in a theme park?”

The morning’s speakers, including Marty Sklar, then sat in on a panel session, bringing the morning’s Storytelling session to a close. After lunch in the pleasant Moldenzoler room, omnipresent conference fixture Ray Hole presided over the Architecture session.

“We had no plan at the beginning,” was the rather frank admission from Denis Laming, architect at the birth of Futuroscope 26 years ago. A publicly-financed project designed to stimulate the area around Poitiers in France, the science park has now welcomed over 45 million guests, but nevertheless Laming’s admission highlighted the folly of designing a space without knowing what’s going in it.

According to Peter Slavenburg, of Dutch exhibition and brand experience designer Northern Light, buildings can relate to the content inside in one of three ways. The NEMO science centre in Amsterdam, Landesmuseum in Stuttgart and Media Experience in Hilversum were examples provided of attractions that either ignore their own architecture, relate to it with a sense of authenticity or feature an intense synergy between building and experience. Other speakers during the Architecture session include Center Parcs’ creative director Michel Linet-Frion and Jacques Ferrier, architect of the French Pavilion at Expo 2010 in Shanghai, where it is now one of only six pavilions still standing.

Courtesy of Unlimited Snow, delegates were treated to a fun evening at Boom Chicago with a dinner show called Social Media Circus. With input from the audience, one improvised sketch centred around a team of theme park designers working for a Middle Eastern dictator. Too close for comfort?

From London, Dave Pattern of the National Museum of Science and Industry got things underway for Friday morning’s Technology session, which was chaired by David J Willrich. While smart phones present many opportunities for museum operators it was important to remember, said Dave, that the majority of visitors do not actually own them (yet).

Not only is it important co consider how technologically-adept your audience is, developers of attractions should also avoid using technology for technology’s sake, warned Electrosonic’s Chris Conte. “How much ego is tied up with having the latest and greatest?” he pondered, adding that it this particularly common in Asia.

“People come to us in their leisure time so we shouldn’t make them work too hard,” observed Julia Delaney from the Continuum Group in the question and answer session that followed. “People just bang a button and move on.”

Lesley Morisetti, ex-AECOM but now working independently as LM Associates, was chair of the conference’s final afternoon session, focusing on Experience, and her first speaker was Merlin Entertainments’ Duncan Campbell. As the group’s new business strategy director, Duncan and his team analyse a wide range of factors before choosing sites for Merlin’s various attraction brands. With 31 new attractions under its belt since 2000, Merlin has built up a huge knowledge base, and Duncan warned delegates of potential pitfalls including an over acceptance of data, failure to understand consumer types, misreading guest motivation and cultural differences.

There was a beer for everyone in the room during the presentation from Heineken Experience manager Dirk Lubbers, who noted that only was the attraction enjoying good attendance, but it was on course to break even by 2012. While it is unusual for many brand centres to make money, as Lesley Morisetti noted later, here it almost didn’t matter as the Heineken Experience has another role to fulfil: “If anyone comes here then when they go out to another bar in Amsterdam they are likely to drink Heineken,” concluded Dirk.

Tim Baker of Touchstone Research offered some useful insight into how to conduct surveys in order to ensure reliable, representative result. During one of his typically interactive workshop session from consultant Tony Sefton of Vision XS we learned, amongst other things, that visitors in the USA and Iran are most likely to seek religious content in their attractions, interactive rides and more in demand in the UK than Poland, and when it comes to bartering in an attraction’s retail store, guests in India, Pakistan, Iran and Egypt are the most demanding.

For those that didn’t have flights to catch, there was more free beer at the end of this, an enjoyable and educational two days, which is likely to be repeated in 2012. Like some of the more recent TiLE  events, SATE Europe suffered from one significant flaw, however: there weren’t enough attraction operators in attendance. So, if you’re reading this and can spare the time in your schedule next summer, do visit. It’s a great opportunity to network in relaxed surroundings with industry professionals representing a wide range of disciplines. 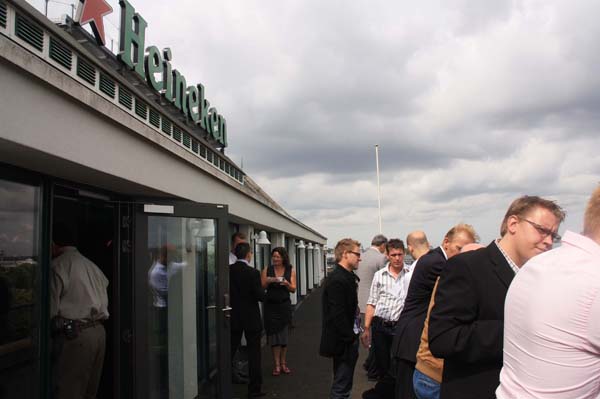 The original SATE conference returns to Orlando on September 22 and 23. A highlight of the programme looks likely to be From Autobots to Decepticons, a showcase of recent Universal projects King Kong 360 3D, Transformers: The Ride 3D and Despicable Me! with contributions from Universal Creative’s Thierry Coup, Dale Mason, Mark Rhodes and Mike West. Other sessions confirmed so far include Digital Dome Stories, Story & the Art of Theatre; The Architecture of Engagement; Interpretive Storytelling, The Art of Weaving Facts into Fascination; The Use of Technology to Create a Compelling Personalized Experience in a Group Environment; and Placemaking on the World’s Biggest Cruise Ships