Often amusement parks engage the services of local engineering firms and steel contractors to assemble rollercoasters. Spotting a gap in the market, German ride operator Max Eberhard founded RCS (Rollercoaster Construction Services) in 1999 to offer a turnkey solution to park operators and ride manufacturers. Here he reveals exactly what it takes to construct a coaster.

Now employing a flexible team of up to 50 foreman and technicians, RCS deals directly with most of the major coaster designers including Intamin, Vekoma, Maurer Söhne, Mack, Huss and S&S.

What services do you offer?

It varies from project to project, but can include everything from the unloading of the coaster and checking of parts to mechanical steel assembly, electrical and hydraulic assembly, testing support and commissioning. It’s also about quality assurance. You will not find this range of services with any other company.

We have broadened our capabilities in the last two or three years and now have two complete container villages consisting of workshop containers, tools containers, and even kitchen containers. One is in Europe at the moment; one is in Abu Dhabi. Tools are very important. Without the right tools you cannot work.

How did you get involved with constructing rollercoasters?

My family travels a number of rides in Germany, including a Mack Wild Mouse and a ride from Mondial called the Airwolf. We used to have a big Nauta Bussink ride called the Evolution and travelled that around the fairs for four years before my father sold it to Mirabilandia in Italy. Then the park part-exchanged the ride with Vekoma, who sent it New Jersey. Vekoma needed someone to install the ride, so that was my first job, as a supervisor to Vekoma. I quite enjoyed it and thought I would like to do more of this instead of working on the fairgrounds.

The other thing was that we already has quite a lot of equipment, cranes etc, with our own rides and it was not really efficient to have them standing still all winter.

What advantages do you offer to park operators?

As showmen we are already used to working in a very limited time and space, and I think this is interesting for the parks. A good example was Insane at Gröna Lund last year. The space was only 20 x 10 metres and we did the steel structure in seven days. The whole project was done in two-and-a-half weeks, and the ride opened on time. A local company would have needed a minimum of six weeks.

What is wrong with using a local contractor?

Coaster projects can be very complex, and installation times have to be kept. It’s important not to have a local steel company that is doing it for the first time, but to use someone who has experience. We are installing a lot of launch coasters now where the tolerance is a lot more precise than standard steel structures. The tolerance of a normal steel structure is 1-2cm, with an Intamin launch coaster it is 0.2mms. That’s a real speciality.

It used to be that the local company would do the steel structure, then you had the lift, the chain, some brakes and that’s it. Now you have a lot of extra things. So a park has to hire another company to do mechanical things, then a third company for the electrics, company number four for the touch up and painting, and a fifth company for testing and commissioning. That’s four of five companies on one job, and you have to manage them all on site. This costs money, money, money …and time. From unloading to pushing a button to make the ride go, we do everything.

Who are your clients – the parks or coaster manufacturers?

For 70% of the time we work directly with the manufacturers, but in a growing number of cases we work with the parks. For example, in 2007/8 we did the mine train (Mammut) at Gardaland and the Vekoma coaster at Tibidabo directly for the park. We always work in close co-operation with manufacturer, but often it can work out more affordable this way for the park.

Below: One of the RCS container workshops 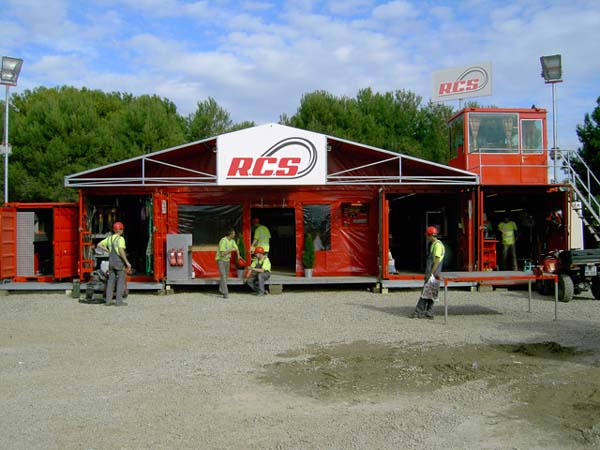 Do you only install rollercoasters?

Mostly, because coasters have the most jobs to do. However, when a park already has a good relationship with us, we get asked to do other things. At Terra Mitica, for example, we assembled a spinning coaster, but then they gave us the order to assemble a panoramic tower they had bought from Heide Park because we were already there. Then we relocated a Suspended Looping Coaster from one side of the park to the other. We often do things for the park that they did not consider at first. When they are selling a ride, often the deal includes relocation and installation, so we do that as well as they usually do not have the necessary staff or huge scope of equipment that we have.

What could parks do to make your job easier?

Get us into the project as early as possible and to keep the promises when it comes to construction work. We are dependent on the groundwork and foundations.

What is the biggest challenge – the ride or the site?

Every time is different, but very often the site is the challenge. As we work with some of the premier manufacturers, usually we are very well supported. The launch coaster we did at Tusenfryd in 2006 was the third attraction of its kind that RCS had done for Intamin, but it was a very challenging installation because of the rocky terrain and Norwegian winter!

What have been some of the most challenging installations?

In Lebanon some years ago we installed all of the rides at Habtoorland – on a very big hill. That was a very challenging site and after that we thought anything was acceptable!

In Abu Dhabi, at Ferrari World, the site was easy, very flat, but due to local regulations and the climate it was hard work. In the summer we had over 50ºC heat and 80% humidity! I was really proud of my guys for doing a good job in such conditions.

At Power Park in Finland we installed a Vekoma coaster in minus 30ºC. It was so cold my foreman’s coffee froze to the crane! I gave the staff special clothes for working and my Polish guys asked, “Are we going to war?”

What are you working on at the moment?

We recently finished the new coaster at Alton Towers. As for upcoming projects, let’s just say that we will be spending a lot of time in Rome over the next year, assembling a number of coasters and other attractions.

Now that we have the second container village we can also do more in the Middle East, and even Asia and the United States. In the current economic climate I imagine we will be doing a lot more relocation and servicing of attractions. 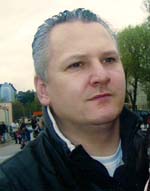