US Thrillrides has confirmed that it is to build the world’s tallest rollercoaster in Orlando – one of two new observation experiences coming soon to the International Drive district.

The Skyscraper at Skyplex (pictured) will stand 570ft-tall (173m) and comprise a vertical rollercoaster wrapped around a 535ft observation deck. To reach the top of this, the highest structure in Central Florida when it opens in 2016, visitors will ride in one the region’s tallest glass elevators. The attraction is expected to debut in 2016, forming part of the wider Skyplex mixed use complex. Before that, in 2015, Merlin Entertainments is planning to open the USA’s second tallest observation wheel, the Orlando Eye.

The Skyscraper will be the second Polercoaster from US Thrillrides. The first, standing over 325ft, is due to open next year at Lakepoint Sporting Community near Atlanta, Georgia. According to company president Michael Kitchen, both rides will offer, “all the thrilling mayhem of a great coaster experience but in a very small footprint.”

Located at the junction of International Drive and Sand Lake Road, Skyplex is being developed by David and Joshua Wallack, owners of Mango’s Tropical Café in South Beach, Miami. The 495,000 sq ft (46,000 sq m) indoor entertainment complex will include opportunities for additional attractions, entertainment, restaurants and retail. The concept was conceived in 2012 soon after Joshua Wallack began investigating parking garage locations for a second Mango’s restaurant in Orlando. It soon mushroomed into something much larger. After being contacted by US Thrillrides, the Wallacks rolled up five contiguous sites comprising 12 acres of land with 300ft (91m) frontage on International Drive and committed $200 million to the project.

S&S Worldwide has been subcontracted to build the coaster on behalf of US Thrillrides. The observatory and restaurant and lounge at the top of the Skyscraper have been designed by international Orlando-based architects HHCP, and will be constructed by local firm Euforria. 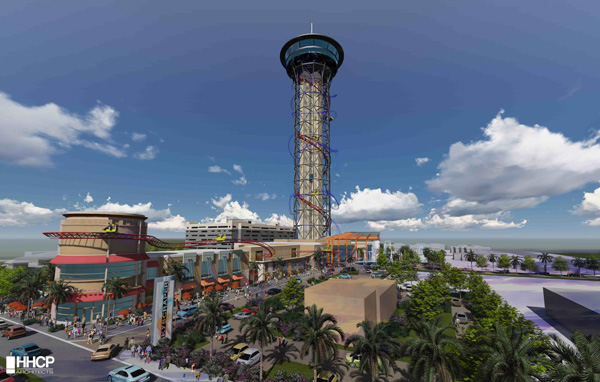 Midway along International Drive, construction has already begun on the Orlando Eye, which will form the centrepiece of a mixed use development of the same name. The wheel’s A-frame and central hub now in place (see progress here). When complete next year, the 425ft-tall (130m) ride will operate alongside a Sea Life aquarium and Madame Tussauds celebrity waxwork attraction – all courtesy of Merlin Entertainments. Located on the former Mercado site, sandwiched between Charley’s Steakhouse and Pirate’s Cove Adventure Golf, the development was originally due to be called I-Drive Live.

“Next to our theme parks, International Drive is one of the most recognised icons of Orlando,” notes Visit Orlando president and CEO George Aguel. “It’s exciting for our tourism community to see this type of investment being made to continuously raise the bar on the dining and entertainment experiences we offer across our destination.”

“We’re extremely excited about creating a record-breaking, must-try attraction on International Drive,” adds Joshua Wallack. “Nowhere in the world will you have two iconic structures like The Skyscraper and the Orlando Eye.”

For now, tourists can enjoy sky high views of International Drive from attractions such as the Star Flyer and Sling Shot at the Magical Midway, or from the top of hotels including the Hyatt Regency or Rosen Centre – familiar to attendees of the annual IAAPA Attractions Expo – or perhaps even take a helicopter tour over the area. Even The Skyscraper and the Eye won’t be able to beat that.