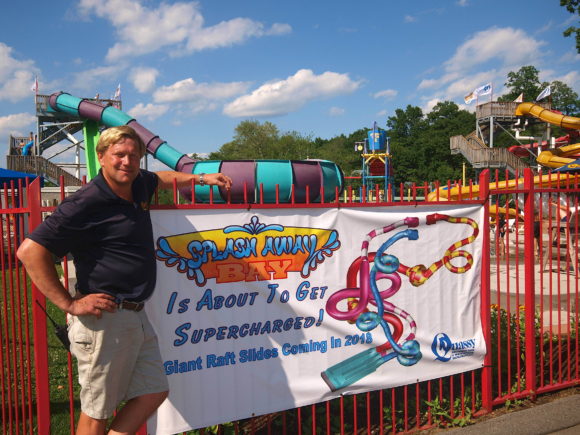 Splash Away Bay waterpark at Quassy Amusement Park, Middlebury, Connecticut, will get ‘supercharged’ for the 2018 season. Three new gigantic water raft rides with a combined length of more than 1,000 feet will be constructed during the offseason, bringing to 15 the number of slides in the lakeside complex.

“We’re thrilled that we can start the project later this summer and have it completed for the waterpark’s opening next year,” said park President Eric Anderson.

In addition to the new slides, Quassy will also construct Splash Away Bay Café & Deck overlooking Lake Quassapaug. Guests at Quassy Beach and the waterpark will be able to purchase food and beverages at the café and enjoy rooftop seating.

ProSlide Technology will provide the new slides, with the largest of the three being the TantrumTwist, also known as Tornado, which will accommodate two-person rafts. The patented funnel shape flushes riders up the Tantrum walls, oscillates each tube multiple times and generates a suspended-weightlessness sensation. After dropping into the funnel, riders are swept up the wall to the equator line, which is actually perpendicular to the ground. The ride creates the illusion of going over the edge.

Two gigantic Pipeline serpentine slides will round out the three-ride attraction. The new slides will all depart from one platform and conclude in runoff troughs near Saturation Station. The Pipeline slides are designed for single or two-rider rafts.