Quassy – a family business forging ahead

Ahead of the 2011 season, Ron Gustafson reveals how this small, family-owned business is forging ahead during challenging economic times.

“We’ve had to remain focused in recent years,” says Quassy owner Eric Anderson as he surveys work on the new wooden rollercoaster nearing completion. “We’ve been fortunate in that our long-term goals in updating the property have not fallen victim to the economic climate.”

The birth of Wooden Warrior from The Gravity Group is a prime example of how the park has aggressively continued to reinvest in itself and the community during a timeframe when many small businesses have failed.

“We’ve been here more than 100 years and plan on being here for many more to come,” adds co-owner George Frantzis II, whose family purchased the park in 1937. “People certainly wonder how Quassy can be building a marquee attraction like this when the economy is struggling. We strongly believe that had we not made the decision a number of years ago to reposition ourselves as a business – including reinvestment – we probably wouldn’t be here today.”

Wooden Warrior was conceived several years ago as part of a five-year strategy embraced by Quassy’s owners. Despite some setbacks, the park saw the first phase of the plan come to fruition in 2010 when it added a new family drop tower by SBF/Visa.

“Not only do new attractions bring people back to the park, but they also bring in new customers,” highlights Anderson. “Our goal for new attractions is to provide experiences that a family can enjoy together.”

Such is the case with Wooden Warrior that it will have more than 1,200-feet (365-metres) of track, yet not be a white-knuckle experience.

“That [extreme rides] is not who and what we are,” adds Frantzis. “We want children to ride their first rollercoaster here at Quassy and do it with their parents and even grandparents.”

As Anderson and Frantzis prepare the park for reopening later this month, they also reflect on the condition the lakeside property was in less than a decade ago.

“Quite frankly, the park was falling into disrepair during that period,” recalls Anderson, who started working in Quassy’s arcade as a youngster. “We realised then that in order to turn things around, we had to start reinvesting in the park.”

It was in 2002 that Quassy announced it would build Saturation Station, a state-of-the-art interactive family water play area from SCS Interactive/ProSlide, complete with cascading fountains, water cannons, slides and a huge dumping bucket. That, too, was a huge undertaking for the small family business at the time, but one that would quickly reap dividends.

“It’s been said time and again that Saturation Station probably saved the park,” Frantzis reveals. “Looking back, we certainly all agree with that observation now.”

The $1 million-plus price tag that the new attraction carried with it posed a big gamble at the time, especially when its inaugural season in 2003 turned out to be one of the wettest summers in New England history.

Calm After The Storm

“It rained virtually every weekend that season and really put a damper on our hopes of seeing a substantial return on the investment,” Anderson recalls. “But when we had good weather the attraction was packed, so that was a clear indicator that we were on the right track.”

The park managed to turn the corner and started bringing in more family attractions. A Yo-Yo swing ride from Chance made its debut in 2004 and, thanks to the success of Saturation Station, two gigantic new Tunnel Twister slides were added to the waterpark in 2006.

Quassy celebrated its centennial in 2008 with the addition of a Galleon (pirate ship) by Zamperla and a three-lane family fun slide from Childress. Now, with the new five-year plan, the park will invest around $5 million.

“As the economy tanked, a lot of people were wondering if we would really be able to follow through with our plans,” Anderson observes. “We simply couldn’t roll over and play dead – we had worked too hard to get this masterplan off the ground.” 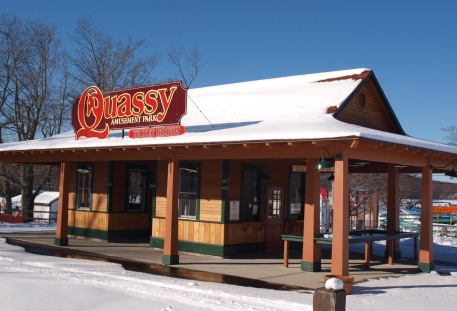 In 2009 the park opened a new main ticket booth fashioned after the trolley station which once served the historic property. It was a public statement and proof that Quassy was ready to make good on its plans new attractions would follow in the years to come.

“Other businesses were curtailing simply to stay afloat,” notes Frantzis. “Unfortunately a lot of people lost their jobs. We could have thrown in the towel and no one would have though twice about it.”

But the park forged ahead and in the fall of 2009 brokered a deal to purchase the drop tower, which proved an instant hit when it opened the following season. Complete with an LED lighting system, it looked a picture after dark. Yet uncertainty still hovered over the remainder of the 2010 season as the struggling economy continued to make headlines.

“We didn’t know what to expect going into 2010, except we had put a lot of money into a new ride,” Frantzis recalls.

The summer of 2010 turned out to be very successful for the park as dry weather prevailed and guests didn’t shy away from visiting. Business was brisk enough that by mid-July Quassy broke ground on the new wooden coaster – the largest undertaking ever for the 20-acre park.

“We had anticipated starting after Labor Day [in September], so not to disrupt our day-to-day operations,” Anderson says. “As it turned out, our early start generated a lot more interest among our guests as they could see work being done.”

The project has also pumped a lot of money into the local economy, creating work for excavators, crane companies and a local construction team. Where possible, local vendors have also been used to supply parts for the ride.

Though it remains as a seasonal business, Quassy Amusement Park has broad economic impact on the local communities. The park employs a full-time sales, office, marketing and maintenance staff. During the six-month operating season, the park hires hundreds of college and high school students as well as adults seeking summer employment.

“It’s a rite of passage in our local communities to work at the park when you are in high school,” says Frantzis. “We have had several generations from the same family work here throughout the years. We’re a vital part of the community when it comes to student employment.”

Other businesses, such as hotels, restaurants, gas stations and shopping complexes, benefit from having the amusement park nearby. Quassy also plays host to numerous community events throughout the course of each season and supports hundreds of others with in-kind donations.

“We are philanthropists at heart,” says Frantzis. “During the course of a year we support so many projects here at the park I would have a difficult time naming them all.”

As for the park and its future, the multi-year reinvestment plan calls for additional waterpark attractions, which could be in place within the next couple of years. The two hands-on owners agree that what has been taking shape in recent years is cause for optimism.

“The park is generating a great deal of positive attention nowadays,” notes Anderson. “We took the initiative to pave our way in times of uncertainty – setting the bar high for ourselves. We’ve been clearing the hurdles and are excited about what’s in store for the park and our guests.”

“Each year there are fewer and fewer family-owned amusement parks left in the country,” adds Frantzis. “We’re a survivor for some very good reasons.”

Ron Gustafson is Quassy Amusement Park’s marketing and public relations director. A keen historian, he has authored two books and hundreds of articles about the industry. Ron is also the editor of the New England Association of Amusement Parks and Attractions’ (NEAAPA) newsletter and serves on both IAAPA’s Hall of Fame and marketing committees. 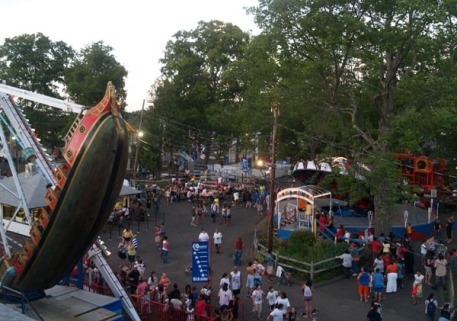