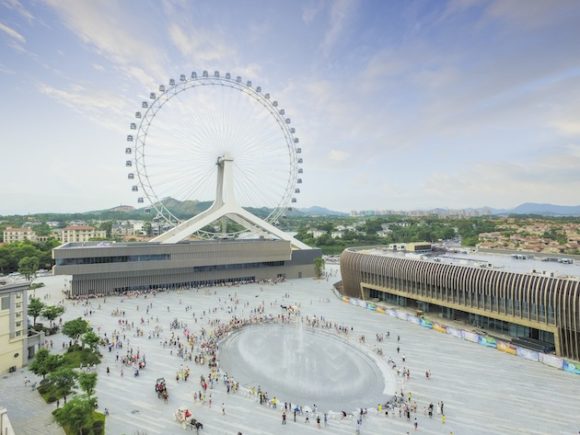 Built above a shopping mall in the Guangdong Province of China, the Qingyuan Delight is believed to be the country’s tallest rooftop observation wheel.

The attraction towers 101-metres (330ft) over the Mayland lake resort in Qingyaun, north of Guangzhou, and features a wheel diameter of 84m (275ft). Built by the Shanghai Amusement Machine Engineering Co Ltd (SAME), the ride was officially opened last May, and is similar in appearance to a wheel completed by manufacturer in the northeastern Chinese city of Tianjin in 2009.

Yet whereas the “Tianjin Eye” is accessed by a bridge carrying a highway, to board the Qingyuan Delight, passengers must climb to the second level of the shopping mall. The ride’s 48 eight-seater gondolas offer views of the Mayland lake and surrounding scenery. On a clear day, we are told, passengers can even see the famous Canton Tower in Guangzhou.

The Qingyuan Delight’s simple chevron bracing echoes the building’s simplism aesthetics. Moreover, hundreds of thousands of LEDs bring the wheel to life after dark, as music plays in the plaza below. In installing the wheel, the shopping mall’s owner’s hope to improve the commercial value of the surrounding “culture strip”.