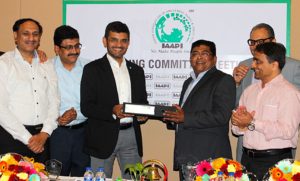 International amusement industry veteran Pradeep Sharma has been appointed to the role of President for the Indian Association of Amusement Parks and Industries (IAAPI).

Sharma has been a part of IAAPI for 17 years and was the Vice President of IAAPI before assuming his presidential role. He has chaired various committees such as safety, training, and manufacturers and exporters. As the chairman of the safety committee, he has actively contributed to IAAPA’s safety standard harmonization meetings for several years. Sharma also drafted India’s first safety standard for amusement rides (IS 15475 – Amusement Rides Safety) for the Bureau of Indian Standards on behalf of IAAPI, which was adopted and published with few changes.

Sharma has a breadth of experience that spans over 20 years and has seen him work with a variety of international suppliers, lead operations for EsselWorld/Water Kingdom, and run his own company, Bombay Amusement for the last 12 years. As of 2013, he has been helping to develop the waterpark market in India as WhiteWater’s Vice President of Business Development. One of the many notable projects that Sharma has undertaken was the opening of India’s first international waterpark, Wet N Joy, in Lonavala in 2016. Later in 2018, WhiteWater will install India’s first ever Shoot The Chute water ride at Magic Mountain and will supply all of the new rides for the renovation and expansion of Shanku’s Water Park Resort in Ahmedabad.