Despite its 20 years in the attractions business, the Dutch design firm P&P Projects had never done any work for Efteling until recently. Now it’s completed two jobs for Holland’s most famous theme park.

“They [Efteling] have always tried to keep the theming in house,” explains P&P owner and lead designer, Philipp van Stratum. ”However, we got a request from the park last October. They wanted to build an animated dragon for their new wooden coaster, Joris en de Draak (George and the Dragon). We made a 1:20 scale model, which was presented to the board of directors, and we got the go ahead.”

Joris opened at Efteling on July 1, and the animated figure that accompanies (pictured here) it is a complex construction featuring many neck movements and a flame effect, the equipment for which had to be concealed inside the dragon. P&P also helped the park produce some themed branches for its Sprookjesboom (Fairytale Tree) attraction.

P&P received only a very loose brief, that the parade should be different than the last one, and so its staff had to travel to Seoul many times to discuss ideas with the client. They then faced obstacle of doing everything through translators. The result, which opened last year to celebrate the park’s 20th anniversary, is a production that celebrates many of its major attractions on a series of “flying” floats.

P&P was responsible for all aspects of the parade, including float design, costume design, prop design, special effects, music and choreography. Each float has its own music, which is synchronised with the overall theme.

“Because this was an indoor installation,” says van Stratum, “the sound issue was very sensitive, but our music team managed to handle it. Another challenge was doing the choreography. The performers do several shows daily, so we had only two to four hours a day to train a cast of approximately 100!”

Other P&P work recently included theming for two rides at Ferrari World Abu Dhabi and an ongoing contract by P&P Project Development to develop a children’s visitor centre for a large Ukrainian sweet manufacturer. Based in the capital of Kiev, this is P&P’s biggest project yet. More to follow in Park World.

Pictured below: The new parade by P&P Project Development at Lotte World. 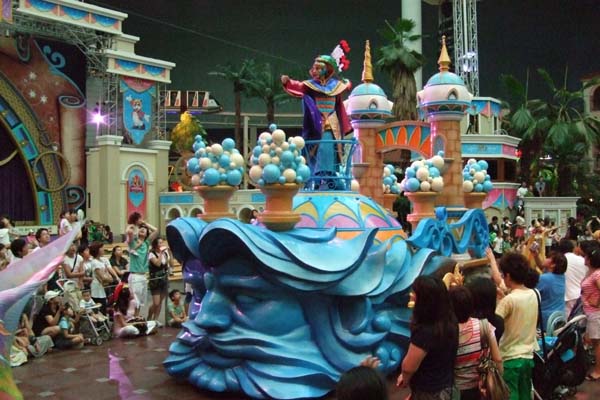