The Dutch design firm P&P Projects is currently working on plans for as many as seven dark rides in Europe and the USA – including a 3D adventure for Tusenfryd in Oslo, Norway.

“For years rides like Spider-Man were beyond the reach of many parks because of the cost,” notes P&P founder Philipp van Stratum. “The falling price of technology has made these kinds of attractions much more affordable and we can confirm that the budget for Tusenfryd is a fraction of what was paid for Spider-Man all those years ago; however we have still aim to put the bar very high.”

The park’s owner, Parques Reunidos is quoting an investment of €6.5 million for the attraction, working title Mijolnir. The “baby” of Tusenfryd director Bjørn Solli Havard, the experience will not be interactive, partly because the park already offers such an experience in its Alterface ‘5D’ Haunted House.

P&P will provide turnkey theming and content. The storyline will be based around rich Norse mythology, as riders go to battle with the Hammer of Thor. The content will be delivered as a mix of 3D and 2D media across 11 scenes, complemented by various theming – but no animatronics.

“If you’ve got good content on screen, you don’t really need any moving figures as it only distracts from the rest of action,” observes van Stratum. “We hope that this ride will be like an action movie brought to life!”

The project will open in May 2013, and bring new life to cave-like building that housed a older Viking ride which had stood idle for several years.

Meanwhile a new park in Turkey, Vialand has engaged the services of P&P Projects to help it realise an interactive dark ride in which riders must save animals from poachers. The attraction will feature six scenes and a mix of animated effects and media-based content.

Using ETF Mystic Mover ride vehicles, the format is expected to be similar to the Knight’s Quest dark rides P&P has produced for Legoland Discovery Centres (LDC) in Kansas, City, Atlanta and Manchester, England. A further two rides are planned for LDC outlets in Chicago and Dallas/Fort Worth. Vialand, meanwhile, will be located in the Turkish capital of Istanbul.

To mark the release earlier this year of the film Ice Age 4, Movie Park in Germany (another Parques Reunidos property) is refreshing its Ice Age dark ride. P&P will co-operate with 20th Century Fox to introduce new characters from the film into this boat-based adventure.

In P&P’s pipeline for 2014 are dark-ride based projects for two of the biggest parks in Europe, in France and Germany respectively. Park World is not at liberty to mention the parks’ names, but readers can probably make an educated guess.

Pictured: An artist’s impression of the new ride for Tusenfryd 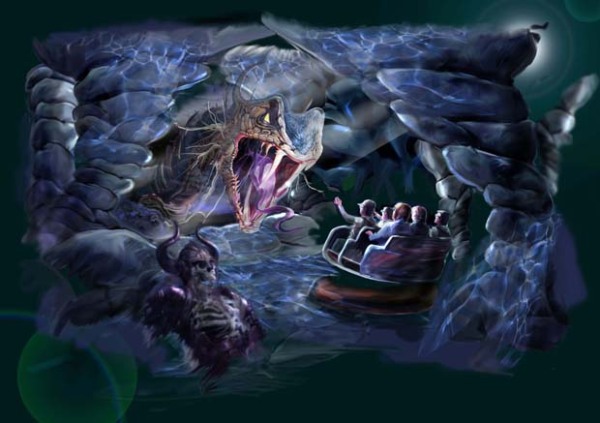