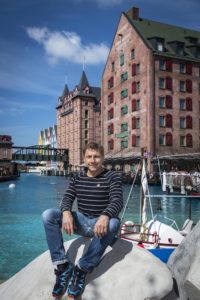 German actor Richy Müller was very interested in exploring Europa-Park’s new 4-star superior hotel “Krønasår” on 22 May 22, 2019. The sixth adventure hotel of the Europa-Park will open open to the public on 31 May. It is a natural history museum of a special kind and offers stylish accommodation in a Nordic ambience for up to 1,300 overnight guests.

Richy Müller celebrated his breakthrough as an actor in 1979 with “Die große Flatter”, only a few years after the opening of the Europa-Park in 1975. Forty years later, Richy Müller is one of the most popular actors in Germany and the Europa-Park has repeatedly been considered the best amusement park awarded the world.

2019 marks an important year in the history of the company. At the gates of the Europa-Park, the impressive Rulantica Water World will be under construction until 28 November 2019. Right next to it is “Krønasår – The Museum Hotel”.

CEO of Grupo Xcaret recognised at HOLA Conference in Miami