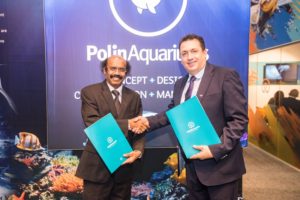 On the first day of the IAAPA Attractions Expo, an agreement was made between Mr. Ayhan Şentürk, vice-president of Polin Aquariums and Mr. V.G.P Ravidas, IAAPA board member and president of VGP Marine Kingdom. This agreement consists of the installation of acrylic panels and life support systems for the tunnel aquarium project in Chennai, India.  Polin Aquariums is proud to be able to help complete this project which had been stopped due to technical difficulties.  “It is an honour for the Polin family of brands to collaborate with VGP Marine Kingdom, a company known for its famous water parks,  theme parks, resort hotels and winter attractions (Snow Kingdom),” said Mr. Ayhan Şentürk.

VGP Marine Kingdom will be India’s first major public aquarium. Set in the VGP World Theme Park in the resort area of Chennai, the aquarium will serve the dual purpose of entertainment and education. VGP Marine Kingdom will be this first of many commercial Aquariums in India. The complex will include a restaurant, educational opportunities and exhibition areas. The total area for the Aquarium is 7,500m2  in 5 different concept zone and spread over three levels, there will be a underwater tunnel which is 48 meters long  it’s over 30 display aquarium tanks and 4.000.000 litres of water volume.