Denmark’s Legoland Billund is to get a brand new area for 2012 called Polar Land, anchored by a Zierer drop coaster.

The new additions represent a DKK 75 million ($14m/€10m) investment, the largest ever in the history of this, the original Legoland park.

Billed as the first coaster in the world to combine a five-metre-drop with live penguins, Polar X-plorer will reach a top speed of 65 km/h. Riders will race through an icy waterfall, past Lego polar animals, into a giant mountain and crashing through the “ice” into the drop sequence. The speed will then decrease, allowing passengers to enjoy the view of the penguins.

Totalling 12,500 square metres, the Polar Land concept has been developed by Legoland Billund designer Tom Christiansen. As well as Polar X-plorer, the new land will also include a restaurant overlooking the penguins and a flight simulator built out of the park’s old Power Builder (Robocoaster).

Located in the far corner of the park, the new land will replace the Event Area and be unveiled to the public in May, one month after the main park opening. 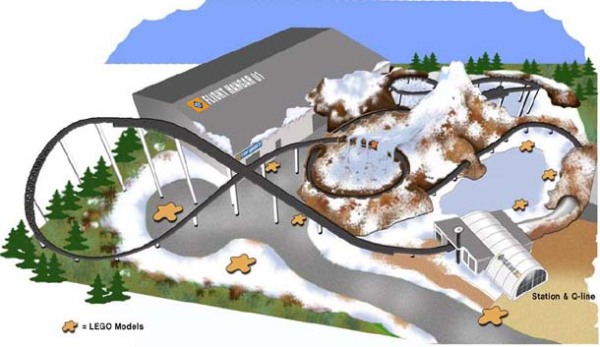