The 1,130ft-long (350m) Galveston Island Historic Pleasure Pier will open this May, featuring 16 rides including a rollercoaster, log flume and Star Flyer.

In the late 1940s, Galveston’s original Pleasure Pier was the largest of its kind in the United States. America’s top dance bands routinely filled the mammoth Marine ballroom and visitors watched motion pictures in an open-air stadium as ships passed in the Gulf of Mexico. A wide variety of rides and midway concessions were featured along the pier, together with a designated fishing area. For decades, the venue was a popular family destination, until it was destroyed by Hurricane Carla in 1961. Four years later the Flagship Hotel opened on the property, gaining the title of the only hotel in North America built entirely over the water. In 2008, it too was wiped out by a hurricane.

Landry’s chairman and CEO Tilman Fertitta hopes that the new Galveston Island Historic Pleasure Pier will capture a special place in people’s hearts, in the same way as Santa Monica Pier in California or Chicago’s Navy Pier. The nostalgically themed attraction will be reminiscent of another local historical landmark, Galveston’s Electric Park.

“Much of our plans for redeveloping the pier are inspired by the people and places that define Galveston’s rich heritage,” says Fertitta, a native of the island. “We intend to perpetuate that vision with Pleasure Pier and create a lasting legacy for future generations. We have a proven track record for projects of this magnitude and complexity, and understand what is required to convert today’s battered pier into a world-class venue.”

Situated on Seawall Boulevard at the junction of 25th Street, the rebuilt structure will hold between 6,500-7,000 people at a time. Traditional rides will include a 36ft (11m) Chance Morgan double-decker carousel with ride-on sea creatures, horses and chariots. The Galaxy Wheel will be a 100ft-tall (30m) Chance Morgan Ferris Wheel acting as a beacon for the pier with bright LED lighting. Pier Pileup is the name of the park’s Bertazzon bumper car track featuring antique and classic cars. The Italian company will also supply a Wave Swinger called Gulf Glider.

Iron Shark will be a Gerstlauer EuroFighter coaster with a 100ft vertical lift and beyond vertical drop, followed by four inversions including a diving loop and a backstretch that cantilevers over the water. The ride will feature 1,300ft (400m) of track and reach speeds of up to 50mph (80kmh). Pirate’s Plunge will be a twin-drop log flume by the Anglo-French supplier Interlink, featuring both a 22ft and 42ft drop. Texas Star Flyer will be a 200ft-tall (60m) Funtime Star Flyer, billed as the tallest tower swing ride in Texas.

A Frisbee-style Revolution ride by Chance Morgan will swing out over the water, as will a Sea Dragon pirate ship by the same manufacturer. Sky Shooter, an SBF-Visa Airborne Shot Sky Shooter will let riders control the “fly-out” feature of the arms, while the 60ft-tall Cyclone (Fireball) by Texas’ own Larson International will travel both forward and backward inside a giant loop. Another Bertazzon attraction will be a Musik Express called Rock & Roll. Children’s rides will include an S&S Frog Hopper drop tower, Zamperla tea cups and SBF Visa big-rig truck ride.

In addition to Texas’s first ever Bubba Gump Shrimp Co restaurant, the pier will offer seven quick service food and beverage outlets, a gift shop, candy store and entertainment stage. Entry will be $10 for adults or $8 for children 4ft (1.2m) and under, with all-day ride passes costing an additional $15.99/$11.99. 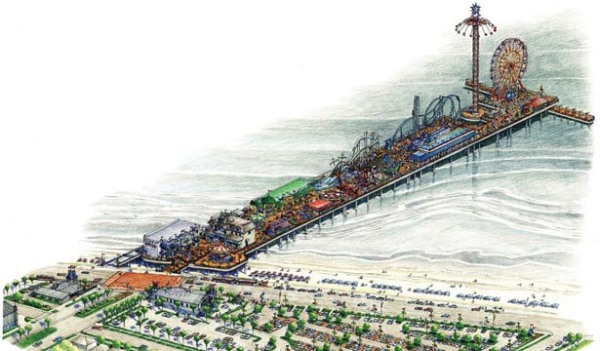 The Landry’s group is moving ahead with a new multi-million dollar amusement outlet in Texas.

With the Galveston Island Historic Pleasure Pier, Landry’s hopes to reignite interest in the area, promote tourism, economic growth and bolster civic pride. Here’s hoping there are no more hurricanes on the horizon.

From family-friendly offerings like the Rainforest Cafe and Bubba Gump Shrimp Co to the upscale McCormick & Schmick’s or Oceanaire, if you’ve even eaten in one of these places you’ve been a guest of Landry’s. The restaurant, hospitality and entertainment group is headquartered in Houston, Texas, and boasts a portfolio or around 30 restaurant brands specialising in seafood and steak, with outlets across the United States.

As well as its amusement parks – Kemah Boardwalk and the soon to open Galveston Island Historic Pleasure Pier – Landry’s also operates four Downtown Aquariums, some with rides, in Denver (Colorado), Nashville (Tennessee), Kemah and Houston (Texas). So whether you want to marvel at a fish or eat one for dinner, Landry’s has it covered.

Pictured below: Iron Shark’s vertical lift hill under construction at the Gerstlauer factory in Germany 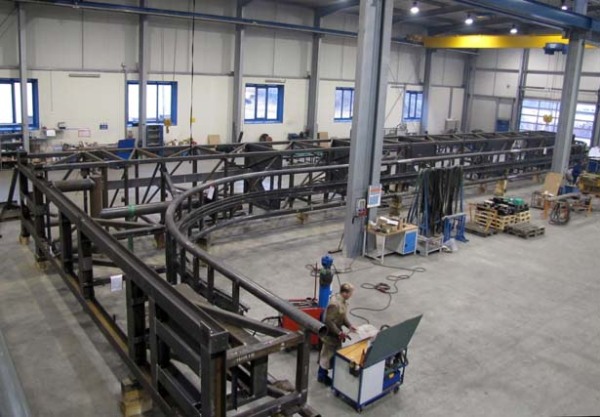