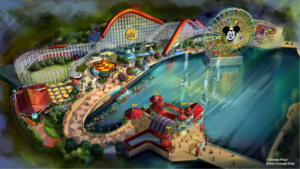 The wonderful worlds of Pixar will feature at Disney California Adventure Park when Pixar Pier opens in summer 2018, transforming the area that is now Paradise Pier with the new Incredicoaster, four new imaginative neighborhoods, plus entertainment, themed food and beverage, and merchandise.

Pixar Pier, a permanent land along the southern shore of Paradise Bay, will debut during Pixar Fest, a limited-time event that begins April 13, 2018.

The Incredicoaster, permanently transformed from the attraction that is now California Screamin’, will invite guests into a mid-century-modern-style loading area where they board vehicles with a distinctive, new look. New character moments, new scenes and special effects, and an exciting musical score will connect the attraction’s story to Pixar’s The Incredibles 2, which opens in theatres June 14, 2018.

A fourth new neighborhood will celebrate a collection of guest-favorite Pixar stories. Mickey’s Fun Wheel will be themed with a new look and each of the 24 gondolas will showcase a different Pixar character. At the Games of the Boardwalk, which currently includes a game called Bullseye Stallion Stampede, guests will find that all the midway games will be inspired by Pixar characters. New games are expected to include characters from A Bug’s Life, La Luna and WALL·E.