“Currently, Jora Vision is in the detailed design stage of the project, developing not only theming design, but also coordinating other disciplines such as lighting, audio, video hardware and content, special effects and operations,” explains Robin van der Want, project development director at Jora Vision.

The 5,000 square-metre attraction, called Los Piratas de Bacalar, will combine a cultural walk-through with live actors, and be part of the larger retail, dining, and entertainment district of the Amikoo theme park complex.

Developed to be a stand-alone experience, Los Piratas de Bacalar will feature its own fully themed buffet restaurant and merchandise shop – both inspired by the pirating history of the Mexican Riviera Maya. The fortress of Bacalar, Fuerte de San Felipe; built by the Spanish Navy in the 18th century, also played a role in inspiring the design. 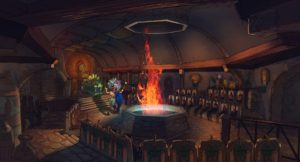 The walk-through lasts for 50 minutes and will take visitors through several rooms to encounter live actors and animatronics, special effects, and a ride system. These amusements all draw from the real-life events of the 18th century, where pirates attacked several ships and towns built by the Spanish and Mexican locals.

Guests will be guided around the fortress in groups of 60. Then, they will meet Capitán Nicolas Pacheco and his crew before being prepared for battle on the Caribbean Sea. The walk-through culminates in an Immersive Tunnel developed by ride supplier Simworx – the ship-themed vehicle seats 60, and via projection technology and special effects, visitors will engage in maritime pirate battles and a mythical sea monster named Cipactli.

Los Piratas de Bacalar extends its maritime inspired décor to the park’s dining area, where multiple times a day the restaurant will be “under attack” by the Spanish Navy. Visitors can enjoy themed animatronics whilst they dine on food that also has connections to the history of Campeche. 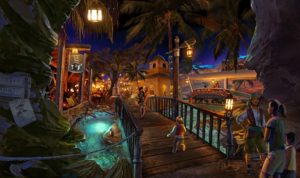 In contrast to how most theme park attractions are developed, Jora Vision approached Los Piratas de Bacalar from a different perspective.

“Theme park attractions are designed in the context of a theme park; this type of attraction has to stand on its own,” explains van der Want. “Guests pay separately, meaning they expect value for their money in terms of time. A short experience will result in unsatisfied guests. Therefore, attractions found in theme parks, such as 4D theaters, roller coasters, or flying theaters can not simply be implemented without adding pre-shows, exhibits or other types of experiences to increase length and add experience value. In Los Piratas de Bacalar, which has an Immersive Tunnel show at the end, we have integrated 8 pre-shows, all telling a single coherent story to create an immersive experience”.

Los Pirates de Bacalar is scheduled to open in 2019.

Jim Button hops aboard at Europa-Park