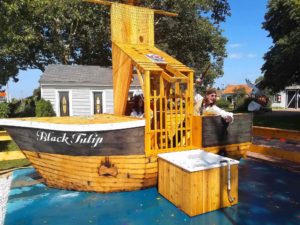 Now in its 61st year, Dutch Village, Holland, Michigan, has introduced their new Pirate Balloon Battle. From Water Wars, the two water balloon launching stations that are apart from each other, hidden inside two ships. One is a pirate ship called the Black Tulip and the other is a Dutch East India Company ship called the Delft Princess.

“It’s a warm-weather attraction,” explained Dutch co-owner Joe Nelis, “because when people use it, they get wet — depending on how good they are at aiming. We’ve made a nice investment there. If you drive past the village on the highway, you can see the ships. We’ve had a lot of people asking about them.”