Phantasialand’s next world of wonder

Two years on from introducing one of the world’s most unique and highly-themed flume rides (Chiapas), the German park Phantasialand has introduced another immersive new world.

Klughheim features two brand new rollercoasters and a whole heap of theming. To celebrate its official opening this June, Sebastian Jonas, project developer and quality manager of Phantasialand, explains the lengths the park near Cologne has gone to in order to create a “tailor-made” experience for its guests.

At Phantasialand we create whole themed worlds with attractions embedded in them; not just attractions with “a bit of theming.” Where new developments are concerned, one thing is particularly important to us: combining absolute ride enjoyment with extraordinary theming to create a unique overall experience. This only succeeds if we deal intensively with each detail right from the start. Working on new projects, we develop quite precise specifications which we pass on to the manufacturers. This then affects every single aspect of the project such as the capacity of the ride, the look of the track and also the route/layout.

So as with all our projects, from the earliest development phase onwards we had quite a specific idea of what we wanted Taron to do: the rollercoaster length, track and train design, thematic embedding and above all rider enjoyment. We worked all that out right down to the smallest detail to create an attraction that cannot be found anywhere else in the world.

We wanted to create an experience with a dramatic arc that builds continuously throughout the ride. For this we specified elements such as S-bends, airtime hills, over-banked turns as well as special changes of direction (a trick we have used previously on Chiapas and our Winjas Force/Winjas Fear rollercoasters) and also changes in speed as the ride makes its way through the rocky landscape of Klugheim. Taron will offer enjoyment and surprise right until the very end!

The start of the ride was also important to us. We were particularly keen on a very strong launch. This meant it needed a drive superbly equipped for the two LSM catapult launches; only the most up-to-date and high-performance technology should be used. We want Taron to be powerful and more intensive than any other multi-launch coaster out there – and enormously fast.

When it came to the track, we demanded a particularly delicate framework. The “3-belt” track supplied by Intamin in accordance with the new Eurocode 3 standard offers a slender aesthetic that ensures the harmonious integration of the rollercoaster into the Klugheim themed world. Even the ride’s supports could not be square “standard” supports and had to be round to fit aesthetically into the overall picture.

The train of course also had to comply with this philosophy. We had specific ideas on all details, from the seat position and the straps right through to the materials used, creating a completely new custom-built train that looks at home within this new part of the park. 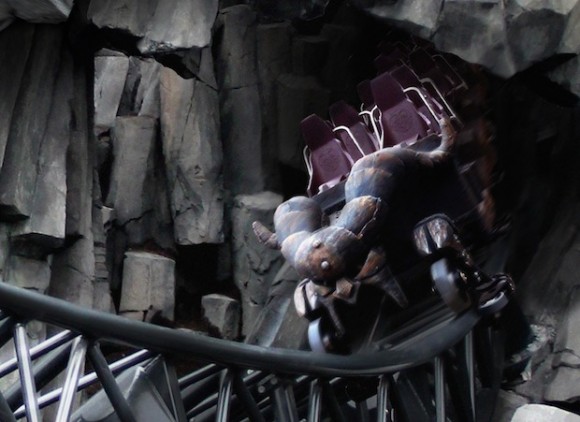 In looking for a manufacturer that would support us with all our special requirements and bring just as much passion to the project as we had ourselves, we knew we could turn to Intamin. With its special LSM drive system, we were confident the company could deliver the intensive launch we wanted as part of the Taron experience.

Intamin carried out all our requirements down to the final detail, from the development of the dramatic ride route to guaranteeing winter performance so that the coaster can function perfectly even in severe frost. To ensure this, the ability of operating the ride at up to –10°C outside temperature was essential, instead of the mild 8°C common for most attractions. It was a very big ask, yet no problem for Intamin to implement.

With much commitment and great skill, the manufacturer has caused Taron to come into being just as we imagined it. The track layout is in our eyes a real masterstroke within the space available. Packed tightly into the mighty cliffs of Klugheim, the track crosses over itself an incredible 116 times – a world record.

For us, Taron was never going to be just an everyday “off the peg” project, but one that required a lot of skill and innovative spirit from all involved. I can’t wait to see the first guests experience the new attraction. Hopefully they will all agree: we have created another tailor-made Phantasialand masterpiece! 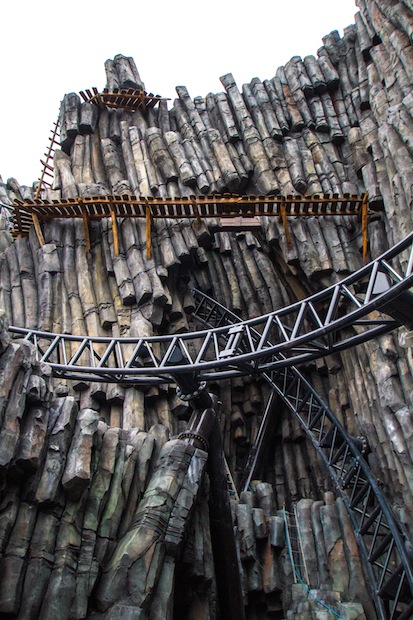 Two coasters and a whole heap of theming

When it opens (date to be confirmed), Klugheim will be Phantasialand’s latest themed world. Incoportated into the Mystery themed area of the park, the new land will feature a rocky terrain with basalt style columns reminiscent of the Giant’s Causeway in Northern Ireland and other volcanic rock formations like it.

Headline attraction Taron promises to be Europe’s fastest double launch coaster (beating Juvelen at Djurs Sommerland in Denmark, also by Intamin). Although the park is being tight-lipped over the exact speed and length of the ride, we are told it will also be the world’s longest LSM multi-launch coaster.

Expected to appeal to a slightly younger demographic, Raik will be a custom model Family Boomerang by Vekoma, the largest yet supplied by the Dutch company.

Särkänniemi has the X factor