A former general manager of the Latin America and Mexican Association of Amusement Parks and Attractions, Reyes has staffed IAAPA’s regional office in Mexico City since October 2009, as well as serving on the association’s Latin American Advisory Committee. An undergraduate of the Universidad Iberoamericana in Mexico City, she also boasts a degree from the Universidad Complutense de Madrid in Spain and speaks four languages including Spanish, Portuguese, French and English.

How did you end up working for IAAPA?

I practically grew up in the industry! My father used to have some attraction at an amusement park in Mexico, Reino Aventura, which is now Six Flags. I started working there so my contact the industry has always been very close. Then I started working with the Mexican association, then the Latin American association. I worked there for eight years, during which time I also worked as liaison to IAAPA, so that’s how I got involved with the association.

How does the office in Mexico help members in Latin America?

A lot. We are now offering full services in the region in Spanish, which is very, very important, and with some help from our representative in Brazil, Portuguese. Sometimes, depending on the area, people do not feel comfortable or part of things but now with the office in the region they feel more involved and we have seen the number of embers increase.

What are some of the biggest issues for your members right now?

The biggest concern right now is high import taxes. There are not many ride manufacturers in Latin America, so we have to import a lot of equipment, including from Italy. In some countries, for example Brazil, the price of a ride can increase by 100%! The Latin American Advisory Committee and national associations are now working on this. My experience is that many parks are now producing the theming and some of the rides themselves.

Which operators are doing a good job?

We have a lot! I would say Kidzania are doing a great job in Mexico with their children’s role-playing concept. They are very professional and also doing a lot of projects abroad. In Argentina, a great operator is Neverland, who are also going abroad and recently did two FECs in Spain. In Brazil there are some very good parks like Beta Carrero World, and then in Guatemala we have IRTRA with Mundo Petapa and Xetulul Park, which won the IAAPA Applause Award last year.

Are you seeing much consolidation or activity from foreign operators?

That’s happening, but most of the time it’s coming from people who are not already in the industry but are exploring opportunities, so they buy parks. There are not really many foreign players, they haven’t looked to Latin America yet, but they will start looking, because there are opportunities here.

I am seeing a trend for edutainment. There are a lot of projects out there that are combining entertainment with education, like Kidzania and also Divercity. Then, in Peru, there is La Granja Villa y su Mundo Magico, which is a park that mixes animals with entertainment and education and also ecological; kids can go there and learn how to plant.

What attractions should we look out for in the coming year?

There’s a lot of ecological projects and a lot of FECs coming. In Argentina, Neverland has a new FEC project and Divercity is opening one in Lima, Peru. In Mexico I am aware of four new FEC projects including Cartoon Network in Puebla and a new Kidzania concept in Mexico City, plus a small park project in Yucatán in the south of the country. I know also that KIdzania has a project in Santiago, Chile, as well as several overseas projects, including plans to open in the US.

Do the national tourist boards in the various counties do enough to promote parks and attractions?

No, and I know this is something they are trying to do in Columbia, to get their parks recognised as tourist attractions. You know, I think it is our job in Latin America to take the next step and let people know we are important as an industry, and that’s what we intend to do via IAAPA and the national trade associations.

Pictured below: Neverland in Argentina 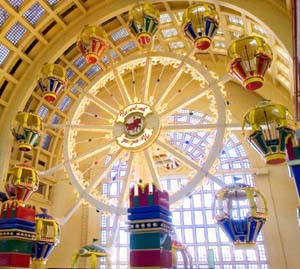