Park security – are you doing enough?

Dennis Speigel argues that it’s time security procedures at leisure facilities around the world were reviewed for the benefit of both employees and guests.

This year, there have been numerous high profile security invasions and incidents throughout the world, including last month’s horrendous shopping mall shootings in Nairobi, Kenya. Just this year in North America we have had an attack on US naval facilities in Washington DC, school shootings in Newtown, Connecticut; a bombing at the Boston Marathon and mass transit bombing attempts in Toronto, Canada. There have been more issues in Europe, and ongoing incidents in the Middle East. As I write this, 19 US embassies are closed until further notice.

This is not an easy topic to discuss, but a necessary one to address. Recently I visited some major theme parks in the USA. Quite frankly, I was appalled by the security I encountered at the front gate entrance points. Basically what I encountered was a security guard poking around in purses and backpacks for about three to five seconds with a wooden stick. If someone had wanted to sneak something into the park, I can assure you it would have been relatively simple. The searches I encountered and saw were at best superficial – no true invasive search. Just recently, a 9mm semi-automatic weapon was found in a guest’s seat at a Disney park – Animal Kingdom. How did it get through security?

When people come to our theme parks, of course they are not thinking about being frisked or scanned upon arrival, but the realities of today’s world dictates operators undertake proper security measures. We must do our utmost to establish a high level of security, no matter what encumbrance is met (within reason).

By and large – and I mean 99.9% – of the guests who visit parks do not mind being searched, scanned or passing through electronic security gates. The typical guest mentality is, “If it makes my visit safer, I couldn’t care less if I am checked when entering a park.” Only those trying to conceal something care.

There is a park in the USA that recently re- introduced unobtrusive security gates. These gates were virtually hidden in the architecture of the park’s entrance. Signs were posted prior to passing through the entry portals about, “No guns, knives, or other types of weapons” being allowed into the park. After re-instituting the gates, park officials said they were absolutely shocked by the types of contraband they found – guns, knives, ice picks, brass knuckles, blackjacks – not to mention other items which were found upon further search. It happens, but needs to be better guarded against to prevent future occurrences.

After September 11, 2001, a private meeting of park executives was convened in Orlando to discuss security measures. All of the main operators in the USA, and some from overseas, were in attendance. In fact, it was the first time that certain high-level officers had met one another. As a result of that meeting, it was concluded that security needed to be “stepped up” at parks. So, security measures at many parks were improved. A major operator enlisted dogs to assist in its security efforts.

But, after a few years, the security at many facilities grew lax again. Not just at theme parks, but also at other mass public venues such as concerts, sporting events and public transportation. About the only area that has maintained and intensified is airport safety. Security at airports, while cumbersome at best, has attempted to improve and broaden its scope. While not all of us would agree that airport security has improved, particularly if you are a frequent traveller, there nevertheless are continuing changes.

Security has crept in to become a regular part of daily lives – at banks, shopping malls, supermarkets, schools, hospitals and even now some churches. Today, there are cameras located at traffic intersections, at heavily travelled sidewalks in towns and cities, in stores, outside of stores, and in places we

never see – monitoring our every move. It is expected. As atrocities continue to occur across the globe, we

have to be more vigilant about security in our entertainment facilities. Whether human, electronic, animal, or some other form, security measures need to be continually explored, employed and heightened. It is important that whatever measures you put in place cannot be questioned if some dire event were to occur. We owe this to our guests, our employees and to ourselves. Safety is the hallmark of our industry. It is employed in everything we do – especially in the way rides and attractions are operated – but now it is time to pay equal attention to the safety of the facilities themselves.

Dennis Speigel is president of International Theme Park Services, a leading independent management/consulting firm based in Cincinnati, USA. Dennis boasts over 50 years of leisure/theme park experience and is a former IAAPA president. Reach him on +1 513-381-6131. 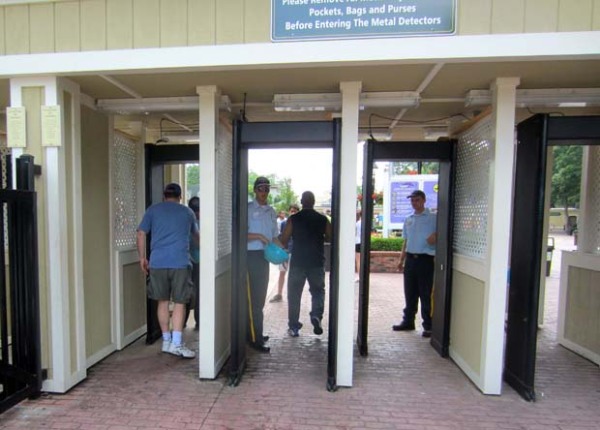