It was one of the busiest Euro Attractions Shows ever, with a record number of exhibitors and a most memorable party. Owen Ralph reports from EAS in Paris.

According to figures from organiser IAAPA Europe, 8,584 attractions industry professionals attended the three-day event from 18 to 20 September at Paris’ Port de Versailles exhibition centre, where they could walks two floors of halls filled with exhibits from a record 393 companies. 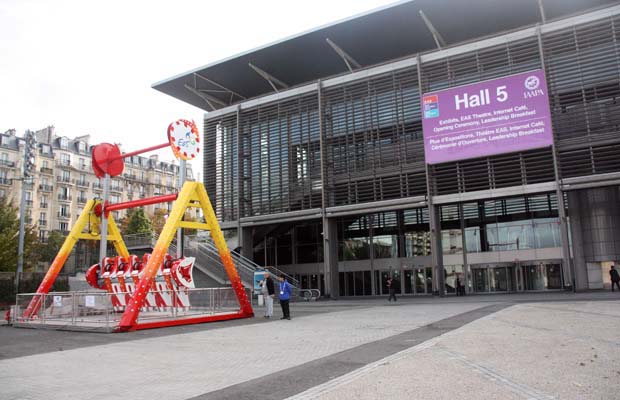 The busiest EAS in its nine-year history with IAAPA was in fact the 2010 event, when more than 9,000 passed through the doors in Rome. Yet for many exhibitors that show did not feel so successful at the time, and the buzz in Paris, and last year in Berlin (attendance 8,138), seemed better. Time will tell what business develops down the line, but for now we can report that of those visitors last month in Paris, 5,813 of them were classed as buyers.

A fully-fledged event for operators of theme parks, amusement parks and other attractions, not forgetting Europe’s strong travelling fairground sector, EAS offers plenty in addition to trade show exhibits. More than 1,500 attendees (up 25% on last year) sat in on the accompanying education programme, which offered 20 hours of seminars and panel discussions on a wide range of topics. Ahead of the show there was a number of events at Disneyland Paris (see “What a difference a decade makes”), meanwhile on Thursday morning Euro Disney president Philippe Gas was the speaker at the third EAS Leadership Breakfast.

Always a well-attended event, the EAS Opening Reception was particularly special on this occasion as 1,200 guests made their way across town to network with industry colleagues amid the enchanting fair and carousel artefacts at the Museé des Art Forain in Paris-Bercy. Here they could feast on a rich platter of food and drink, hop on board some of antique rides and try their luck at the games from the collection of owner Jean-Paul Favand; a lucky few even got a tour of the sheds containing the other 90% he doesn’t have room to display. A real treat! Additional receptions and parties were hosted during the week by, among others, the Themed Entertainment Association (TEA), the Association of Amusement and Leisure Equipment Suppliers of the United Kingdom (ALES-UK), Zamperla and Kirmes & Park Revue magazine, which unveiled the winners of its second European Star Awards. Before, during and after the show behind-the-scenes tours were offered to Disneyland Paris, Parc Astérix and, somewhat further a field, Puy du Fou, Futuroscope and the wonderfully idiosyncratic Machines de l’île in Nantes.

“IAAPA has done a great job or growing this show,” Vekoma’s Charlotte van Etten told Park World. “The traffic was good, the floor looked very attractive, the party [Opening Reception] that we sponsored was very special; all in all this show has earned its presence and I complement the organisation.”

“Berlin and London [2011] were good, but this has been our best EAS for the past five years,” offered Sohret Pakis of Polin Waterparks & Pool Systems. “I still believe in the power of trade shows, and as the number one waterpark supplier to France, we did well. I am so glad we had two French-speaking representatives on the booth though!”

“We are local, so the show has been good for us,” confirmed Henry Corrado of theming and design specialist Tejix, based close to Disneyland Paris in Marnee la Valleé . “There has been a good amount of French visitors, which is good because the French do not travel much; for many it is their first IAAPA exhibition. We’ve also seen many of the big parks and groups from across Europe.”

“It’s nice to meet up with so many people we already know,” said Jérôme Giacomoni of tethered balloon specialist Aerophile, which was offering interested parties a free flight on its Ballon de Pairs, just a short tram ride away in Parc André Citroën. “We hope to have four more balloons installed in 2014 and have also had a lot of interest in our Aerobar concept.”

“We are not complaining,” added the Fabbri Group’s Edward Cromheecke. “We sold two mobile 55m Booster XL rides, to Belgium and the Netherlands, as well as introducing several interesting new concepts for parks.”

Fellow Italian manufacturer EOS Rides contributed a small stand-up swing ride outside the smaller of the two halls, however the days when manufacturers exhibit large numbers of rides are long gone. But their were various cars and gondolas on display, such as Mack Rides’ new Helix train for Liseberg (Sweden), Sunkid/Heege’s new Butterfly ride vehicle for Familypark Neusiedlersee (Austria) and Garmendale’s new Motion Master – one of multiple dark ride concepts demonstrated this year at EAS. 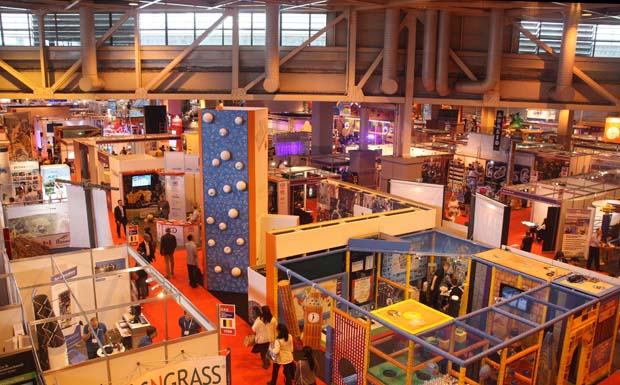 A regular fixture of many amusement industry trade shows over the past few years has been Triotech’s XD interactive theatre, however the Canadian company decided not to show such a product on this occasion, so that it could focus on newer concepts such as its iDR interactive dark ride. “I think we got the message home,” spokesman Christian Martin told us during a drinks reception on his booth on Thursday afternoon.

“The exhibition was better than expected, but then our expectations were not so high,” reported Siegfried Gerstlauer of Germany’s Gerstlauer Amusement Rides. Whilst he conceded that large rollercoaster manufacturers like this do not necessarily come to trade shows to sell rides, he added that he has “seen people from all over Europe” and was looking forward to another busy schedule in 2014 following a particularly prolific 2013.

Looking a little further beyond the central European territories, Martin & Vleminckx partner Chuck Bingham observed that, “Turkey is big at the moment. It would be great if we could sell the first wooden coaster there, like we did in China. That opened a lot of doors for us.”

“Working internationally, it was great to see the show in our home country this year,” remarked Emmanuelle Charotte of multimedia show producer ECA2, which was walking the aisles but not exhibiting at EAS (though it does participate in IAAPA’s Asian Attractions Expo). “Through the different conferences and meetings, this event demonstrated the trend and increasing importance of night time shows on the European market and worldwide.”

“We are delighted that EAS has been in Paris this year,” concluded Sophie Huberson of the French attractions association SNELAC. “Many of our members came to meet the industry, see new products and take advantage of seminars organised by IAAPA Europe. Anything that can help to professionalize and develop the business is important for SNELAC.”

Euro Attractions Show 2014 takes place from 23 to 25 September in Amsterdam, a popular choice back in 2009, before the first Scandinavian edition of EAS in 2015. If you’re in the parks or attractions business in Europe, you’ll want to be there.

What a difference a decade makes

The last time EAS, then known as the Euro Amusement Show, visited Paris was in January 2004, when it took up residence at Disneyland Paris. Although the IAAPA entourage jetted in for the opening ceremony, it wasn’t until the following year’s show in Vienna, Austria, that the association took full control of the event from the European supplier association EAASI.

It is perhaps a sign of IAAPA’s influence that this September’s show enjoyed better access to the Disney facilities than in 2004 – despite being held almost 50km away. No fewer than three EAS events took place at the Disneyland resort ahead of the main trade show, including the IAAPA Safety Institute, the IAAPA Institute for Attractions Managers and a behind-the-scenes park tour. And of course Euro Disney president Philippe Gas addressed Thursday morning’s Leadership Breakfast at Port de Versailles, teasing new developments including Villages Nature and next season’s Ratatouille dark ride.

EAASI’s appointed organiser got a bad deal at Disney almost a decade ago, but so too did the exhibitors, many of whom still talk about the marquee which hosted the event and, thanks to some fierce winter weather, almost blew away! There seems little chance of the strong Euro Attractions Show of today going anywhere in a hurry.