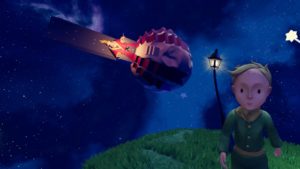 rench aerial theme park the Parc du Petit Prince will launch two new attractions for its spring 2018 season. Visitors can immerse themselves in the universe of the park’s mascot Little Prince through a new virtual reality experience, and can go on a unique journey in space accompanied by the hero of the year, Thomas Pesquet.

‘Virtual Flight with the Little Prince and Fox’ sees visitors equipped with a virtual reality headset. They take their place on board a hot air balloon basket, and are immersed in a 360 ° film that will let them feel the reality of the flight.

The film, lasting five minutes, was made from images of the park from each of the balloons. Passengers can see an aerial view of the entire park, and its spectacular surroundings. For an additional 2 euros, the visitor can accompanies the hero on a VR journey from planet to planet, created by Red Accent Studio.

The second new attraction is a film about French aerospace engineer, pilot, and astronaut Thomas Pesquet, called ‘In the eyes of Thomas Pesquet’ Dedicated to the mission of the astronaut French on board the International Space Station, the film will be broadcast exclusively at the Grand Cinema of the Parc du Petit Prince at the reopening.

Like the Little Prince, Thomas Pesquet flew over our planet, witnessing both its fragility and its beauty, and it is this incredible adventure that the Park will share with visitors throughout the 2018 season. Visitors can also observe the planets during two major nocturnal events taking place in 2018: the lunar eclipse on 27July, and the night of shooting stars on 4 August.