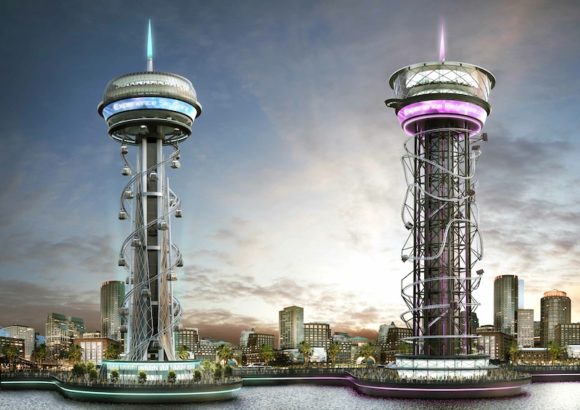 Bill Kitchen has launched a new company to raise capital to accelerate the building of Polercoaster and SkySpire attractions across the United States.

ThrillCorp Inc plans to raise up to $50 million by offering shares to investors so that they can “own the thrill”. Kitchen previously created the Skycoaster giant swing and iFly indoor skydiving attraction, which have generated more than $2 billion in revenue to date.

Standing up to 600ft (183m) or more – the Polercoaster (above right) requires only a half-an-acre (2,023 square-metres) of land. It can be configured to include a rollercoaster, drop ride, zip line, skywalk and observation deck.

“We make the best park attractions more thrilling by going taller,” notes Kitchen. “We put them where people can use them more frequently and at a much lower cost than a theme park. We make it a casual outing as opposed to a full day’s commitment. It is a new category of experience.”

SkySpire (above left) also uses a tower as its base, but as opposed to a thrill ride is marketed as an observation experience; an alternative to a giant Ferris wheel. It transport guests via spiralling gondolas to the top of a tall tower where they can disembark onto an observation level that can incorporate a lounge and/or restaurant.

ThrillCorp‘s crowdfunding effort, offered via the US Securities and Exchange Commission’s new Regulation A+ rule, aims to provide the capital to develop one or more projects – although the company claims the sky is the limit. Between 30 to 50 viable markets have been identified in the US alone. Rides are already in development for Orlando and Atlantic City.