Fun, food and good living. These three things are key to the business of the Only World Group, a stalwart of the Malaysian amusement industry. Park World editor Owen Ralph catches up with the man dubbed “Malaysia’s theme park king.”

It was a business trip to California back in the ‘70s that convinced Dato Richard Koh (pictured) to enter the amusement industry.

“My manager took me to Disneyland,” recalls the Malaysian entrepreneur of Chinese descent. “It was the first time I had ever been to Disney, but it gave me the idea I would like to do something like this in Malaysia. I was always looking for opportunities.”

Koh, who was awarded the honorary Malaysian title of Dato by the Sultan of Selangor in 2003, founded World Equipment in 1973 as a supplier of office equipment, later diversifying into car care and automotive upholstery. Today, the Only World Group, of which World Equipment is part, boasts an even more diverse portfolio.

Thanks to its theme park consultation, design and installation services, the group is well connected throughout the industry in Malaysia, as well as operating its own food and beverage business, three waterparks, a handful of children’s play centres, roller skating rinks, a spa and waterfall resort. Koh serves as chairman of the group, which employs around 1,000 staff, including Jean, his loyal wife and chief operating officer.

As we sit down to chat at the couple’s large Kuala Lumpur home, Dato offers us a selection of local fruit. The chikoo is delicious, but for this businessman it’s a fruit of a different kind that keeps him going throughout the day. Richard Koh is a BlackBerry addict.

It’s late in the evening, but business doesn’t stop. There’s a knock at the door and one of his staff is let in to discuss plans for the new headquarters Only World Group is opening in a few weeks’ time. He reckons he can make substantial savings. It may just cover Koh’s phone bill.

President of the Malaysian Association of Amusement, Themepark and Family Attractions (MAATFA) for the past nine years, Dato Richard Koh has been active in the industry since the early ‘80s, and he is now a familiar face at many international get-togethers, such as Asian Attractions Expo and other IAAPA events.

His company began designing and building family fun centres and roller skating rinks throughout Malaysia, as well as operating kiddie rides in local shopping malls. After supplying a selection of rides, including a Pinfari Cyclone coaster, to the Johor Safari Park, he decided to open his own amusement park, Taman Subang Ria Park, 20km west of downtown Kuala Lumpur in Subang Jaya.

“That was our first big park,” remembers Koh. “All the other parks had old equipment.” Both the safari park and the amusement park have since bitten the dust as, “developers wanted to build houses on the land” (where have you heard that before?).

Nevertheless, Koh had succeeded in bringing a little amusement park magic into Malaysia. Years after his visit to Disneyland, he had been bitten by the “Mouse” and, as we all know, once infected it’s hard to find a cure.

In 1996, Wet World waterpark opened in Shah Alam, and a year later debuted the first Master Blaster water coaster outside North America. Koh, who at the time was acting as an agent for NBGS, went on to install a larger, family version of the ride at Desa Water Park in Kuala Lumpur in 1999. Designs for other waterparks followed, but the Wet World brand was his own, and he established further parks near Negeri Sembilan and Johor in southern Malaysia.

Marketed as “neighbourhood” waterparks with a low admission price, Wet World operates in a different sector of the market to Malaysia’s more high profile resort parks like Sunway Lagoon and Genting Highlands, but Only World Group has interests there too.

Riding around the venue in a golf kart with Sunway Lagoon CEO Aaron Soo, it’s clear he and the Only World Group boss enjoy great camaraderie. Koh, however, is happy to take a back seat (it gives him chance to get back on his BlackBerry).

Parks of all Sizes

Soo is keen to show us his new animal habitats. “How long do you think they have been here?” he asks. Blending in with their forest-like surroundings, they look like they have been here forever, the “natural” theming belying the fact they are just a year old.

Billed as “a tropical oasis in the heart of the city,” Sunway Lagoon is a unique offering, combing several different but complementary parks in an apparently natural setting that is in fact completely manmade.

At the opposite side of Kuala Lumpur, about an hour’s drive north, is Resorts World Genting. This large hotel and casino complex is located 7,000 metres above sea level and, for those of us without a helicopter, the only way to reach it is a via a long and winding 20km access road. Vertigo sufferers or those without vehicles in tip top condition might want to stay away.

Still known to many as Genting Highlands, the resort was rebranded by Genting International as part of its Resorts World chain of properties, which also includes Resorts World Sentosa in Singapore and Resorts World Manila in the Philippines. Although gaming is the driver that keeps each venue ticking, family entertainment is also an important part of the offer in and Malaysia and Singapore.

The latter is home to the new Universal Studios park, where World Equipment had a hand in theming and installing several attractions. At Resorts World Genting, Only World boasts several of its own operations and, once again, all began when Koh supplied a ride.

“When the safari park closed, we took the Cyclone coaster up to Genting,” he recalls. “They didn’t care so much at the time for amusement, but I said, ‘let’s try it out. If it’s good you can buy it, otherwise we can do profit sharing.’ It did so well they bought it.”

Steadily, Koh’s company began kitting out the peak-top Genting Theme Park, installing such attractions as a Vekoma Corkscrew, Log Flume and an S&S tower ride. The most recent addition was the Flying Coaster (Volare), by Zamperla, although the Cyclone is still going strong. A package of new rides including a Zamperla Disk ‘O’ Coaster, Discovery and Music Express, SBF Miami and ProSlide Rocket Coaster will be installed towards the end of this year. 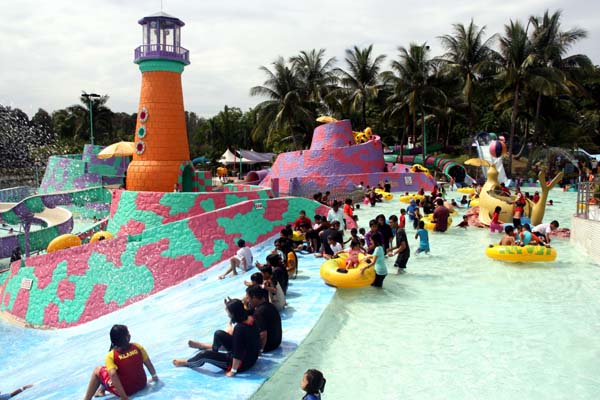 Adjoining the outdoor rides and attractions is the massive First World Plaza 24-hour entertainment complex. Here Only World Group operates Malaysia’s only Ripley’s Believe it or Not! “Odditorium,” a Haunted Adventure walk through show, Jungle Gym play centre and a selection of casual dining outlets.

For those that find First World Plaza’s round-the-clock entertainment a little too taxing, Only World Group recently opened the Pedas Springs family spa, which includes a neighbouring Jungle Gym adventure playground complete with children’s spa. The company also operates a handful of other play centres in and around Kuala Lumpur, together with two Roller Sports Worlds.

As Asian Attractions Expo arrives this month in Kuala Lumpur, many eyes in the amusement industry will be on Malaysia. Big things will be happening in the country over the next couple of years as major international brands such as Legoland, Hello Kitty and HIT Entertainment open attractions in the special economic zone of Iskandar in Johor.

“It will be like the Orlando of the East!” jokes Koh. But why all this activity now? “Johor is close to Singapore, where the spending power is higher, and also the government is giving some tax incentives.”

New attractions like this will encourage all operators to raise their game, and two of Only World Group’s Wet World parks are set for a dramatic transformation.

“The market is ready for branded, themed entertainment experiences,” believes Koh. “That’s why we are bringing SpongeBob SquarePants to Wet World in Shah Alam. It will be the first SpongeBob park anywhere in Asia and we hope to start construction towards the end of the year.”

At Wet World in Negeri Sembilan, Only World plans to use its excess land to develop a shopping mall and hotel, something the group’s chairman sees an important area of growth in the years to come.

“For now, supplying parks is still our main business. I enjoy catching up with the suppliers, I love travelling and seeing other attractions; it’s a fun business and I enjoy what I do. However, building hotels, shopping malls and other developments will be the next big challenge. That’s the bigger picture and it really interests me.”

So are any of Koh’s five children being primed for roles within the amusement business? “They’re all quite young, but my middle daughter, Qi-Ten, seems quite interested. She’s currently studying commerce and accounting at university in Melbourne, so we will have to see what she wants to do when she leaves.”

Qi-Ten had better be good with a BlackBerry.

The Wet World chain of waterparks is one of Only World Group’s key attraction brands. The first park opened back in 1996, spanning a 25,000 sq m site in the Kuala Lumpur suburb of Shah Alam. Its key attractions include the world’s first Master Blaster water coaster outside North America, although this is set to be replaced by a ProSlide Rocket Coaster as part of an upgrade and retheming of the park to incorporate the cartoon character SpongeBob SquarePants. Further Wet World parks appear at the Air Panas Pedas Resort in Negeri Sembilan and Batu Pahat in Johor, the latter earmarked for a major expansion including a shopping mall and hotel. Each Wet World is marketed as a “neighbourhood waterpark” with admission set at just RM10 ($3/€2.50), although this is expected to rise with the arrival of SpongeBob.

Malaysia’s first and still only Ripley’s Believe It or Not! outlet opened at Genting Highlands’ First World Plaza in 2002. The 12,000 sq ft “Odditorium” is operated on a franchise basis by the Only World Group and features over 500 unique curiosities. Also featured as part of the attraction is a Haunted Adventure walk through show.

Opening a Ripley’s in this high traffic location was a “no-brainer” for Only World Group chairman Dato Richard Koh: “I’d known Bob [Masterson, Ripley Entertainment chairman] for many years so when the opportunity came along at Genting I thought I’d better do one!”

The Only World Group boasts a portfolio of food and beverage brands including Only Mee noodle house, JR’s curry house, Shanghai 10, Jia, East Court, London Café, Hot Pot and Rich Dad. A large cluster of these can be found at Genting Highlands’ First World Plaza, although there are several outlets in and around Kuala Lumpur. One of the restaurants of which Only World chairman Data Richard Koh is most proud is Only Mee at First World Plaza. “Eatertainment” at its best, would-be diners are treated to a live show as a chef prepares the noodles behind a circular shop window to passers-by (as seen below). “My wife Jean is a good cook, but she knew nothing about noodles!” says Koh. “So we flew to Japan to learn, and it’s been a great success.”

In the south of Malaysia, near the Guning Panti Recreational Forest in the state of Johor, Only World operates the Kota Tinggi Waterfalls Resort. Here guests can enjoy a small waterpark, pool, spa, hotel accomodation and jungle walkways.

Pictured below: Ripley’s at Genting Highlands.