Hot on the heels of the opening of Eclipse at Gröna Lund in Stockholm, Sweden. Six Flags Over Texas has debuted Texas SkyScreamer.

Towering over 400 feet above the ground, the ride is the tallest Star Flyer in the world, a claim the folks at Gröna Lund are also making with their ride of similar height. At the top of this extreme swing ride by Funtime, passengers spin in a 124-foot-wide (38m) circle at 35mph beneath a gigantic Texas Lone Star, with the wind blowing in their faces.

By day riders have a breathtaking aerial view of the park and an amazing panoramic view of the surrounding area. By night it will be a totally different experience when the Texas SkyScreamer lights up the night. Six Flags Over Texas is located in the city of Arlington.

Meanwhile at Gröna Lund, Eclipse represents a major part of the park’s 130th anniversary celebrations. Built at a cost of SEK50million ($7.9m/€5.8m), the 24-passenger attraction enjoys a central position opposite the park’s live music stage, swinging riders high over the Stockholm waterfront, as seen in this spectacular shot below.

But which ride really is the tallest? Six Flags wins it. According to information received from Funtime, the ride in Texas is 123m tall, whereas Gröna Lund’s is “just“ 120m. So there you have it! 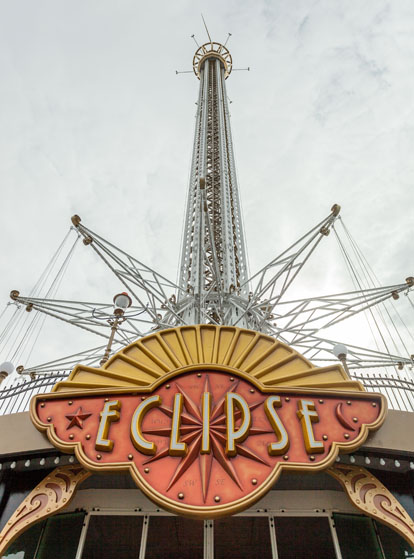