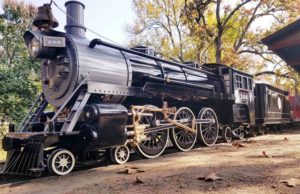 Western Train Co. has introduced the Northern Railroad. Inspired by by the Pere Marquette that was used in World War II to bring steel to the factories in Detroit, it was later memorialized in the book and feature film “The Polar Express.”

The Northern Railroad can transport up to 144 guests at a maximum speed of 11 mph (18 kph). It operates on 14, 15, or 24 inch gauge track. It is available powered by a 100 hp John Deere Turbo Diesel or electric motor and an Eaton Hydrostatic Drive transmission. It is fitted with disc brakes and 12v digital gauge instrumentation. If chosen, Western Train’s electric trains run silently across any venue, keeping passengers, zoo animals, and the immediate area free of harmful emissions and frightening engine noise. An electric train also removes the need to keep and store gas and diesel fuel in the facility.